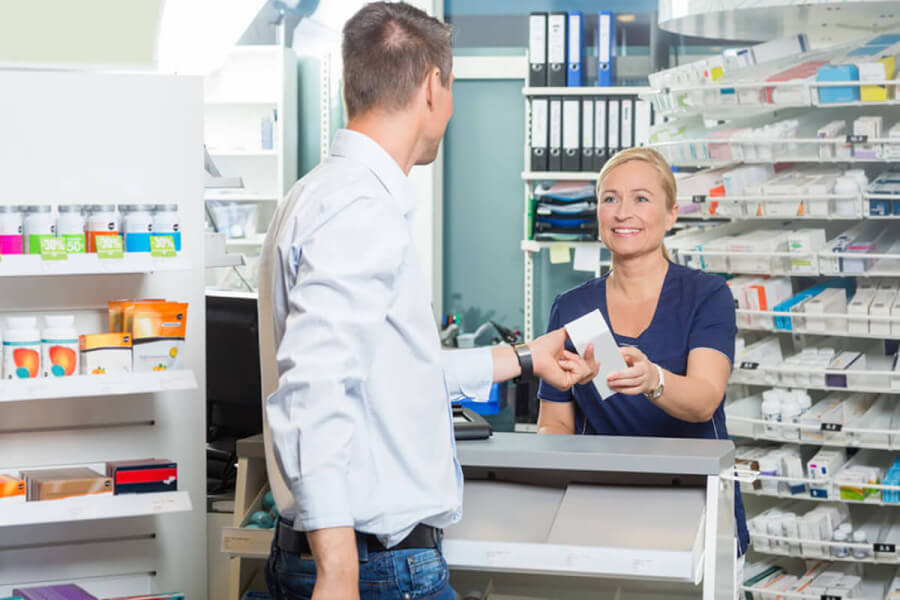 Viagra prices don’t vary significantly between major U.S. pharmacy retailers, but you can cut your cost per dose by splitting pills. And while ordering your Viagra from a reputable online facilitator such as eDrugstore.com might cost a bit more, you’ll get a number of extras and save precious time as well. [Español]

If you live in the United States, you are probably accustomed to paying high prices for prescription drugs. Even the largest pharmacy chains — including CVS, Walgreens, and Walmart — can reduce costs only so much with their enormous bulk purchases.

When it comes to buying 10 Viagra tablets of 100 milligrams each, costs are as follows at each of these chain pharmacies:

Many men with ED prefer to use a trustworthy online vendor such as eDrugstore.com to fill their prescriptions for erectile dysfunction drugs. The current price for 10 100-milligram tablets of Viagra at eDrugstore.com is $917.63, or about $91.76 per 100-milligram dose, or $45.88 per 50-milligram dose. That’s about $15 more expensive than at the major brick-and-mortar pharmacy retailers. The eDrugstore price quoted here reflects the final cost of the drug after using the 7 percent discount coupon available to all visitors to the website.

However, ordering your drugs from eDrugstore.com offers a number of benefits you won’t find at the chain pharmacies. These include a free consultation with one of eDrugstore’s team of licensed U.S. physicians for those who don’t yet have a prescription, a free prescription if the doctor deems it appropriate, and discreet delivery of the drug.

And the transaction can be completed without ever leaving the comfort of your home. Some men are uncomfortable with the idea of their local pharmacist knowing that they take an ED drug, so they use an online pharmacy for privacy and have the medications delivered right to their door.

The Cost of Treating ED

The cost of treating sexual dysfunction in both males and females is a subject of increasing interest  as baby boomers approach retirement age. The incidence of ED increases with age and with health conditions such as diabetes and coronary artery disease. But with the cost per 50-milligram dose hovering around $36 to $37, the expense can be difficult to justify for many people. Furthermore, neither Medicare nor most private health insurers cover the cost of ED drugs.

In 2005, Congress removed coverage for ED drugs from both Medicare and Medicaid, and many self-funded health coverage plans and private insurers followed their lead. A number of health insurance programs contractually excluded treatment for ED shortly after Viagra was introduced to the market back in 1998.

In the January 2011 issue of “Clinical Pharmacology & Therapeutics,” M.C. Hornbrook and J. Holup of the Center for Health Research, Kaiser Permanente, asserted that exclusion of insurance coverage of ED drugs “is arbitrary and discriminatory (particularly against older men) and has no business, medical, or ethical rationale. Coverage of ED prescriptions should be included in basic health benefits by all public and private payers and health-care delivery systems when indicated to maintain, restore, or compensate for the loss of function caused by disease, injury, or medical treatment.”

This should not discourage men with ED from discussing their concerns with a physician. Many doctors are willing to work with patients to help get the costs down, with techniques like the process described above of prescribing 100-milligram tablets that can be cut in half.

Insurance companies excluded erectile dysfunction drugs from their contracts for fear that the costs would be prohibitive. However, a study of a managed care claim database of 28 million individuals in 51 health plans in the United States found 285,436 claims for men with ED whose health plans covered that treatment.

Thanks to Viagra and other ED drugs, a diagnosis of erectile dysfunction no longer signals the end to a man’s sex life. The estimated cost of ED care — including physician evaluation, diagnostic procedures, and drugs — in health plans with 100,000 members or more was only about 71 cents per member.

Insurance plans that cover ED drugs are able to control costs by limiting dispensing of those drugs. For example, one plan allows coverage of up to six tablets per month, with plan members paying out of pocket if they want more. One study estimated median annual Viagra use at only 29 tablets per year or around 2.5 tablets per month. Whether such studies will eventually result in more plans covering ED drugs remains to be seen.

Since Viagra’s introduction to the market in 1998, its price has risen sharply.  The same has been true of Cialis. Pfizer, which markets Viagra, and Eli Lilly & Company, the maker of Cialis, both managed to hold on to market exclusivity for their respective drugs for much longer than most market observers predicted.

Things are beginning to change. Teva Pharmaceuticals’ generic version of Viagra, marketed under the name of the little blue pill’s active ingredient, sildenafil citrate, hit the market in December 2017. Under an out-of-court settlement between Lilly and several generic drugmakers, a generic formulation of Cialis is expected to come to market in late 2018.

Having staved off generic competition for as long as they have, the brand-name ED drug manufacturers have been able to price their drugs pretty much as they saw fit.

While the internet is awash in advertisements for so-called generic Viagra and Cialis, would-be customers risk not just their money but also their well-being by ordering such drugs, which often turn out to counterfeit. Generic versions of both Viagra and Cialis are legal in a number of foreign markets, including Canada, China, and most countries of the European Union. However, the consumer can never be sure of a product’s authenticity unless he purchases the drug directly from a pharmacy in one of those countries.

With a prescription, you can pick up Viagra from your local pharmacy or place an order from a reputable online supplier such as eDrugstore.com.

The increase in prices for ED drugs reflects the overall trend toward high rates of inflation for pharmaceuticals. A December 2017 report from AARP says that retail prices for popular brand-name drugs “increased substantially faster than general inflation between 2006 and 2017.”

As an example, the report notes that the retail prices of 267 brand-name drugs widely used by medicare beneficiaries increased by an average of 8.4 percent in 2017, compared with a 2.1 percent rise in the overall inflation rate.

In the twilight months of its market exclusivity for Viagra, Pfizer did its best to squeeze the most profit it could out of its iconic little blue pill. According to a report from the Financial Times, the drugmaker’s Viagra price had been jacked up 27.5 percent in 2017 by midyear.

if the convenience and confidentiality of ordering your ED drugs online appeal to you, pay a visit to eDrugstore’s erectile dysfunction page. there you will find additional information about Viagra, as well as all the other brand-name ed drugs now on the market. You can also learn more about the services offered by eDrugstore and place an order if you’d like.