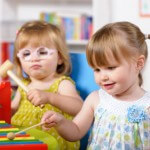 For years, health officials have watched childhood obesity rates climb. While there is still much work to be done, the Centers for Disease Control and Prevention says the trends are slowly staring to change. A new dieting report shows the U.S. is making progress with the nation’s youngest children, particularly those from low-income households.

According to CNN, researchers analyzed data from approximately 12 million children between the ages of 2 and 4 who participate in federally funded nutrition programs. Of the 40 states that were analyzed, 19 of the states had a “small but significant decline in preschoolers’ obesity rates” between 2008 and 2011.

“It’s a bright spot for our nation’s young kids, but the fight is very far from over,” CDC Director Dr. Tom Frieden said who spoke about the agency’s Vital Signs Report at a recent press conference.

Children who are overweight as preschoolers are five times more likely to struggle with weight problems as an adult. Carrying excess weight can lead to heart problems, diabetes and increased blood pressure.

Programs are paying off

Friden says programs like the Michelle Obama’s Let’s Move! program may be behind the reduction in rates.

New efforts aimed at exercise and eating right may be contributing to decreased obesity rates.

“Today’s announcement reaffirms my belief that together, we are making a real difference in helping kids across the country get a healthier start to life,” First Lady Michelle Obama said in a statement.

“We could not be more encouraged by the progress we have made, but we have a long, long way to go before we can rest and know the next generation is on a much healthier path,” said Sam Kass, executive director of Let’s Move! and the White House’s senior policy adviser on nutrition. “We will take this moment to double down on our efforts and really see this through.”