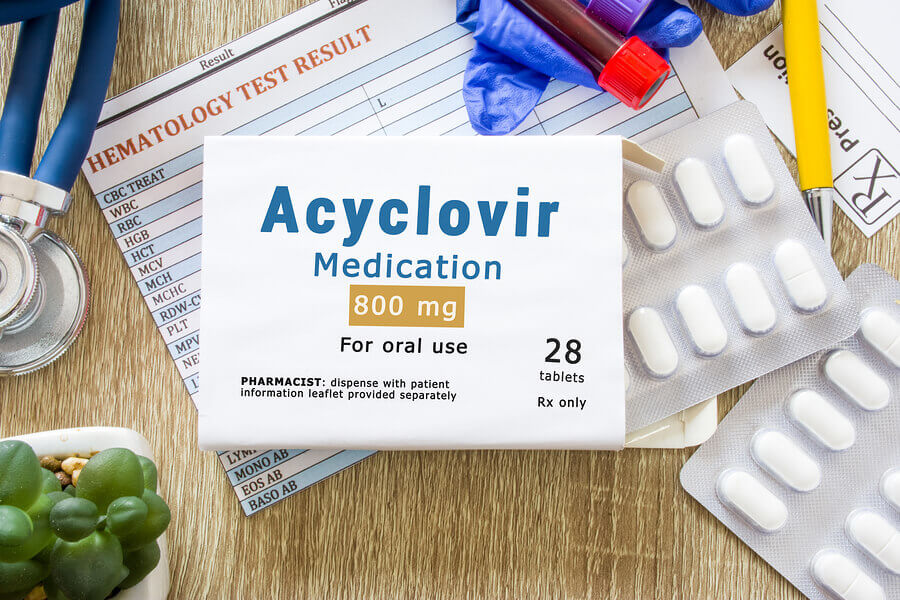 Prices of acyclovir declined to a national average of 69 cents in October 2022. However, prices at eDrugstore.com are competitive and include added services such as free telehealth consultations and free shipping.

The prices for acyclovir, a powerful antiviral medication, have held steady at CVS and Walgreens for months. CVS has remained at 72 cents, and Walgreens has kept its price at 98 cents. These prices have held through October 2022. Walmart, however, has dropped to 45 cents,a decline of 23 cents from last month.

Shingles, which occurs most often in adults who are 50 or over, is caused by herpes zoster, which is the name attached to an adult-onset reactivation of the varicella-zoster virus that causes chickenpox in childhood.

No virus in the herpes family has a cure, which means that once you contract one of these viruses, it will remain in your body for life. The viruses alternate between active and dormant phases. During an active phase, they take up residence in nerve cells.

Also called aciclovir, acyclovir was hailed as a major step forward for antivirals when it was discovered in the 1970s within the cells of a sea sponge in the Caribbean. Before acyclovir, anti-viral treatments were extremely dangerous; they could destroy cells indiscriminately and killed any microorganism they found, hostile or benign.

Acyclovir was first made available in 1981. Since then, it has become one of the world’s essential medicines, with over 3 million prescriptions in the U.S. alone. In addition to shingles, cold sores, and genital herpes, acyclovir is used to treat herpes simplex encephalitis and herpes or shingles in the eyes.

Acyclovir can also be used to treat or prevent herpes transmission between mother and newborn as well as other viral infections during pregnancy that might threaten both mother and child.

Acyclovir is usually taken as a pill, although it’s also available in intravenous form. Cream preparations are also available, for outbreaks on the skin.

Acyclovir works by sharply restricting the ability of viral cells to multiply, which typically happens during an active phase of the virus. Limiting this replication reduces the severity of outbreaks as well as how many you’ll experience.

Another common medication, valacyclovir, is a prodrug that turns into acyclovir as the body breaks down the drug.

In most cases, the most common side effects of acyclovir, affecting 1% to 10% of people who take it, include:

If you need to take intravenous acyclovir, go over your medical history closely and discuss the possibility of extremely rare side effects with your doctor.

Acyclovir is classified as a Class B drug for pregnancy, which means animal studies have shown no signs of birth defects but that there have been no studies in humans. Therefore pregnant people, or people who might become pregnant, can take acyclovir, and it’s recommended by the CDC to treat varicella in people who are pregnant.

If you’re breast-feeding, you may need to discontinue as acyclovir is expressed in breast milk.

Acyclovir Contraindications (Who Should Not Take Acycloir)

Some people are resistant to acyclovir. If you’re taking immunosuppressants as part of an organ transplant procedure or if you have HIV or AIDS, speak with your doctor before you take acyclovir or related medications. Acyclovir is often included to prevent opportunistic outbreaks by herpes viruses for immunocompromised people, but it may interact with HIV/AIDS treatments, such as interferon, and antiretrovirals, such as zidovudine.

If you have liver or kidney concerns, be careful when taking acyclovir. With the liver, there’s concern that the liver may not fully break it down, while in the kidneys, especially in high concentrations, acyclovir can precipitate into crystals that then need to pass from the body. If you’re experiencing discomfort while urinating or other signs of kidney problems, see a doctor immediately.

If you’re taking probenecid to treat gout or hyperuricemia (elevated levels of uric acid in the blood), don’t take acyclovir unless your doctor clears it. Probenecid can increase how long acyclovir lingers in the body and in turn, it limits how effective probenecid is at clearing uric acid from the body. This effect is most pronounced if they’re taken together, so if you need to take both, stagger the times according to medical advice.

We add a host of value-added services into our prices, making eDrugstore an even more attractive source for antiviral medication. By ordering your acyclovir from eDrugstore, you’ll avoid the bothersome travel to and from the local drugstore and will also save any time that you might have to spend waiting for the prescription to be filled.

If you don’t yet have a doctor’s prescription for acyclovir and are finding it difficult to fit a provider appointment into your busy schedule, we have a handy solution for you. We offer complimentary online consultations with licensed U.S. physicians who can authorize a prescription if appropriate.

If you do decide to place an order, we will fill it promptly, package it discreetly, and ship it free of charge to the destination of your choice. If this is your initial order, a complimentary pill-splitter will be enclosed.

If the convenience and services offered by eDrugstore sound appealing to you, pay a visit to our sexual health page to learn more.