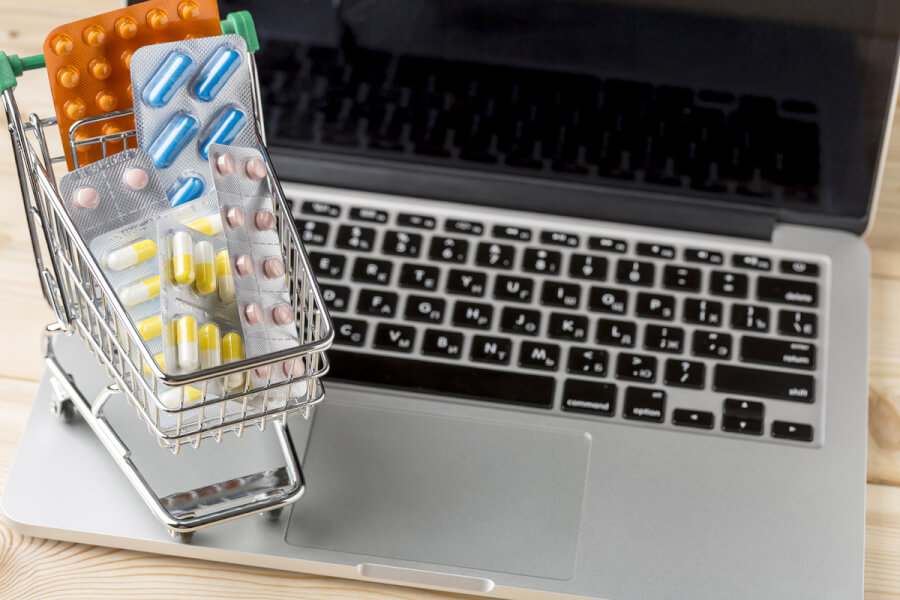 Viagra and the other erectile dysfunction drugs like it are a perfect fit with the increasingly popular notion of direct-to-consumer medicine in an online setting. But, despite some claims to the contrary, this form of e-commerce has been around for some time.

To some it might seem that “direct-to-consumer medicine” is a bold new concept that has somehow emerged fully formed in just the past year or so.

At least, that’s the conclusion one might draw from reading Vishal Ketpal’s recent article posted at NPR.org, in which he describes the concept as “a new e-commerce market.”

In fact, it might be more accurate to characterize it as an idea that has finally come of age. (We’ll talk more about eDrugstore.com, one of the pioneers in this form of marketing, at the end of the article). And clear signs of its emergence as a force to be reckoned with are the ubiquitous advertisements — both print and broadcast — from such relative newcomers to the market as Hims, Roman, Keeps, SmileDirectClub, Hubble, Nurx, Cove, and Zero.

For those not yet familiar with those enterprises, Hims and Roman deal in multiple male-oriented lifestyle products but showcase erectile dysfunction medications as their premier stock in trade. Keeps specializes in hair-loss treatments, while SmileDirectClub focuses on orthodontics. Hubble, Nurx, Cove, and Zero specialize in vision care, oral contraception, migraines, and smoking cessation, respectively.

Perhaps the biggest splash has been made by Hims and Roman, both of which sell, as previously noted, a relatively narrow selection of both brand-name and generic erectile dysfunction drugs.

The increased market activity in this particular medical market sector makes clear that Viagra and its generic equivalent, as well as other popular ED drugs, are ideally suited to this direct-to-consumer approach.

Here are some of the reasons that Viagra and other ED medications are ideal candidates for direct-to-consumer medicine on the internet.

Most Men Loath to Discuss ED

Although ED is a widespread problem among men, it’s a topic that most men are reluctant to talk about with anyone, including their doctors, at least face to face.

Actually, men are far less likely to seek medical attention for any health problem than their female counterparts. Males tend to suffer in silence until a health issue simply can no longer be ignored. And then, they do reach out to a doctor or other medical professional, but only with great reluctance.

For this reason, the ability to link men via telemedicine technologies with physicians is attractive to men who would prefer not to discuss problems of sexual function with their regular doctors. And direct-to-consumer medicine offers this alternative.

Viagra and all other ED drugs are available only by prescription, and these online marketers expedite that process by linking patient to doctor via some form of telemedicine communication. The doctor considers the patient’s symptoms and medical history before deciding whether it’s appropriate to prescribe Viagra or another ED drug for him.

As previously noted, ED is a very common problem, one that faces an estimated 30 million American men. And although its causes may vary, the problem itself is fairly easily identified. It’s an inability to achieve and maintain an erection suitable for intercourse. You know if you’ve got it, although you might not know the origin of the problem, which is a reason to get checked out overall by your doctor on a regular basis.

By far, the most common cause of ED is insufficient blood flow to the penis, said to account for roughly 80 percent of all ED diagnoses. And it is this common cause of ED that Viagra was developed to treat. Viagra and the other ED drugs won’t cure your ED, but they will temporarily optimize blood flow so that you have a window of time during which you can get and keep an erection and enjoy sexual activity. Online direct-to-consumer medicine is not a new concept but one that has finally come of age.

It’s been more than two decades since Viagra made its debut and revolutionized the treatment of vascular-related ED. Over the years, Pfizer’s iconic little blue pill and the other ED drugs that have followed in its wake have been subjected to stringent clinical testing and other medical studies to confirm their efficacy and safety.

In other words, these medications are a known quantity. Their pros and cons are well understood by medical professionals who can readily identify men who are appropriate candidates for the drug. By the same token, doctors can also quickly detect prospective users whose underlying health issues make the use of Viagra inadvisable. This includes men who take medications, such as nitrate-based drugs, that interact adversely with the ED drugs.

Side Effects Are Generally Mild

While the side effects associated with various ED medications may vary from one drug to another, they are generally mild and may disappear altogether after the drug’s been taken for a while. The most common side effects of these drugs are back and muscle pain, dizziness, facial flushing, headache, runny or stuffy nose, and upset stomach.

Although rare, these medicines can also trigger some side effects that demand immediate medical attention. These include a partial or total loss of hearing and/or vision and erections that last for four hours or more.

With much of today’s human discourse and commerce handled on the internet these days, it seems only fitting that certain straightforward medical issues be handled online as well. As previously noted, several of the newcomers to the realm of medical e-commerce deal not only in ED medications but other lifestyle drugs and products as well.

Nearly two decades before the debuts of Hims and Roman, Secure Medical’s eDrugstore.com made it easier for reluctant male patients with erection problems to get those products safely and securely. The website, which operates out of Tempe, Arizona, provides a virtual forum where men in need of ED help can connect — free of charge — with licensed U.S. doctors and discuss their symptoms and overall health in general.

If a physician determines that treatment with an ED drug is appropriate, eDrugstore makes it possible for individual patients to place orders for medications that are then dispensed by licensed U.S. pharmacies.

Unlike Hims and Roman, which operate on a subscription basis, eDrugstore offers consumers a pay-as-you-go business model. Each individual order stands on its own and does not initiate a program of monthly shipments that continue until the consumer cancels the subscription.

However, like Hims and Roman, eDrugstore makes it easy for the consumer to do one-stop shopping, linking together consumer, physician, and pharmacy all through a single website. To learn more about all the services available from eDrugstore, visit its Erectile Dysfunction page.