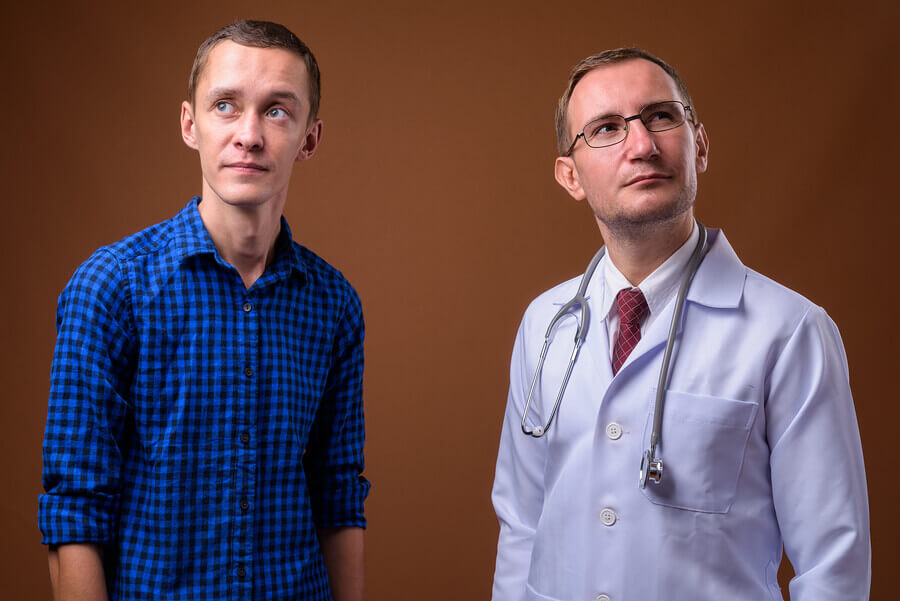 Telemedicine and online prescription drug services help to overcome some of the barriers to timely treatment for erectile dysfunction. These barriers fall into three primary categories: emotional, logistical, and financial.

What is it about men and doctors? Unless they fear they’re facing imminent physical collapse, many men find countless reasons to avoid visits to the doctor’s office. Could it be some deep-seated angst over the fact that it was a doctor who first whacked their butts into consciousness at birth?

And it can become nearly impossible to convince some men to consult a doctor when the problem they’re facing is of an especially intimate nature. As in erectile dysfunction. It’s a topic that most males feel uncomfortable discussing face to face.

Male reluctance to visit a doctor seems to fall into three major categories: emotional, logistical, and financial. First, the emotional barrier is perhaps the hardest to overcome, probably because it’s the most difficult one to pin down. It’s likely that, when pressed for an answer, most men couldn’t really sum up in a few paragraphs their reasons for avoiding the doctor. They just know they’d rather not go.

Secondly, the logistics of setting up a visit to the doctor’s office can also be challenging. If you work a 9-to-5 job, you will have to take some time off from work to see the doctor unless, of course, you’re fortunate enough to have a doctor with evening or weekend hours.

And lastly, finances are always a primary consideration. For men who have health insurance, the co-pay for a doctor’s visit is usually not that high and thus no great barrier. However, in the case of ED, most health insurance plans don’t cover the medications most often prescribed to treat the disorder. And these drugs can be expensive, although the advent of generic alternatives in recent years has brought their costs lower.

Fortunately, there are ways to get help today without having to sit down face to face with a doctor to admit that one’s sexual equipment just isn’t working the way it should. Telemedicine and online prescription drug services, or the two in combination, offer a less nerve-wracking option to get counseling for the problem and be prescribed medications that can ease its symptoms.

By their very nature, telemedicine and online prescription drug suppliers easily overcome most of the emotional and logistical hurdles to getting help for ED. And, as you’ll see, some online options eliminate the cost of a doctor’s visit, leaving only the cost of the medication to deal with.

If there were ever any real doubt about male reluctance to see the doctor, a recent Cleveland Clinic survey should help to banish it. The world-renowned Ohio medical center surveyed 1,174 adult men about their attitudes toward doctors and doctor’s visits. A whopping 72 percent of the survey’s respondents said they would rather clean the bathroom or do other household chores than visit the doctor, according to a report at AARP.org. Sixty-five percent of respondents said they postpone a visit to the doctor as long as possible.

The survey found that many men simply don’t like talking about their health with anyone, including a doctor. One in five admitted that they’ve failed to be completely honest with doctors, citing discomfort about discussing certain issues. Many also said they dreaded being told that they might have to change their diets or lifestyle.

Among older men, the survey found a definite reluctance to broach topics such as ED and urinary problems. This can be particularly perilous to their health because of the close association between erectile function and cardiovascular health. And both urinary problems and ED can result from prostate health issues, which usually can be successfully treated if diagnosed early enough.

There’s a Name for It

When reluctance to see a doctor crosses the line into a pathological fear of doctors, you’re dealing with a very real mental disorder, which is called iatrophobia, according to an article at VeryWellMind.com.

Most folks, whether men or women, don’t really enjoy going to the doctor these days. However, iatrophobics vehemently resist medical treatment of any kind, which can make treatment of the disorder next to impossible.

Telemedicine to the Rescue

Remote interaction with medical professionals isn’t really new, but it is far more sophisticated and technologically advanced than it once was. A telephone call to the doctor is perhaps the simplest form of telemedicine there is.

Today’s advanced telecommunications and telemetry technologies make telemedicine a satisfactory substitute for face-to-face doctor-and-patient interaction in all but a few medical specialties. At the very least, it is a way to establish an initial line of communication between patient and doctor that can continue to operate in the virtual realm or develop in time to a mix between in-person and virtual interaction.

Telemedicine is an obvious solution to the challenge of bringing medical care to those located far from urban medical centers. It is also an easier way for those who are reticent about their medical problems to broach the subject with someone who is equipped to help.

And unlike most doctor’s offices, which operate on a fairly inflexible 9-to-5 schedule, telemedicine allows patients to get medical attention when they need it, no matter the time of day or night.

Telemedicine consults are generally less expensive than a visit to the doctor’s office, which makes this form of health care available to an ever-larger audience than regular medical care.

Based in Tempe, Arizona, eDrugstore.com is a longtime online prescription drug service that also offers its customers easy online consultation with licensed U.S. physicians. It stocks a full range of male impotence drugs, including both brand-name and generic products, as well as a limited selection of other lifestyle drugs and products.

If you’re worried about a persistent inability to get and keep an erection suitable for intercourse, eDrugstore’s consultation service can put you into online contact with a licensed medical professional free of charge. If the doctor determines that you are indeed suffering from ED and are an appropriate candidate for Viagra or another ED medication, a prescription will be authorized.

If you should place an order with eDrugstore, it will be expeditiously filled, discreetly packaged, and shipped free of charge to the destination of your choice. If this is your first order, a complimentary pill-splitter will be enclosed. If you’d like to learn more, pay a visit to eDrugstore’s Erectile Dysfunction page.