Older couples who regularly engage in sexual activity appear to have a more positive outlook on life than those who are rarely, if ever, intimate. These findings were based on a study that analyzed data from more than 700 couples over the age of 65.

A healthy sex life is the key to happiness for many older couples, giving them a more positive outlook with which to face the many challenges — both physical and psychological — of advancing age.

Recent evidence of sex’s curative properties among the elderly comes from a study published in a 2014 issue of The Journals of Gerontology, Series B. Adena Galinsky, lead author of the study, said the study’s findings show that sexual intimacy helps to keep both partners in the marriage positive even in the face of difficult times. The lack of sexual intimacy, however, tends to make matters worse during tough times.

Galinsky and her colleague, Linda J. Waite, based the study’s findings on their analysis of data from 732 couples who had been interviewed on a wide array of subjects for the 2010-11 wave of the National Social Life Health and Aging Project. Most of the 1,464 individuals interviewed were between the ages of 65 and 74, according to Galinsky. The vast majority of those interviewed were married, but roughly 50 individuals were simply living together.

Interviewed by Reuters Health, Amelia Karraker, a postdoctoral fellow at the Population Studies Center at the University of Michigan in Ann Arbor, said the study sheds further light on the relationship between poor health and poor marriage quality. Although she was not involved in the study itself, Karraker said its findings confirm that the concept of well-being among the elderly “incorporates both psychological and physical well-being, as well as sexual well-being, which can occur at the intersection of those two.”

Couples interviewed for the study reported an average of one partnered sexual activity per month. The study’s authors note that marriage quality appeared to increase in direct proportion to the increase in sexual frequency.

Sexual activity, as defined by the study’s authors, is not confined to vaginal intercourse but can take a variety of forms. Karraker commended the authors for highlighting this aspect of sexual intimacy and showing that “people can expand their idea of what sex is.”

The findings of this most recent study largely confirm what earlier studies and surveys have shown. At the 64th annual scientific meeting of the Gerontological Society of America in November 2011, Adrienne Jackson, an assistant professor at Florida A&M University, presented evidence of the close relationship between sexual activity and marital happiness. Viagra and other drugs in the same family can help overcome erection dysfunction for many men.

Among her study group, Jackson found that the frequency of sexual activity was a significant predictor of both marital and general happiness. This correlation held true even after taking into account such factors as age, gender, health, and satisfaction with financial standing.

Jackson’s analysis showed that 40 percent of all respondents who reported no sexual activity during the previous 12 months described themselves as very happy with life in general. That percentage jumped to nearly 60 percent among those who engaged in sexual activity at least once a month.

Although not directly addressed in either of these studies, physical health and condition are obviously important considerations in any discussion of sexual activity among the elderly. The aging process brings changes that have a direct bearing on the ability of both men and women to have and enjoy sex, according to MedicineNet.com.

Among women, changes in the vagina occur with advancing age. The vagina may shorten and narrow, and its walls can become thinner and less flexible. Women may also experience a significant decrease in natural vaginal lubrication, the absence of which can make vaginal intercourse painful. Fortunately, your doctor may be able to prescribe medications that can overcome some of these physical obstacles and allow you to enjoy sex once again.

For men, the most widespread obstacle to sexual activity is erectile dysfunction, also known as impotence. The cause of this problem can be physiological or psychological in origin. Generally speaking, the primary physiological barrier can be traced to a lack of strong blood flow to the penis. In fact, there is a close relationship between erectile dysfunction and heart disease, because both disorders arise because of compromised blood flow to the penis or heart. 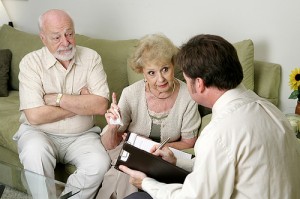 Older couples who encounter physical obstacles to a healthy sex life should consult their doctor to see what steps can be taken to remove such barriers.

If erectile dysfunction is keeping you from enjoying a healthy sex life, take heart, because modern medicine has developed some powerful medications that can help you to overcome this problem. As with all prescription medications, consult with your doctor before taking any of these drugs.

First introduced in 1998, Viagra was the first in a series of drugs known as PDE5 inhibitors, so called because they block the effects of an enzyme known as phosphodiesterase type 5. Without getting into the physiological details of the drug’s mechanism, its primary effect is to relax the smooth muscle tissue lining the arteries that supply the penis, promoting strong blood flow. In addition to Viagra (sildenafil citrate), PDE5-inhibiting drugs include Cialis (tadalafil), Levitra and Staxyn (vardenafil), and Stendra (avanafil). All of these drugs are available through eDrugstore.com.

None of the aforementioned ED drugs represents a cure for erection dysfunction. Rather, they temporarily promote strong blood flow to the penis, which makes it possible to achieve and maintain an erection when conditions are right.

ED Drugs Not for Everyone

If your erection dysfunction is psychological in origin, Viagra and the other ED drugs probably won’t help you significantly. Furthermore, these drugs are not recommended for those suffering from certain underlying health problems such as severe heart disease, low blood pressure, or uncontrolled high blood pressure, heart failure, recent history of stroke, uncontrolled diabetes, or retinitis pigmentosa.  If you have diabetes or have been treated for prostate cancer, these drugs may be less effective.

If you’re taking nitrate drugs for the treatment of angina or alpha-blockers to treat benign prostatic hyperplasia or hypertension, you should definitely avoid PDE5-inhibiting medications, which can adversely interact with those drugs. Taking nitrate-based drugs and one of the PDE5 inhibitors together can result in a precipitous decline in blood pressure, which could be life-threatening.

If the convenience of ordering your ED drugs online appeals to you, be sure to check out the many services — and a few complimentary extras — available from eDrugstore. Based in Tempe, Arizona, eDrugstore has been in business since the late 1990s and sells only FDA-approved medications that are dispensed exclusively by licensed U.S. pharmacists. To learn more, visit eDrugstore’s Erectile Dysfunction page.