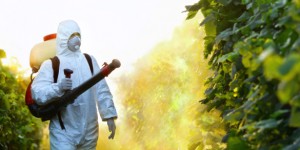 Residual levels of pesticide found on certain fruits and vegetables have been associated with lower quality sperm in men who routinely eat these types of produce.

Researchers at Harvard T.H. Chan School of Public Health have found that men who eat fruits and vegetables with higher levels of pesticide residue may risk damage to the quality and quantity of their sperm.

Jorge Chavarro, senior author of the study and assistant professor of nutrition and epidemiology, said, ¨To our knowledge, this is the first report to link consumption of pesticide residues in fruits and vegetables . . . to an adverse reproductive health outcome in humans.¨

Findings from Prior Studies

Numerous studies have demonstrated that the consumption of conventionally grown fruits and vegetables produces measurable pesticide levels in urine, while still other studies found lower semen quality among men with high occupational and environmental exposure to pesticides. And a few studies have even explored the health effects of consuming pesticide residues, but none has tackled the male reproductive implications of such pesticide exposure.

Chan School researchers used data from 155 men enrolled in the Environment and Reproductive Health (EARTH) study at a fertility center in Boston. These men were the male partners from a like number of subfertile couples in the EARTH study group. The ongoing EARTH study is funded by the National Institute of Environmental Health Sciences. For the Chan School study, data included 338 semen samples collected between 2005 and 2012, as well as validated survey information about the diets of these men.

Researchers used data from the U.S. Department of Agriculture’s Pesticide Data Program to divide fruits and vegetables into two separate categories, based on whether they contained high levels of pesticide residue or low-to-moderate pesticide residue. They also adjusted their data from study participants to take into consideration other factors known to affect sperm quality, such as smoking and body mass index. 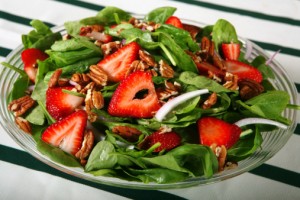 Spinach and strawberries, the primary ingredients in this salad, both have been found to have relatively high levels of pesticide residue.

According to PDP data, fruits and vegetables with a high level of pesticide residue include apples, peppers, pears, spinach, and strawberries. Those in the low-to-moderate residue category are beans, grapefruit, onions, and peas.

Following dietary assessment, semen samples were collected from the 155 study participants over an 18-month period. These samples were evaluated for concentration and motility using computer-aided semen analysis, or CASA. While results showed no relationship between total fruit and vegetable consumption and semen quality parameters, degraded semen quality was clearly associated with the intake of produce with high levels of pesticide residue.

In Line with Danish Studies

While the Chan School study is the first to look at the relationship of intake of produce with high pesticide residue to sperm quality, its findings seem to be in line with a 1999 Danish study of 256 farmers. That study found that farmers eating conventionally cultivated fruits and vegetables had a significantly lower proportion of normal sperm than farmers whose diets consisted of 50 percent or more of organic produce. Organic produce is cultivated without the use of chemical or synthetic pesticides.

While most processed foods made with conventionally raised fruits and vegetables have lower levels of pesticide residue than the fresh fruits and vegetables themselves, there are some notable exceptions, based on data from USDA’s PDP program. In a comparison of fresh apples with processed apple products, USDA found that the fresh apples they studied had significantly higher pesticide residues, while the processed apple juice and applesauce they tested had much lower levels of residue, if any. 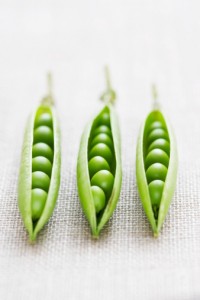 Pesticide residues have been found to be low to moderate in peas, as well as beans, grapefruit, and onions.

In the conclusion to their study, published in a 2015 issue of ¨Human Reproduction,¨ the Chan School researchers say that their findings ¨suggest that exposure to pesticides used in agricultural production through diet may be sufficient to affect spermatogenesis in humans.¨ However, they caution, ¨because our assessment of pesticide residues was based on data from the PDP, rather than on direct measurement of pesticides, further confirmation of these findings is warranted.¨

In an editorial that accompanied the Chan School study in ¨Human Reproduction,¨ Hagai Levine and Shanna H. Swan hailed the Chan School study, saying that ¨the paper makes a convincing case that dietary exposure to pesticides can adversely impact semen quality.¨ While acknowledging the study’s limitations, including its relatively small sample size and exposure assessment limitations, they say that it ¨carries important health implications.¨ Both Levine, a visiting scientist from Hebrew University-Hadassah, Israel, and Swan, a professor of preventive medicine, are currently associated with the Icahn School of Medicine at Mount Sinai, New York.