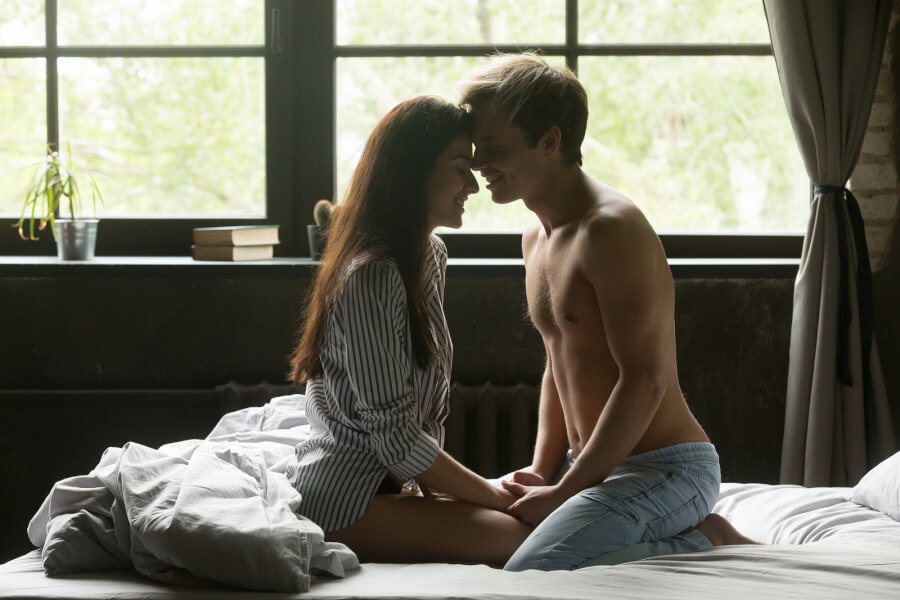 Putting on a condom without losing your erection in the process can be a daunting challenge. Practice, preferably on your own, a few times to ensure you’ve got the procedure down pat.

The lights are turned way down low. You and the object of your affection have shared a couple of glasses of wine. It seems that you both have the same thing in mind, and your body is showing very impressive signs of arousal.

In the interest of safe sex and to prevent an untimely and unintended pregnancy, you’ve decided to put on a condom. As you fumble to get the job done, your once-impressive erection falters and finally wilts away. Is this a sign that you’re losing your mojo and beginning to experience symptoms of impotence?

Putting on a Condom Is an Art

Probably not, but it is a sure sign that you need to learn a little bit more about the art of putting on a condom and to familiarize yourself with all that there is to know about the glove of love.

Apart from a few online videos in which heavy-breathing exhibitionists purport to demonstrate the proper way to put on a condom, there is not a vast body of resources that fledgling condom-users can use to bone up (pun fully intended) on the process.

And it’s not just teenagers getting ready for their first sexual experience who are in need of some instruction. Men in their 50s who have divorced after 25 years of marriage to a woman on the pill also can use some help if they have not been accustomed to using condoms in the past.

You Just Need Some Practice

As for the significance of losing your erection while fumbling through the process of putting on a condom, it is unlikely that this is a sign of impending impotence. An article posted at IrishExaminer.com cites a reassuring 2006 study conducted by Cynthia Graham, an associate research fellow at Indiana University’s Kinsey Institute for Research in Sex, Gender, and Reproduction. Graham’s study focused on 278 male subjects and their varying levels of confidence and skill in putting on condoms.

If you’re relatively new to the use of condoms, you should experiment with different brands to see if you can find the one that best suits you. To make this trial-and-error exercise a bit easier, several condom manufacturers offer multipacks that include condoms of varying styles. Try them all to see which is best for you.

For some men who are new to condom use, the old worries about the loss of sensitivity that comes with wearing a condom may be enough to wilt your erection. However, based on recent studies, such concerns don’t seem to be very valid in this day and age. A study published in the January 2013 issue of The Journal of Sexual Medicine concluded that condoms do nothing to diminish sexual pleasure, according to a report at CBSNews.com.

For this study, researchers at the Indiana University School of Public Health, home to the Kinsey Institute, submitted questionnaires to 1,600 sexually active men and women between the ages of 18 and 59. Those surveyed were asked to supply information about their most recent sexual event, including whether a condom and/or lubricant was used. They were also asked to identify which brands of condoms and/or lubricants were used.

Assuming you’ve been able to find a brand of condom that suits you, let’s move on to the finer points of putting the condom on. Actually, maybe it’s best to say a few words first about the best way to get the condom out of its wrapper.

Avoid the temptation to try to open the condom packet with your teeth, scissors, or pen knife. Should you accidentally damage the condom using a sharp object to get it out of the packet, putting on the condom essentially becomes an exercise in futility because it can no longer fully prevent a sexually transmitted infection or guard against an unintended pregnancy. Most condom packets have easy-tear edges that make it easy to get the condom out of its packaging.

Do not fully unroll the condom before trying to put it on. Rather, it should be rolled down over an erect or semi-erect penis. First, pinch the reservoir tip at the closed end of the condom to void that reservoir area of any air, and then roll the rest of the condom down the shaft of the penis all the way to your pubic hair or the base of your penis if you’ve opted for the shorn-genitals look.

Maybe It’s Inside Out

If the condom does not roll down the penis easily, you’ve probably got it inside out, in which case it’s probably wisest to throw the first condom away and start fresh with a new one. Hopefully, if you’ve done some practice beforehand, you won’t run into this snag when it really matters.

If your erection should fade away a bit during the time you’re putting on the condom, a little bit of kissing and cuddling should perk it back up until you’re ready for action.

While you’re going through the process of putting on the condom, avoid any genital-to-genital contact with your partner until your penis is fully covered. Otherwise, you may well defeat the purpose of using protection in the first place.

Once sex is finished, it’s important to realize that there is also a right way and a wrong way to deal with a condom after the fact. If you’re like most men, your penis will begin to get flaccid shortly after orgasm, a sure sign that it’s time to withdraw. To avoid any unwanted problems, grip the base of the condom tightly as you withdraw from your partner, taking care to ensure that the contents of the used condom stay in the condom until it — and its contents — can be safely disposed of.

If you’ve found this article informative and would like to see more of the same, follow our blog on a regular basis.