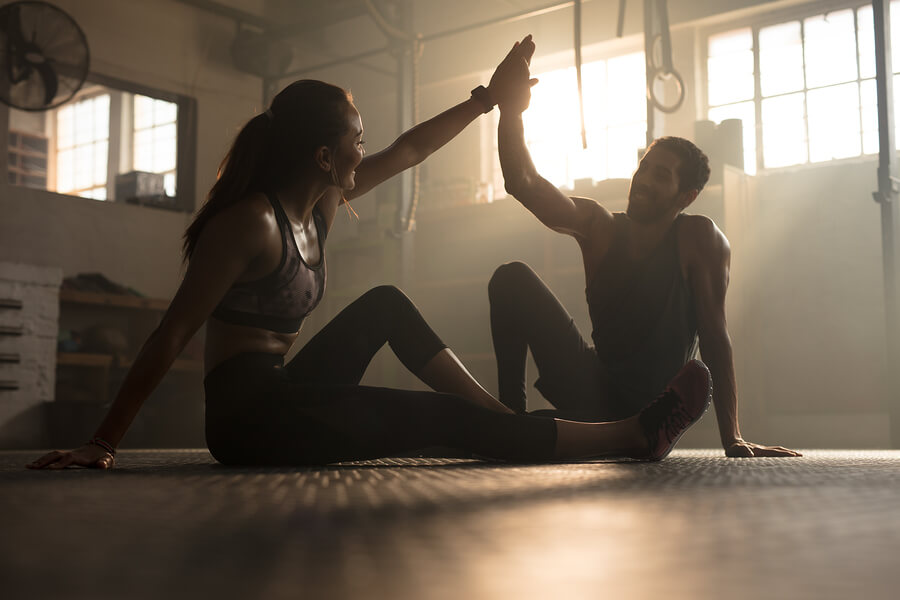 Heart health and erection health are linked. When you improve heart health through regular exercise, you often improve erection quality as well. And you don’t have to be a triathlete to enjoy the benefits. Doctors say that any level of exercise is better than not exercising.

Erectile dysfunction affects over 18 million adult men in the United States, for an overall incidence in the population of around 18%.

Erection problems are not rare, and if you experience them, you should not feel like you’re alone. Chances are good that you have family members or friends who go through the same thing, even if it’s not a topic of conversation. Erectile dysfunction is a complex physiological phenomenon that often has multiple physiological causes.

For a very long time, erection difficulties were thought to be psychological, and this caused a lot of unnecessary suffering and loss of confidence for a lot of men. Now that more is understood about the mechanics of erections, problems can often be treated in a straightforward manner with medications. And as a new study shows, lifestyle changes like increased physical activity can make a positive difference as well.

Recent Study on Exercise and Erections

The Cedars-Sinai Samuel Oschin Comprehensive Cancer Institute and Department of Surgery recently published the results of a study of 300 men, their physical activity levels, and their erection health. Senior investigator Adriana Vidal, PhD, had study participants self-report their activity levels, and had researchers classify them as “sedentary,” “mildly active,” “moderately active,” or “highly active.”

Why This Recent Study Is Noteworthy

This study was noteworthy for two reasons. For one, it quantified physical activity levels and put them in terms that ordinary people can understand. So if the average guy is wondering whether he gets enough physical exercise to help improve his erectile health, this study offers some guidance.

The second reason this study was noteworthy is that in previous studies of this type, African American men were underrepresented. Says Dr. Vidal, “Our results confirm previous work, however, no study has ever addressed how a minimal amount of exercise impacts both erectile and sexual function among black men, a population with increased prevalence of erectile dysfunction risk factors including obesity, diabetes, sedentary lifestyle and lower socioeconomic status.”

How Much Exercise Does It Take to Make a Difference?

This study classifies exercise intensity in terms of “metabolic equivalents,” abbreviated METS. Researchers found that the men who had a total of 18 or more METS per week reported higher sexual function scores, regardless of their racial background. METS reflect both time spent and intensity of exercise. Eighteen METS would be the equivalent of two hours of strenuous exercise, 3.5 hours of moderate exercise like running or swimming at moderate speeds, or six hours of light exercise.

The study also found that, whatever a man’s ethnicity, those who reported engaging in less physical activity also reported lower levels of sexual function. Furthermore, these men were at increased risk of diabetes, were typically older, and were more likely to be current or past smokers and have coronary disease. But the researchers agreed that any exercise, even if it is less intense, is better than not exercising at all.

Why Does Regular Exercise Improve Erections?

Regular exercise improves erections in many cases because for many men, erectile dysfunction is an early warning signal of heart disease. Raj Persad, UK urologist at Bristol Royal Infirmary, explains that the body has to have good blood supply for good erections, and that erections are a decent barometer of heart health. “That’s because the penile arteries are smaller than coronary ones, so become furred up faster,” Persad tells ioL Lifestyle.

Erections occur due to a complex system of blood vessels running through spongy tissue called the corpora cavernosa. When this happens, blood is “trapped” in the penis, causing an erection. When blood flow is insufficient due to clogged arteries, the result is erectile dysfunction. Exercise improves heart health, and consequently, erectile health.

Erection Problems Are Nothing to Be Embarrassed About

It has only been in the past 15 to 20 years that men have grown more comfortable raising the subject of erectile dysfunction, even with doctors and partners. The good news is, as medications like Viagra have been introduced (and subsequently become blockbuster drugs), the prevalence of erection problems has become more evident and doctors and researchers have learned more about the real causes of the problem. For most men, the problems are vascular and can be safely addressed with prescription medications like Viagra and Cialis.

Knowing that millions of other American men experience the same problem can help men understand that they have nothing to be embarrassed about if they experience erection problems, and that their doctors deal with such problems every day. There’s simply no reason to suffer in silence with all the great treatments available today.

If you experience erectile problems, speak to a doctor. He or she will not be shocked or scandalized, and you can be another step closer to dealing constructively with the problem. Be aware that most doctors will recommend more than just popping Viagra to treat erectile dysfunction. If you smoke, your doctor will likely name erection problems as one more reason to quit, because smoking further restricts blood flow. A balanced, healthy diet, losing excess weight, and getting sufficient physical activity are also important in getting the best possible relief from erection problems, whether or not you take prescription medications for it.

At eDrugstore.com, we have been providing men with prescription medications for treating erection problems for over 15 years. By providing brand name drugs like Viagra, Cialis, and Levitra at competitive prices, with the utmost discretion and convenience, eDrugstore.com gives men a terrific option for addressing erectile dysfunction discreetly and efficiently. We are also committed to outstanding customer service as well as the highest standards for online ordering security.