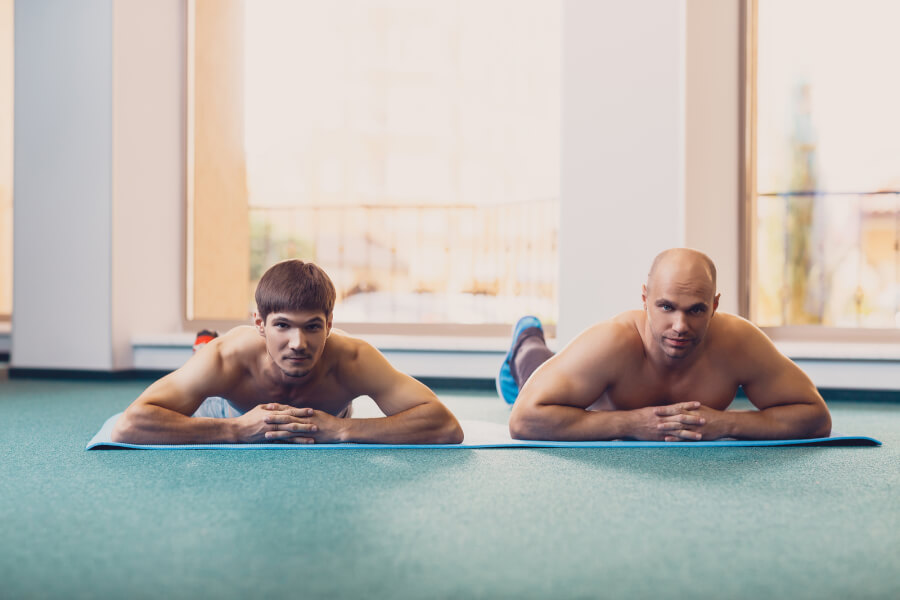 Preliminary findings from a recent clinical study suggest that pelvic floor exercises combined with weight resistance training can help both healthy men and those with erection problems to strengthen and improve erectile function. For at least some of those with impotence, strengthening the pelvic floor muscles may even allow them to resume normal sex lives without having to resort to medication.

Such exercises were originally developed primarily for women by gynecologist Arnold Kegel, M.D., who was then an assistant professor at the University of Southern California’s Keck School of Medicine. Kegel conceived the exercises as a way that women could strengthen their pelvic floor muscles to combat urinary and fecal incontinence. In the years since their introduction, these exercises have also been used to address the same sort of problems in men.

The muscles of the pelvic floor perform a number of functions in men, the most important of which is their support of the abdominal contents above them. They also maintain urinary and fecal continence, increase local blood supply, and are active during breathing and sexual intercourse.

Lead researchers on the study, conducted by the Erectile Dysfunction Foundation, were Paul Nelson, a clinical sexologist at the Mt. Sinai Men’s Health Center in New York, and Grace Dorey, a leading expert on pelvic floor physiotherapy.

Interestingly, Dorey was the lead author on an earlier study entitled ¨Pelvic Floor Exercises for Erectile Function,¨ which was published in a 2005 issue of BJU International. Of the more recent study, Dorey said, ¨This preliminary study proves that when men couple pelvic floor exercise with weighted resistance they experience improvement in sexual performance.¨

Improved Sexual Function for All

One of the more important results from this most recent study was the finding that pelvic floor exercise with weighted resistance actually improved sexual function in men who had no symptoms of impotence at all. Dorey’s earlier study had already produced strong evidence that pelvic floor exercises could help men with erection problems to overcome some of their symptoms of impotence.

For their test subjects in the most recent study, researchers gathered together a group of 30 men between the ages of 24 and 65. Participants included completely healthy men with no symptoms of erectile dysfunction, as well as men with mild erection problems, premature ejaculation, and more pronounced symptoms of sexual dysfunction.

Test subjects were required to follow to completion an exercise regimen known as the Private Gym for Men, the first FDA-registered exercise program designed specifically to strengthen the male pelvic muscles.

The beneficial effects of resistance training in strengthening skeletal muscles had already been well established and accepted. This study proved conclusively that weighted resistance training can increase pelvic muscle growth and enhance their strength.

Researchers offered the following specifics on areas of improvement that were realized by study participants:

Nelson noted that ¨women typically get all the sexual therapy and none of the drugs, while men receive all the drugs but almost none of the therapy.¨ Asked to assess the Private Gym’s Complete Training Program, he said, ¨This program combines solid medical intervention as well as heightens men’s sexual awareness and connection to their bodies.¨

The finding that study participants had increased confidence in their ability to please their sexual partner supports prior research showing that physical exercise has a positive effect on the human psyche that extends to sexual performance.

Although the study on which Nelson and Dorey worked covered men with and without symptoms of sexual dysfunction, many of its findings echoed conclusions from a large-scale French study that was published in the December 2014 issue of Physical Therapy.

For their study, French researchers gathered together 122 men who had been diagnosed with erection problems and 108 men suffering from premature ejaculation. The purpose of the study was to determine what effects, if any, a program of regular pelvic floor exercise would have on their symptoms of sexual dysfunction. None of the study participants suffered from neuromuscular diseases or had undergone previous perineal rehabilitation.

To test their theory, researchers subjected study participants to twenty 30-minute sessions of voluntary contraction of the ischiocavernosus muscle coupled with electrical stimulation, all designed to strengthen this key muscle in the pelvic floor.

For her earlier study, Dorey assembled a study group of 55 men who were 20 or older and who had suffered from erection problems for at least six months. In this randomized, controlled study, test subjects were divided into two groups. One group, known as the intervention group, was treated with pelvic floor muscle exercises (taught by a physiotherapist), along with biofeedback and lifestyle changes. The second group, known as the control group, was advised on lifestyle changes only.

At the conclusion of the three-month study, erectile function of men in the intervention group was significantly better than that of men in the control group. Researchers said their findings suggested that ¨pelvic floor exercises should be considered as a first-line approach for men seeking long-term resolution¨ of erection problems.