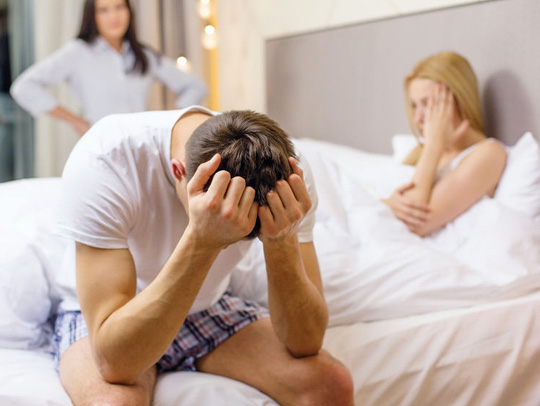 Why Do Men and Women Over 50 Cheat?

Dr. Helen Fisher is a biological anthropologist who studies human behavior. According to her research, humans have a natural tendency to find new sexual partners every few years. This phenomenon is known as the “four year itch.” In the past, children who lived to be age four were generally expected to survive. At that point, extended family could help raise the child. Our ancestors truly embraced the “it takes a village” mentality, which meant that the biological parents were free to look for new sexual partners.

This practice dates back thousands of years to when men were primarily hunters and women were primarily gatherers. Men and women may not have had much in common, but sex was always a priority. Without sex, the human race would not survive. Everyone realizes this on a biological level. Men and women are naturally driven to have frequent sex with a variety of partners. The human population has been growing exponentially, so it must be a successful strategy. Our ancestors had it right: sex is an essential part of human survival.

Dr. Fisher says that new sexual experiences can trigger a variety of hormones that enhance feelings of pleasure. We all know what it feels like to fall in love. There is an amazing rush of desire and euphoria, which makes us want more. These feelings lead to a natural desire to find the best partner for procreation. Now, what does all this have to do with having an affair?

Dr. Fisher believes that men and women are biologically driven to cheat. It makes sense when you think about it. Why else would men and women risk their families and careers for one night of fun? Men have an overwhelming desire to spread their genetic material to a variety of sexual partners. Women are driven to find the best possible mate with ideal genetics for procreation.

However, Dr. Fisher still believes that humans have free will. You may be naturally driven to cheat, but that doesn’t mean that you have to have an affair. Instead, you can focus on giving your current partner love and sexual energy. By channeling your natural urges, you can make these feelings work for you instead of against you. Esther Perel explains this technique in her book Mating in Captivity. Her research also appears in a book called The Best of Everything After 50 where Ms. Perel reveals the psychology behind this idea.

Men and women often cheat after suffering a recent loss. For example, it can happen after a family member dies or when the children leave home for college. Ms. Perel believes that a woman is more likely to have an affair when she believes that she has lost part of herself. She may subconsciously think that the affair will help her regain what was lost. For men and women, affairs can also be triggered by a midlife crisis.

In most cases, people who have affairs still love their partners. Yet, they cheat due to powerful biological and psychological triggers. Experts believe that no one is immune to the temptation of an affair. It could happen to almost anyone. So, how can you prevent infidelity? The simple answer is that you have to fight your biological urges.

An affair can threaten your family, career, and happiness. Unless you’re in an unhealthy relationship, you have to take steps to prevent destructive behavior that could harm the person you love. It’s not always easy, but it can be done.

If you’re over 50, you may feel bored with your current partner. Perhaps your partner’s habits and behaviors have become more annoying over time. You and your partner are busy, tired, and stressed, which makes it more difficult to make time for romance and sex. At times, you might not feel as passionate about your partner anymore. For all these reasons, you may be tempted to follow your natural urges and find someone new.

But here’s an idea: You could make your current partner into “someone new.” How would you go about doing that? That’s a great question. The following video will show you how to get your sex life back on track for good. No affair required.