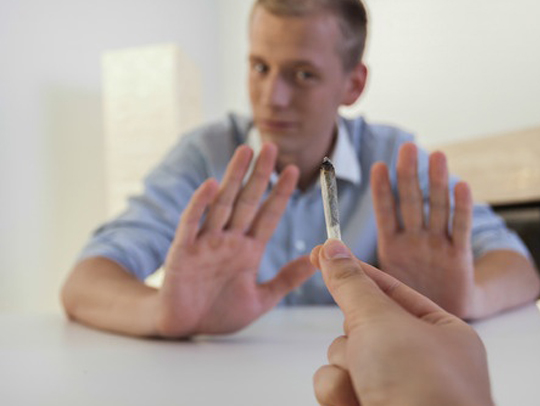 As marijuana becomes legalized in a handful of states and more people are experimenting with regular use of the drug, weed is losing its taboo status. But new research shows that men who smoke marijuana daily are three times more likely to suffer erectile dysfunction than their peers who avoid taking a toke. This is discouraging news to the thousands of American men who use marijuana to relax, or even prepare for sex.

Animal studies have shown that weed can inhibit erectile tissue in the penis. This is because tetrahydrocannabinol (THC), the active component in marijuana, can limit the penis’ smooth muscle capabilities, reducing normal sexual response and blood flow. In other words, pot can dull your penis’ natural responses to sexual stimulation. Experts say it makes sense that humans would experience the same side effects as our mammalian friends, and that human penile tissue is susceptible to the negative effects of cannabis. And even though many men say marijuana makes them feel like they have more sexual stamina, they may just be experiencing a delay in orgasm due to the drug’s effects.

While the mechanisms are unclear, previous research has shown that pot has several sexual side effects for men. Research in the Journal of Clinical Pharmacology has shown that cannabis lowers testosterone levels. And several fertility and sterility studies have shown that frequent marijuana use can lower sperm count and inhibit sperm’s mobility and motility. Those findings fly in the face of decades old lore (think “Reefer Madness”) that touts marijuana as a sexual enhancer, allowing users to feel more receptive to sexual experiences.

But researchers warn that marijuana’s effect on erections is not cut and dry. For one, much like alcohol, the dose makes the poison. If someone is smoking or consuming large quantities of a potent strain, they are more likely to experience erectile dysfunction than someone who is have one hit a day of a milder strain.

Different strains of cannabis could also have different effects on erections. Indica is a strain known for its relaxing properties, while sativa can be more stimulating. Researchers don’t know what effects each particular strains have on sexual performance and pleasure. They also don’t know how much placebo effect is responsible for some users saying that marijuana use helps their sexual function. Cannabis can also skew user’s concept of time, which means they may consider a sexual encounter lasting longer than it actually does.

If you feel like your pot habit may be interfering with your love life, it could be time to scale back. Many people presume that marijuana is a “safe” drug, posing little to no harm to the user. But researcher’s are just beginning to understand the drug’s effect on your sex life. And while lots of myths surround the use of marijuana as a sexual performance enhancing drug, the truth is pot could be making you less potent in the bedroom.