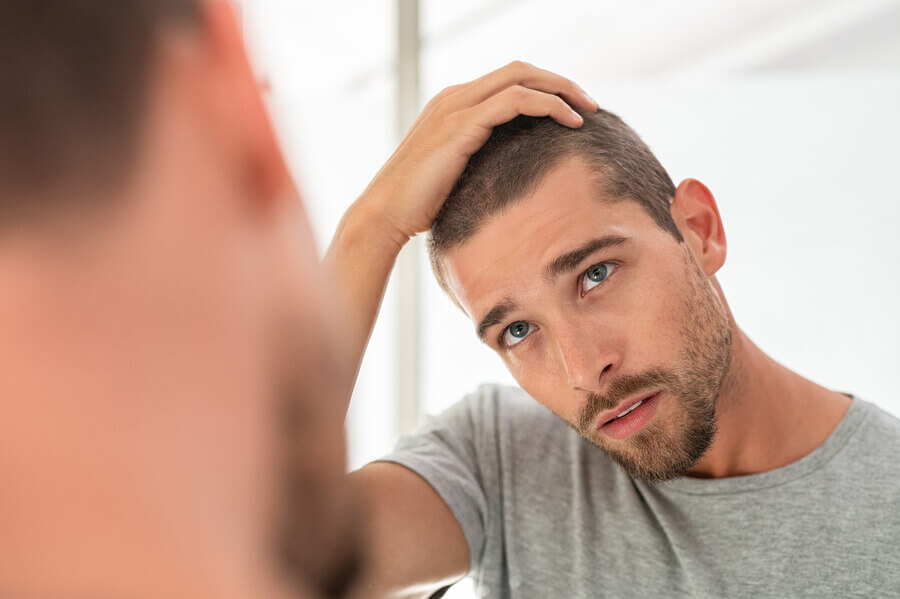 Few problems trigger the kind of anxiety that hair loss does. Men who notice their hair is thinning on top, or that their hairline is gradually creeping back often react with panic, resignation, and even flat-out denial. Adding fuel to this fire are common assumptions and misconceptions about hair loss, its causes, and how effectively it can be treated.

It isn’t surprising, then, that many men wait to act until after their hair is noticeably thinning and falling out. That’s a big mistake. The most effective treatment options we have for hair loss are drugs called dihydrotestosterone (DHT) blockers. DHT is the main cause of hair loss in men, and drugs that block it, like finasteride, have the greatest chance of success when taken as early as possible.

Whether you just noticed your hair is thinning or you’ve known for a while, this article will tell you everything you need to know about DHT and how DHT blockers like finasteride can be used to slow or even reverse hair loss.

What is DHT and Why Does It Hate My Hair?

You may have heard that balding is genetic, and there isn’t anything that can be done about it. But what does that word “genetic” even mean here? Well, it doesn’t mean your hair is genetically programmed to fall out at a certain time. Instead, it means your hair follicles have inherited sensitivity to dihydrotestosterone, or DHT.

DHT is a naturally occurring androgen, a type of hormone responsible for masculine physical characteristics. Normally, DHT causes increased hair growth, especially in the facial, underarm, and pubic areas. For men without genetic predisposition to balding, it also stimulates normal hair growth on the scalp.

But for men who are unlucky enough to have inherited DHT sensitivity, it’s quite a different story.

Unlike the other hair follicles on the rest of your body, DHT-sensitive scalp follicles respond to DHT by shortening their growth phase instead of lengthening it. Over time, the follicles gradually shrink in size and produce thinner and shorter hair shafts. Eventually, they aren’t able to generate new hairs to replace the old ones; they go dormant. Left unchecked, this process will continue until only hair on the sides and back of your head is left.

It’s interesting to note that the sensitivity to DHT in the scalp doesn’t extend to the hair follicles elsewhere in the body. That’s why a man who is losing the hair on his head can often still grow a pretty mean beard.

Stop It At the Source 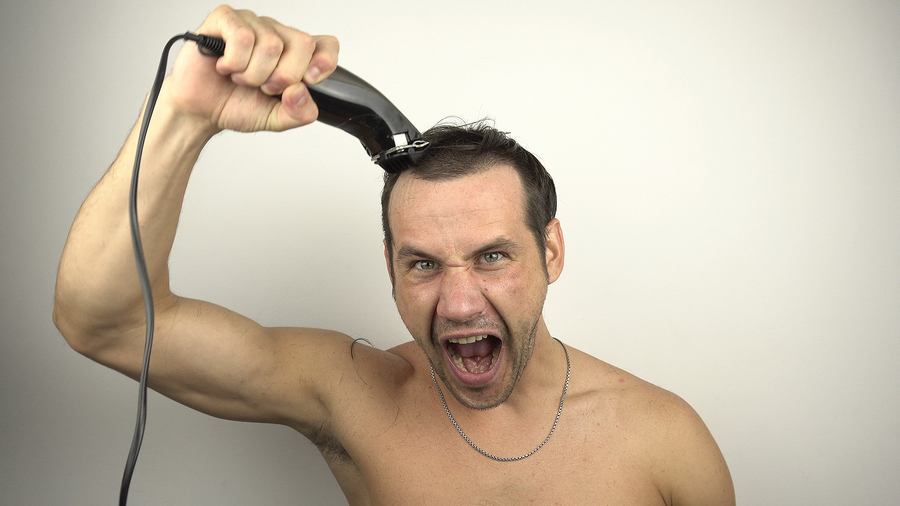 Now that we know the kind of follicular fallout that DHT can cause, your first question is probably, “How do I stop it?” You could ask it nicely to leave, but if that worked, we probably wouldn’t have had to write this article to begin with.

A better solution is to stop DHT from being made in the first place. The body makes DHT by converting testosterone into DHT with an enzyme called 5α-reductase (5 alpha-reductase, or 5AR).

Although we refer to them as DHT blockers, finasteride (Propecia, Proscar) and dutasteride (Avodart) are drugs that actually work by blocking the 5AR enzyme in the hair follicles and prostate and preventing it from making more DHT. They were originally developed to treat benign prostatic hyperplasia (BPH), a noncancerous enlargement of the prostate gland. BPH is caused in part by the growth effects of DHT on prostate cells. By blocking 5AR, these drugs decrease the amount of DHT in prostate cells so they don’t get too big.

When finasteride was in clinical trials for treating BPH, a significant number of patients reported increased hair growth as a side effect. This led to the discovery of finasteride as a potential treatment for hair loss. Additional research found that 1 mg finasteride reduces DHT in the scalp and bloodstream by roughly 70%—just as well as the 5 mg dose used for treating BPH but with significantly fewer side effects.

Dutasteride may actually work better than finasteride for hair regrowth in younger men, but its usefulness is limited by its tendency to cause more sexual side effects. That’s because while finasteride is specific for the type of 5AR found in the hair and prostate, while dutasteride blocks other types as well. 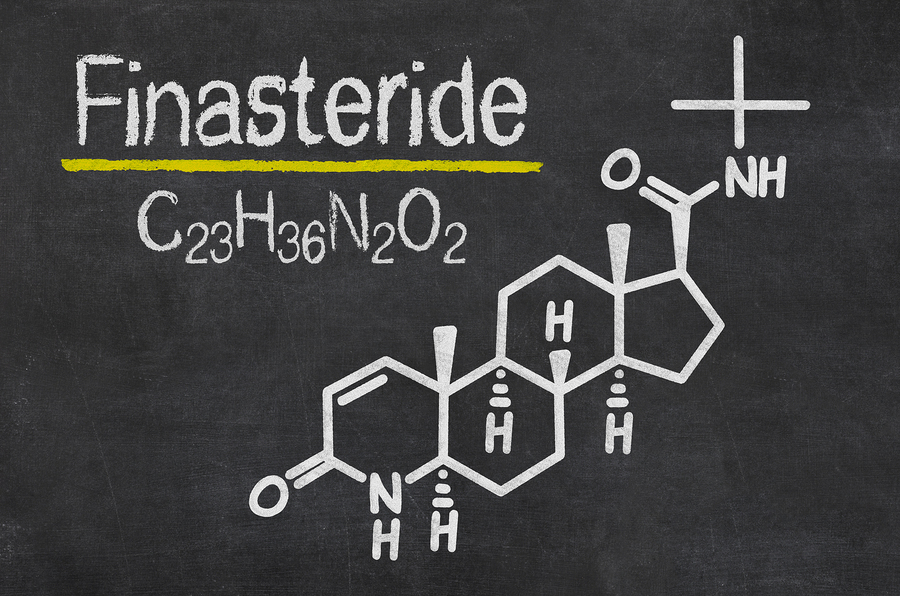 Finasteride is very effective at slowing hair loss in about 80% of men and at regrowing hair in more than 50% of men. In fact, it’s one of the two medications approved by the FDA for treating male pattern baldness, the other being topical minoxidil (Rogaine).

In one multinational study of 1200 men with male pattern hair loss, researchers randomly assigned patients to receive either finasteride 1 mg or placebo once daily for five years. At the end of the study, the average hair count in the finasteride group had increased by 10%, but it decreased by 26% in the patients on placebo. The finasteride group also showed a significant increase in the amount of time their hair spent in the growing phase versus placebo. More time growing translates to thicker, darker hair shafts and denser hair.

How Long Does It Take To Work? Are the Results Permanent?

Just like going bald is a gradual process, so is regrowing your hair. Some men will see their hair loss slowing down after about three months, and almost all men will have at least some results at six months. But it’ll take around a year of treatment with finasteride to experience the maximum effect. After that, the amount of hair regrowth will start to slow down, but the hair loss-slowing benefit will continue.

As long as you keep taking the drug, it’ll help you keep the hair you have. If you stop taking it though, your follicles will start to make more DHT, and you’ll lose all those sweet hair gains within a year. Fortunately, finasteride is an inexpensive drug that’s readily available from any reputable local or online pharmacy, and the costs are modest compared to the potential benefits.

What Medications or Supplements Block DHT?

There are a ton of products out there that claim to slow or reverse hair loss, but only two medications have serious scientific evidence that they actually do: finasteride and minoxidil.

We already know finasteride works by reducing the amount of DHT made in your scalp hair follicles. Remember, less DHT = more hair growth.

Minoxidil works by a different mechanism that scientists haven’t quite figured out yet. It doesn’t block DHT production, but it does increase blood supply to the hair follicles, which seems to encourage them to grow.

Finasteride is slightly more effective than minoxidil alone, so it’s often recommended as the first choice for treating hair loss. But using both together has been shown to have the greatest effect because each attacks hair loss from a different angle.

What Side Effects Can I Expect From DHT Blockers?

Anytime something changes your body’s ability to regulate hormones, it can result in some unintended effects. Thankfully, DHT blockers are fairly specific for blocking DHT in your hair follicles and prostate, so they don’t have any really nasty side effects. In fact, most men won’t experience side effects from using finasteride. However, some may experience mild sexual side effects like loss of libido, erectile dysfunction, and ejaculatory problems. These usually resolve quickly after discontinuing the drug. If you’re experiencing side effects like ED and don’t want to discontinue your treatment with finasteride, you can discuss the issue with your doctor to see if treatment with an ED drug like Viagra might be right for you.

Can Women Use DHT Blockers?

Pattern hair loss caused by DHT isn’t just a male problem. It can affect up to half of women at some point in their lives. A review of the scientific literature suggests that finasteride may have some benefit in treating pattern hair loss in postmenopausal women with normal hormone levels. However, research into whether it works for pre-menopausal women is hard to find, because finasteride can cause serious birth defects in male fetuses by blocking DHT that is needed for normal male sexual development.

The small amount of DHT blocker research available is for premenopausal women who have high androgen levels and the conditions that can cause, like acne and excessive hair growth. It shows that DHT blockers aren’t all that effective for female pattern hair loss.

Minoxidil does have some evidence that it’s effective for female hair loss, and since it’s applied to the skin, side effects are much less of a concern for women.

Time for Some Real Talk

If you’re noticing your hair is thinning and falling out, you should know that it isn’t going to get better if you pretend it isn’t happening. Once male pattern hair loss starts, it continues without mercy. That is, of course, unless you do something about it. eDrugstore.com is your ally in the fight against hair loss, and we have DHT blockers like Propecia and generic finasteride in stock and ready to ship to you. To learn more, visit our hair restoration page today.