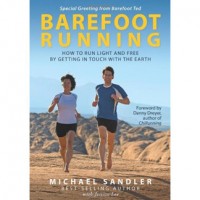 Michael Sandler who is a best-selling author and barefoot running coach, having taught thousands of athletes worldwide joined the show.

Michael Sandler is a best-selling author, and an internationally recognized barefoot running and walking coach, teaching thousands of runners, walkers, and hikers of all abilities. He has coached athletes professionally for nearly 20 years. After a near-death accident in 2006, he was told he was lucky to keep his leg and that he would never run again. With a titanium femur and hip, it was only through barefoot running and the lessons learned on the trails that he was able to heal and run again. With co-author Jessica Lee, they teach people how to rediscover the bliss of pain-free running. Together, they are cofounders of RunBare Company (www.RunBare.com), a barefoot running school based out of Boulder, Colorado.

In 2006, while training for a cross-country inline skating trip, Michael suffered a near-death accident, which left him with a shattered femur, hip, and arm along with a near inch leg-length discrepancy. Two months after the accident, he set the fastest record for the Bolder Boulder and Denver Half-Marathon by completing these popular races on crutches. He now runs barefoot 10 to 20 miles daily on rocky trails, hot asphalt, and even snow and ice, and sub-five minute miles barefoot all with his titanium femur and hip.

Among Michael’s personal athletic achievements are training for the 1992 and 1996 Olympics in both cycling and speed skating at the Olympic Training Center in Colorado Springs. While racing in Europe aiming for the Tour de France, an unexpected vehicle collision on a closed race-course dashed his chances for both international competitions.

Michael completed the California Ironman, and has a personal record for the 10K of 30:30 during the finishing leg of The Harvest Moon half-ironman. He went on to win a 2002 cycling state championship in Olympic sprints, beating the national team, and placed seventh in the master’s national championships. In 2005, he garnered a sponsorship from Rollerblade for ultra-endurance inline speedskating. In 2009 he paced Barefoot Ted—a well-known, colorful figure in ultra-running—for the last leg of the Leadville 100, in which Ted shattered his own personal record by over an hour.

In 2004, Michael rode his bike in an entirely different direction. He completed a monumental bicycle trip across the U.S. by riding 5,000 miles in 40 days, solo and unsupported to raise awareness for children and adults with attention deficit disorder (ADD). He ended the ride in Washington, D.C., where he was invited to speak before the U.S. House and Senate on the Mental Health Parity Act, urging equal health coverage for psychological as well as physical health.

National and international media have interviewed him, including NPR, BBC, and America in the Morning. Michael has been featured on CNN, the CBS Early Morning Show in Chicago and New York for his athletic efforts to raise awareness of ADD.

He is also author of the best-selling book College Confidence with ADD and founder of The Creative Learning Institute, a national center for coaching students with ADD and learning disabilities.