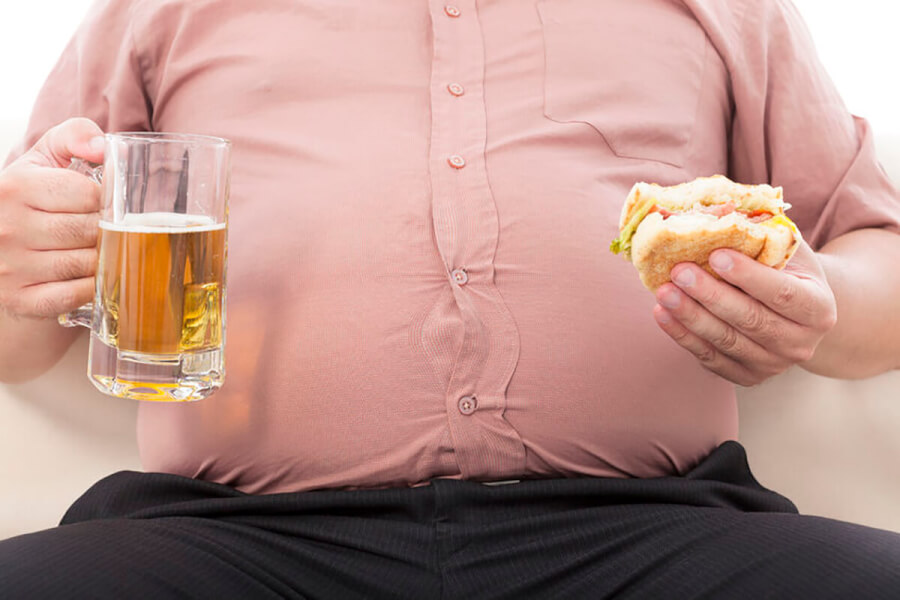 Why Belly Fat and Strong Erections are Arch Enemies

Belly fat, particularly visceral fat, is antithetical to healthy cardiac and erectile function. Fortunately, you can take steps to get rid of that spare tire.

Belly fat: it’s not good for your health or your self-image. Belly fat is exactly what it sounds like. It’s fat stored in and around the abdominal cavity. Some belly fat is located right under the skin (subcutaneous fat), and some fat is stored deeper inside, surrounding important organs like the liver, intestines, and pancreas. This second kind of belly fat, known as “visceral fat,” is more harmful to your health.

The reason visceral fat is dangerous is because it has been found to be metabolically active, affecting how a number of different hormones function. If your midsection has grown larger, it’s probably a result of both subcutaneous and visceral fat. The subcutaneous part is the fat you can pinch, and while it may not look great, it’s not necessarily harmful to your health. The visceral fat within your abdomen may not be “pinchable” but it does make your belly bigger than it would be otherwise, and it’s often surreptitiously causing health problems unless you take steps to decrease it. Numerous and far-ranging health risks are associated with excess visceral fat.

Type 2 diabetes isn’t the only health risk associated with visceral fat, however. Heart disease, breast cancer (in both men and women), colorectal cancer, and even Alzheimer’s disease are all correlated with higher levels of visceral fat.

Visceral fat generates substances that affect how your internal organs and metabolism work, according to Samuel Dagogo-Jack, MD, president of the American Diabetes Association. Among other things, it produces chemicals called cytokines that not only increase insulin resistance but also increase heart disease risk. Furthermore, cytokines cause inflammation, and this can lead to various types of cancers. In fact, visceral fat has been linked to cancers of the esophagus, pancreas, and colon. If you have too much visceral fat, working on reducing it is smart for your overall health, and, it turns out, for the health of your erections.

Your waist size could predict a number of health problems.

How Much Is Too Much?

Perhaps the simplest indicator of visceral fat is simply how big your belly is. An ordinary waistline measurement won’t give you an exact figure for how much visceral fat you carry (since most people also carry some subcutaneous fat on the midsection), but suffice it to say that if your waist measurement is over 40 inches for men (over 35 inches for women), you probably have too much visceral fat.

To get an idea of how much of your belly fat is visceral and how much is subcutaneous, you can measure around your waist once while standing up, and again while lying down. When you lie down, your subcutaneous fat falls to the side, making your belly smaller. Visceral fat, however, stays in place. So the more similar you’re lying down and standing up waist measurements are, the more elevated your likely levels of visceral fat.

When you have too much visceral fat, the substances secreted by it that increase insulin resistance actually have much further reaching effects. Ultimately, it can result in something called “metabolic syndrome,” which is associated with a number of problems with the body’s ability to consume and store energy efficiently. Coronary artery disease can be the eventual result, making it so the heart isn’t receiving blood and oxygen efficiently.

A study from 2014 published in Cardiovascular Imaging reported that adults with high levels of visceral fat had a statistically significant increase in risk of heart disease compared to counterparts without excess visceral fat, no matter what their body mass index (BMI) was. What that means is that two people could be the same height and weigh the same, but their heart disease risk profiles could be significantly different depending on how much of that fat is carried deep in the abdomen.

How Belly Fat Is Linked to ED

If all that wasn’t enough to get the average man to think about reducing abdominal fat, consider this: belly fat and erectile dysfunction go together too. All that visceral fat leads to coronary artery disease, which affects the quality of circulation throughout the body, including to the penis. What’s more, visceral fat produces an enzyme called aromatase, and aromatase converts testosterone to estrogen (but not back again). The result? Lower testosterone levels, which, while they don’t necessarily cause erectile dysfunction, certainly have other undesirable effects.

Many other systemic conditions also contribute to erectile dysfunction, including diabetes, high blood pressure, and kidney disease. And do you know what increases the risk of all these things? That’s right: excess visceral fat. What it comes down to is that in most men, erectile dysfunction is caused by impaired circulation to the penis, which can be caused by coronary artery disease, high blood pressure, diabetes, or kidney disease, and all of these conditions are affected by excess visceral fat.

How to Get Rid of Visceral Fat

What should you do if you want to reduce your levels of visceral fat? While there’s no shortcut, a healthier diet and more exercise are remarkably effective when done consistently and with commitment. A study recently published in the journal Circulation makes a case for cutting out sugar-sweetened drinks, like soda. While sugary drinks are only one part of the equation, cutting back on them or eliminating them altogether is one of the easiest ways to cut excess sugar and calories out of your diet. Considering that a single 12-ounce can of regular soda packs about 132 calories worth of sugar, it’s easy to see that cutting back on them can really add up in terms of reducing sugar and calories.

Any other activities you do that burn fat can burn visceral fat too. They’ll burn subcutaneous fat as well, but there’s really no way to get rid of one without the other. But the body tends to have a “last in, first out” policy with fat, which means that if excess visceral fat is a relatively recent addition, it could be among the first fat to go, so the results of your efforts could be quite motivating.

At the same time, there’s no real point in doing hundreds of ab crunches in an attempt to burn fat from your stomach. Yes, you’ll tone abdominal muscles, but to get rid of visceral fat, you have to burn more calories than you take in. That means aerobic exercise, interval training, and weight training, all of which burn calories. Bolster that with a healthier diet higher in complex carbohydrates, fruits, vegetables, and lean protein, and you have a winning combination, though your visceral fat won’t go away overnight.

What you eat can help to reduce levels of visceral fat as well.

Here’s another reason why the effort to lose visceral fat is worthwhile: if you do have to take medications like Viagra for erectile dysfunction, they’ll work better if they’re not up against clogged arteries, high blood pressure, and insulin resistance. In fact, there have been cases where erectile dysfunction can be reversed through long-term changes to dietary, exercise, smoking, and alcohol habits.

And let’s be honest here: losing excess visceral fat can make your clothes fit better, help you have more energy, and make you look better, and all these contribute to an improved self-image, which can help with performance anxiety and other problems in the bedroom. There is really no downside whatsoever to attempting to reduce visceral fat levels.

Belly fat is the bane of many middle-aged men’s (and women’s) existence. It tends to make people look older, and it causes a broad range of health problems, including big ones like heart disease and diabetes. It’s also indirectly a contributor to erectile dysfunction because it clogs arteries, including those that service the penis.

Getting rid of belly fat is smart for a lot of reasons, but if erection problems are what get you to take steps to make yourself healthier, there’s nothing wrong with that. eDrugstore.com has been providing brand name erectile dysfunction medications like Viagra for more than 15 years, and works with U.S.-licensed pharmacists and trusted shippers like FedEx to ensure a great customer experience every time. We invite you to browse our blog, for many more articles on erection problems, as well as how they affect and are affected by heart health.