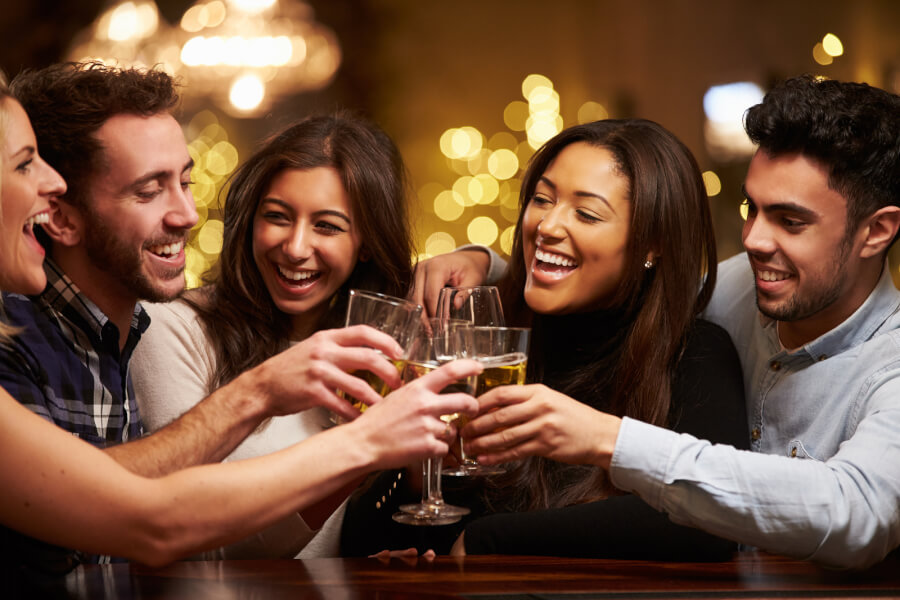 Men who consume more than two drinks per day on average put themselves at higher risk of erectile dysfunction (ED).

Most men have had enough real-life experience with alcohol to know that a drink or two may help to set the mood for romance but too much can spoil the party altogether.

All of which leaves unanswered the burning question: How much is too much? Unfortunately, there is no easy answer to that question. Your best bet is to drink only in moderation, particularly if you have romance on your mind. But, here again, one man’s moderation might constitute overdoing it for another man, especially one who drinks infrequently and has little tolerance for the effects of alcohol.

Moderation in alcohol consumption, as defined by the 2010 Dietary Guidelines for Americans, amounts to one drink or less per day for women and up to two drinks a day for men. (The Dietary Guidelines for Americans are issued once every five years by the U.S. Departments of Agriculture and Health and Human Services. As this article was being written, the 2015 edition of the guidelines had not yet been published).

While moderate alcohol consumption may be perfectly compatible with a healthy, fulfilling sex life, research has shown that sexual dysfunction is extremely common in men with alcohol dependence.

The researchers also described a vicious cycle that tends to exacerbate matters. Men who drink too much tend to develop some form of sexual dysfunction, which in turn leads to interpersonal conflicts. Mounting concern over these secondary problems often leads alcoholics to increase their alcohol consumption, only making matters worse.

As most folks know, alcohol is a central nervous depressant that somewhat ironically has initial effects that seem more like those of a stimulant. This probably stems from alcohol’s ability to lower inhibitions and calm fears, thus making those who are ordinarily somewhat withdrawn more likely to come out of their shell once they’ve had a drink or two. The depressant effect usually kicks in once the alcohol consumption goes beyond that “drink or two” threshold.

The two-edged sword that is alcoholic consumption was well recognized even in Shakespeare’s day. In the play Macbeth, the porter, clearly no stranger to alcohol, shares this bit of wisdom with Macduff: “Lechery, sir, it [alcoholic drink] provokes and unprovokes. It provokes the desire, but it takes away the performance.” A truism that a good many men today have experienced first-hand.

It takes about an hour for your liver to break down the alcohol in a standard-size drink. Thus, it will probably take about two hours to break down the alcohol in two drinks. If you find yourself drinking more than two drinks a day on a regular basis, your body may find it difficult to rid itself of alcohol’s toxins, which over time can adversely affect multiple organs, including those involved in sex, according to an article at EverydayHealth.com.

An occasional bout of overindulgence in alcohol may very well lead to difficulty in getting and keeping an erection in the immediate wake of tying one on. However, chronic heavy use of alcohol can lead to permanent impotence. Mehmet Oz, M.D., New York-based cardiothoracic surgeon and TV personality, explains that long-term overindulgence “will eventually lead to hardening of the arteries and cardiovascular disease, which interferes with blood flow . . . .” And strong blood flow is essential to facilitate the erection process.

Offering added insight into the damage that excessive alcohol can do to erectile function is Tampa, Florida-based rheumatologist Harris McIlwain, M.D., co-author of “The Unofficial Guide to Conquering Impotence.” He points out that while one or two drinks may pose no problem for most men, it’s important to know your body, including when to stop drinking before sexual activity. He also notes that some health professionals suggest it may be wiser to have a drink or two after having sex rather than before, particularly for men who find that they are very sensitive to alcohol’s effects.

Dr. McIlwain cautions, however, that long-term overindulgence in alcohol can also lead to “damage to nerves that supply the penis and control erection, as well as the development of liver disease and other chronic diseases that make sexual activity and erection more difficult.”

In an article posted at NetDoctor.co.uk, David Delvin, M.D., co-author of “Sex: How to Make It Better,” says that even a surprisingly moderate amount of alcohol can foul up your sex life. He cites data from a 2014 survey of young people that was conducted by Ipsos MORI, a British market research firm, on behalf of the U.K.’s Family Planning Association:

As this data makes clear, overindulgence in alcohol poses a far broader threat than temporary difficulty in getting and keeping an erection. Dr. Delvin points out that while many men think alcohol increases “horniness,” prolonged and heavy use of alcohol is more likely to lead to a condition known as “brewer’s droop” and may eventually cause a loss of interest in sex.

While it’s important to draw a distinction between occasional social drinking and alcohol dependence, it’s also important to be aware that over time one’s alcohol consumption can evolve from one state to the other. Prolonged heavy drinking damages the liver, which in turn can upset your body’s delicate hormonal balance. For men, this can lead to testicular atrophy, impotence, and even sterility.

If you are interested in the convenience of ordering prescription ED medications like Viagra online with maximum convenience and outstanding customer service, we invite you to visit eDrugstore.com.