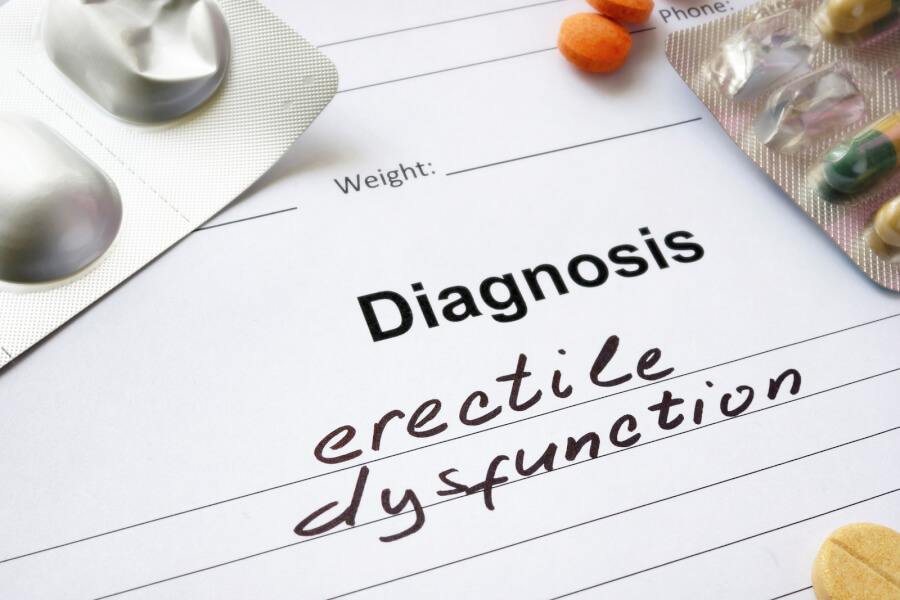 The average cost per dose when you buy a pack of eight Staxyn dissolvable tablets at a dosage of 10 mg is $36.94 as of December 2018.

Among the impotence drugs currently on the market in this country, Staxyn is unique. It is the only one of the so-called PDE5 inhibitors that dissolves on your tongue without liquid, making it particularly easy to take no matter where you are.

The active ingredient in Staxyn is vardenafil, the same active ingredient found in Levitra, which comes in tablet form but must be taken with water. Neither drug, nor for that matter any of the other PDE5 inhibitors, will spontaneously create an erection. You’ll have to get that the old-fashioned way, through an upsurge in feelings of sexual desire or in response to physical stimuli to your genitals.

It’s Not a Cure for ED

Likewise, none of these prescription drugs is a cure for erectile dysfunction, but they all help to temporarily improve blood flow to facilitate the erectile process. While they may not work for everyone with erectile dysfunction, clinical studies have found that they are safe and effective for use in roughly two-thirds of men suffering from some degree of impotence.

If you’re looking for some help in getting and keeping an erection and if the convenience and ease of use Staxyn appeals to you, you can purchase four orosoluble 10-milligram tablets from eDrugstore.com. for $182, or $45.50 per dose. If you have not used the drug previously, starting with a smaller purchase makes sense. Some men find that one type of PDE5 inhibitor works better for them than the others. And in some rare cases, men find that a particular impotence drug may not work for them at all. Or it may have side effects that are problematic.

However, once you’ve tried the drug and found it to your liking, you can reduce the cost per dose by increasing the number of tablets you buy. For example, increase your order to eight 10-milligram tablets, for which you’ll pay a total of $344, or $43 per dose. The price per dose drops further with larger orders.

As previously noted, Staxyn belongs to a family of medications known as PDE5 inhibitors, so-called because they temporarily disable an enzyme known as phosphodiesterase-5 that can interfere with erectile function. To understand how Staxyn and other PDE5 inhibitors, such as Viagra, Cialis, Levitra, and Stendra, work, it helps to have a basic understanding of the erectile process.

Things Get Started in the Brain

The triggering mechanism for erection is the brain, which upon detection of feelings of sexual desire or physical stimuli to the genitals sends a flood of nitric oxide toward the pelvic region. The nitric oxide sets off additional chemical reactions, one of which produces a compound known as cyclic guanosine monophosphate, or cGMP.

Vital to the erectile process, cGMP helps to relax the smooth muscles lining the blood vessels that supply the penis, thus increasing blood flow. But one of the main functions of the PDE5 enzyme is to break down cGMP. In a man with unimpeded blood flow to the penis, this is not that big a problem. However, in men whose blood flow is already compromised, the enzyme’s attack on cGMP can make it difficult or even impossible to get and keep an erection.

It is at this point that PDE5 inhibitors come into play. By temporarily disabling the PDE5 enzyme, Staxyn and the other impotence drugs allow cGMP to do its job of dilating blood vessels so that the erectile process can proceed. Because Staxyn tablets dissolve in the mouth, the drug gets into the bloodstream more quickly than is the case with other PDE5 inhibitors that must be taken with liquid and then broken down in the digestive tract. The typical onset of action for Staxyn is 15 to 30 minutes after the drug is taken. Its effects usually last four to six hours.

Introduced in 2010, Staxyn is a joint venture of Bayer HealthCare Pharmaceuticals and GlaxoSmithKline, the same companies behind Levitra, which also has vardenafil as its active ingredient. However, unlike Levitra, which is available in a range of strengths, including 2.5, 5, 10, and 20 milligrams, Staxyn comes only in 10-milligram tablets that dissolve in the mouth.

Staxyn, like the other PDE5 inhibitors, is designed to treat erection problems caused by insufficient blood flow to the penis, which is the largest single cause of impotence. However, for those suffering from erection problems that are psychological in origin, Staxyn is unlikely to have more than a placebo effect on erectile function. Erectile dysfunction of psychological origin, which accounts for 10 to 20 percent of all impotence, usually requires psychological counseling and/or medication. Making it even more difficult to overcome this form of impotence is the fact that many antidepressants themselves can cause erection problems. However, by working with your doctor you probably can find a drug that addresses your problems of depression and anxiety without interfering with your erectile function.

It’s Not for Everyone

Staxyn isn’t for everyone. If your doctor has told you to avoid sexual activity because of underlying health problems, such as advanced heart disease, you should follow that advice. Staxyn should never be taken at the same time as other nitrate-based drugs, such as the nitroglycerin tablets used to treat angina. It should also be noted that the recreational drugs known as poppers usually contain either amyl nitrate or butyl nitrate and are incompatible with Staxyn or any of the other PDE5 inhibitors. Both the nitrate-based drugs and the PDE5 inhibitors cause a decrease in blood pressure. Taken together, the resulting decline in blood pressure could be life-threatening.

Staxyn also contains phenylalanine, an essential amino acid, so-called because the body cannot manufacture it on its own and therefore must acquire it through dietary or supplementary means. For this reason, Staxyn should be avoided by men suffering from phenylketonuria, or PKU, a rare condition that allows a dangerous buildup of phenylalanine levels in the blood.

Staxyn’s side effects are generally mild. Among the most common adverse effects of the drug are back pain, dizziness, flushing, headache, indigestion, and runny or stuffy nose. However, even if you do suffer from one or more of these side effects after taking Staxyn, you may find that they disappear altogether upon continued use of the medication. Although rare, there are a few more serious side effects that can occur. These include a decrease or sudden loss of either hearing or vision and an erection that lasts for more than four hours. In the unlikely event that you should experience one of these side effects, it’s important that you seek medical attention immediately.

If you feel that Staxyn could help you to regain more normal erectile function and would like to give the drug a try, visit the website of eDrugstore.com, a reliable online supplier of Staxyn as well as the other PDE5 inhibitors. Click here to review our ED medication guide.