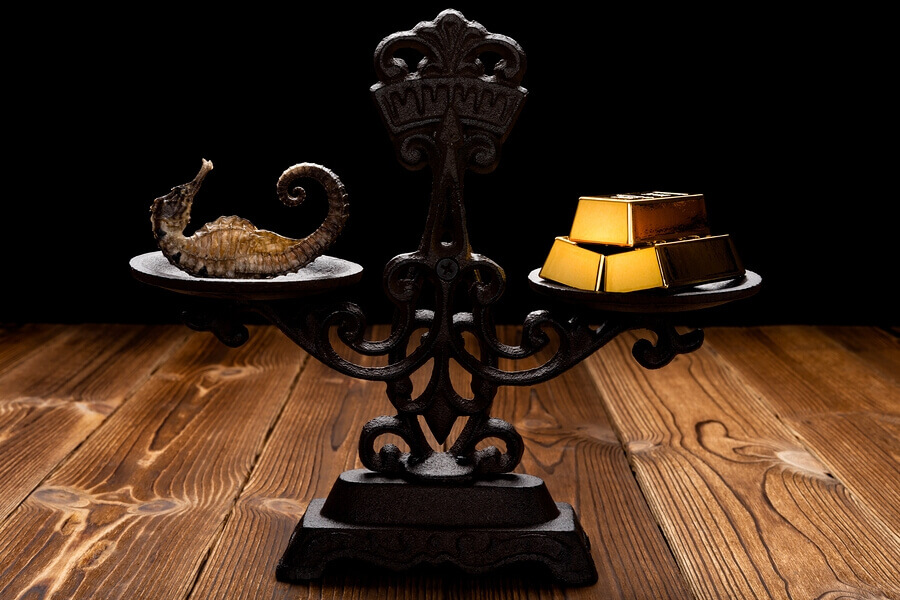 Seahorses, used in traditional Chinese medicine as a remedy for erectile dysfunction and an assortment of other ills, face an existential threat as their numbers in the wild dwindle.

The booming international trade in seahorses increasingly threatens the survival of these marine creatures as a species. The source of the demand for these threatened members of the hippocampus genus is their reputed potency as a remedy for erectile dysfunction.

Hong Kong, the bustling but troubled special administrative region that lies on the eastern side of the Pearl River estuary in southern China, is the center of the international trade in seahorses. Stroll the streets of its Sheung Wan neighborhood, the heart of the city’s trade in the herbs, dried fungi, and other remedies used in traditional Chinese medicine, and you’ll see jars filled to overflowing with dried seahorses.

Hong Kong’s South China Morning Post estimates that 25 million seahorses are being traded each year, with most destined to be used in concocting remedies that are part of traditional Chinese medicine. And among the most popular of the seahorse remedies is the one said to cure male impotence.

The pharmacopeia of traditional Chinese medicine calls for dried seahorse to be mixed with herbs and boiled into a tea that’s said to treat not just ED but also infertility and premature ejaculation, according to Australia’s 10Daily. Further threatening the survival of seahorses in the wild is the use of the creature in other Chinese remedies, including those for aging, arthritis, asthma, and baldness.

Popular in Other Countries Too

Although China is undoubtedly the center of the trade in seahorses, they are also popular as a remedy for ED in a number of other Asian countries, including Indonesia, the Philippines, Singapore, Taiwan, and Thailand.

According to an article posted at CNN.com, Canadian-based Project Seahorse reported that populations of at least 11 seahorse species dropped between 30 and 50 percent over the past 15 years.

Provisions of the Convention on International Trade in Endangered Species of Wild Fauna and Flora (CITES) permit limited trade in seahorses, but only those that can be proven to have been harvested legally and sustainably. Sadly, those provisions are often ignored by fishermen eager for the high prices paid for seahorses on the black market.

After CITES provisions on the seahorse trade were announced, several countries, including Indonesia, the Philippines, and Thailand, announced total bans on seahorse exports. However, subsequent checks by Project Seahorse have revealed that these countries, particularly Thailand, remain major exporters of these endangered marine creatures.

The allure of seahorse-based remedies for ED stems from both tradition and personal finances. After all, a Chinese folk remedy for ED is usually less expensive than a Viagra pill. However, the availability of less expensive generic ED drugs has narrowed that price gap and put modern medicine within the financial reach of many more consumers.

Many men find that they can save both time and money by ordering their ED medications online from eDrugstore.com, which has been in business since the late 1990s. Based in Tempe, Arizona, the longtime prescription drug service stocks a full range of ED medications, including all brand-name and generic drugs.

If you don’t yet have a prescription, take advantage of eDrugstore’s complimentary consultation service that will put you in touch online with a physician licensed to practice in your state. If the doctor finds that you’re an appropriate candidate for the drug, a prescription will be authorized. And shipping is free. To learn more, visit eDrugstore’s Erectile Dysfunction page.