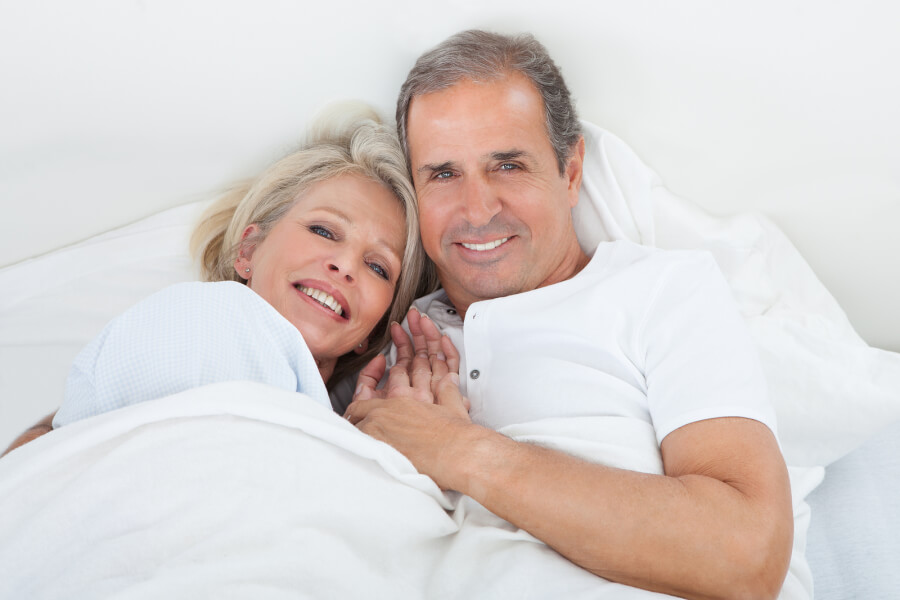 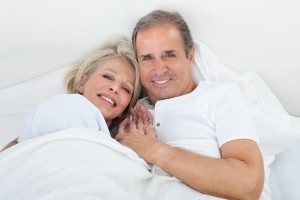 In an AARP survey of men and women over 50, twice as many men expressed excitement about the coming availability of a drug to increase female sexual desire.

According to the manufacturers and proponents of Addyi, the drug recently approved for the treatment of decreased sexual desire in women, this medication is the answer to a cry for help from millions of American women. As it turns out, the prospect of a drug to fire up the female libido is also a very welcome prospect among men.

Expected to reach pharmacy shelves sometime during the final quarter of 2015, Addyi is designed to treat hypoactive sexual desire disorder, or HSDD, the most common form of sexual dysfunction in women. In clinical tests, the drug’s active ingredient, flibanserin, helped to boost sexual desire and resulted in a modest increase in the number of satisfying sexual events experienced by study participants.

Men Excited, Women Not So Much

Among one particular demographic — men over the age of 50 — the imminent arrival of the drug has generated considerably more excitement than among women in the same age bracket. An AARP survey found that 41 percent of male respondents over the age of 50 said they would encourage their partners to use the drug if needed. But only 21 percent of the women over 50 who were surveyed said they would take the pill if needed to fire up their libido.

The AARP survey about Aadyi is part of an ongoing series of polls the organization is conducting to sample the views of Americans over the age of 50 on issues that affect their health, finances, and everyday lives. The inclusion of the Aadyi question is a bit curious, since the drug, as approved by the FDA, is specifically indicated for the treatment of HSDD in premenopausal women. The average age for the onset of menopause is 51.

Although the drug has not really been tested in postmenopausal women, it is entirely possible that some physicians may prescribe it for women in this group if they feel it can be helpful, although such use would be considered off-label.

However, in all the talk about a female answer to male drugs such as Viagra, Cialis, and Levitra, many men may have absorbed little more than the headlines, expecting that Aadyi would indeed work like a “pink Viagra,” producing results pretty much on demand. And that is a serious misconception about this new drug, one promoted and perpetuated by the media’s depiction of Addyi as “female Viagra” or “pink Viagra.” 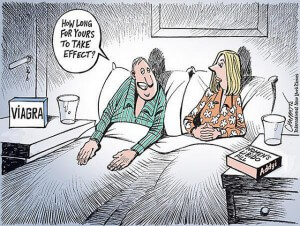 This cartoon perfectly captures a common male misconception about Addyi, the new drug designed to fire up the female libido.

Perhaps the most problematic of all forms of male sexual dysfunction is the inability to get and keep an erection strong and long-lasting enough for intercourse. After decades of being told that such problems were all in their head, men learned in the late 1990s that a more likely cause of impotence was insufficient blood flow to the penis. This new knowledge arrived along with a drug that promised to help affected men to overcome the problem. Enter Viagra, the little blue pill that revolutionized the treatment of male sexual dysfunction.

A Quick Fix for Men

With the advent of Viagra and the other similar drugs that followed, men now could pop a pill, albeit a relatively expensive one, and be ready for sex within an hour or less. It was as easy as that.

And here is where some of the confusion has probably arisen with regard to the new medication that promises to help women recapture their interest in sex. Labeled “pink Viagra” or “female Viagra” by some of those in the media, Addyi seems to some men to be a male version of the little blue pill. Except that it isn’t. Not by a long shot.

Most erection problems are much more straightforward and more easily treated than decreased sexual desire among women. Improve blood flow to the penis temporarily, and it now becomes possible for many men who have had persistent erection problems to get and keep an erection strong enough for normal sexual activity.

Addyi Must Be Taken Daily

To be effective, Addyi must be taken every day, and it may take several weeks or even months before women begin to notice a renewed interest in and desire for sex. And that’s only if the pill works for them. In clinical trials conducted before Addyi was approved by the FDA, not all women responded to the effects of the drug. While not all men get their money’s worth from Viagra or Cialis, those drugs are effective for a large percentage of men. A higher rate of efficacy than Addyi can boast. 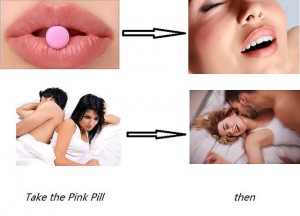 This diagram oversimplifies the effects of taking the so-called “pink Viagra.”

Addyi’s mechanism of action is altogether different from those of the male impotence medications, which can provide a relatively quick fix to erection problems by temporarily optimizing blood flow to the penis. Instead, Addyi works on brain chemistry to achieve its goal of increasing sexual desire. As previously noted, this is not a quick fix and takes time to achieve. The drug lowers brain levels of serotonin, a neurotransmitter known to inhibit sexual desire, while at the same time increasing levels of dopamine and norepinephrine, both of which are associated with increased sexual desire in women.

And before men begin pressuring their female partners to try Addyi, they should be aware that the flibanserin-based drug can cause some pretty serious side effects, namely severe low blood pressure and fainting. So concerned about these side effects was the FDA that it ordered that the new drug be prescribed and dispensed under the agency’s risk evaluation and mitigation strategy (REMS) program.

Under the regulations of the REMS program, prescribers and pharmacists must take a course and pass a test proving their understanding of the program before they will be allowed to either prescribe or dispense REMS drugs. Online training courses covering the fundamentals of the REMS program will be available, after which those who’ve taken the course can take a test to become REMS-certified.

The FDA also ordered that Addyi be dispensed only with a boxed warning on its packaging insert to alert women to the dangers of taking the drug concurrently with alcohol or drugs that interfere with the breakdown of Addyi in the body. Taking either alcohol or so-called CYP3A4-inhibitors at the same time as Addyi can exacerbate the drug’s adverse side effects. The liver’s CYP (Cytochrome P450) enzymes play a key role in the body’s metabolism of medications, and the CYP3A4 enzyme is perhaps the most prevalent of all such liver enzymes. Nondrug inhibitors of the CYP3A4 enzyme include grapefruit and grapefruit juice.

Just to be sure that women have been fully informed of Addyi’s potential risks, the FDA approval also requires that female patients for whom the drug is prescribed sign a statement indicating that they have been schooled in the drug’s pros and cons.