Is “Manopause” Real? And Can Viagra Solve It? 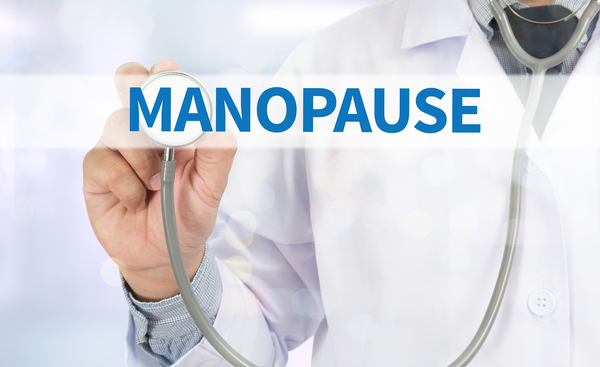 “Manopause,” sometimes called male menopause, is associated with an age-related decline in the production of testosterone, the primary male sex hormone.

Although it may sound like fodder for late-night comedians, “manopause,” the male version of menopause or perimenopause in women, is really a thing, at least in the view of many medical professionals. While it’s not as universal among older men as it is among women, male menopause can be every bit as troubling to those whom it does affect.

The symptoms of “manopause,” also known as male menopause or androgen decline, include depression, fatigue, weakness, and sexual problems, the latter of which could be a drop in sexual desire as well as erection problems.

As is the case in menopause, “manopause” is associated with a drop in sex hormone production — primarily testosterone in men. A decline in blood levels of testosterone affects different men in different ways. Some seem to experience little or no adverse symptoms although their testosterone levels are down sharply, while others appear more sensitive to this drop in hormone levels.

While erection problems are more common among older men, most medical professionals ascribe such problems not to “manopause” or aging but rather to vascular problems that are more common in older men than in those who are younger. However, these vascular problems are not an inevitable consequence of aging but rather a reflection of years of poor lifestyle choices and underlying health problems that went untreated or were inadequately treated.

Viagra May Not Help

If one accepts that “manopause” is caused by an age-related decline in testosterone, it’s unlikely that Viagra will have more than a placebo-type effect on the problem. However, if a man suffers simultaneously from “manopause” and vascular-related ED, the use of Viagra or one of the other oral impotence medications can at least provide temporary relief from the ED symptoms.

Symptoms Can Appear in Late 40s

Sadly, some men suffer from health problems that may trigger a sharp reduction in testosterone production at a much earlier age. And reduced levels of testosterone can lead to the symptoms associated with “manopause.” This means that those men could begin to experience “manopause” symptoms as early as 45 or 50, while some lucky others might not see symptoms until age 70 or shortly thereafter.

If you suspect that you may be suffering from “manopause,” talk to your doctor who can run the necessary tests to confirm such a diagnosis. He likely will perform a thorough physical exam and question you closely about the symptoms you’ve been experiencing. To rule out other medical causes of these symptoms, the doctor may order tests to exclude alternate explanations for your problems. And a blood test can be prescribed to definitively pinpoint your blood levels of the male sex hormone.

Low T Not an Issue for Some Men

Many men who’ve undergone testosterone replacement therapy report that it has dramatically reduced their “manopause” symptoms. However, as with hormone replacement therapy in women, this same approach in men is not without some potential side effects. Some of those side effects are relatively mild and easily tolerated. These include acne or oily skin, mild fluid retention, and decreased testicular size. 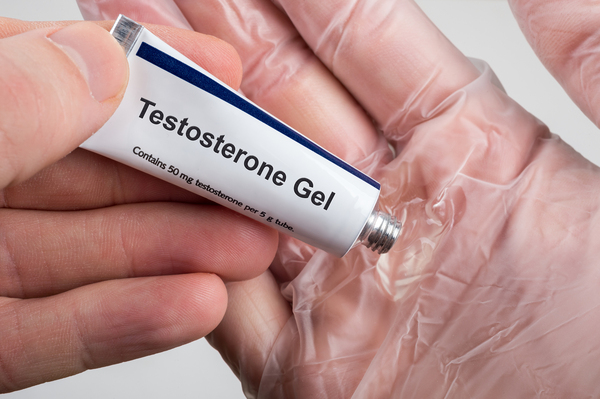 Testosterone replacement therapy is available in multiple forms, including a topical gel such as the one pictured above.

However, TRT can also increase a man’s risk of heart attack or stroke, stimulate the growth prostate tissue, increase the risk of prostate cancer, cause an enlargement of the breasts, exacerbate the symptoms of sleep disorders, including sleep apnea, and lead to mood swings and increased aggression.

Interest in male menopause isn’t new. In fact, it was the subject of considerable study from the late 1930s until the mid-1950s, according to an article about the medicalization of male menopause that appeared in a 2007 issue of “Social History of Medicine.” That article, written by Elizabeth Siegel Watkins, Ph.D., who was at that time affiliated with the Department of Anthropology, History, and Social Medicine at the University of California, San Francisco, said the topic virtually disappeared from the radar until the late 1990s.

The resurgent interest in male menopause, wrote Watkins, coincided with Big Pharma’s marketing of testosterone replacement therapeutics. She expressed skepticism about the authenticity of “manopause” as a serious disorder, theorizing that all the attention paid to female menopause somehow made it reasonable to suggest the existence of “a parallel, if not identical, stage in the life-course of men.”

If you’re interested in reading more about sexual health and function, as well as other articles of interest to health consumers, check out our blog.