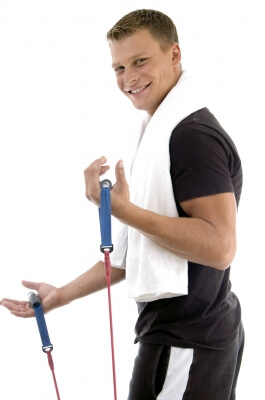 Exercise can save your erection

You’ve tried pills. You’ve tried wacky home remedies. You find yourself unable to achieve an erection, and you’re willing to try anything and everything to get back to normal. Well, according to recent research, the best way to save your erection is to start making better life choices.

New research from the University of Adelaide in Australia has found that men who suffer from erectile issues saw their problems improve dramatically after exercising, improving their diet, getting more rest, losing weight, and drinking less alcohol.

The study, which was published in the Journal of Sexual Medicine, stated that 29 percent of the men who participated in the project reversed their problem just by making lifestyle changes.

For the study, researchers followed 810 men for a period of five years, collecting data. The data revealed that nearly 31 percent of the participants developed some type of erectile issue over the period of the study.

As the study progressed, the researchers recommended the subjects make positive lifestyle choices, such as exercising regularly, eating better, and cutting down on alcohol.

By the end of the study, researchers found that a large number of the men had managed to cut down the severity of or eliminate entirely any erectile problems. The researchers chalked these numbers up to good, old fashioned healthy living, finding that the men who had opted for a better lifestyle found it easier to bounce back from their erectile issues.

Researchers stressed that while medication can be an important aspect of recovering from erectile problems, the first step should be to improve your quality of living.