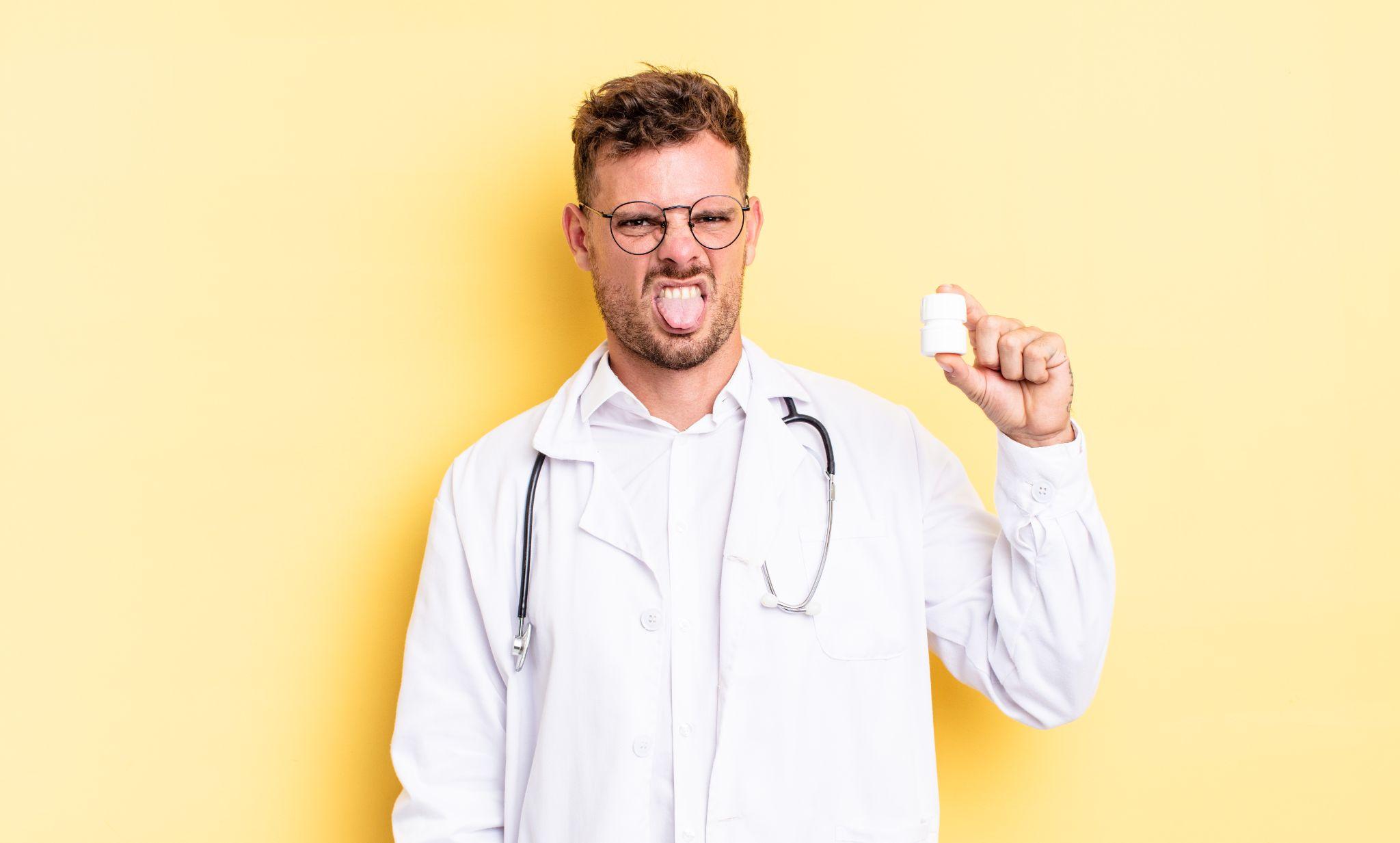 Zyrexin is a typical herbal ED supplement, boldly advertised as “the world’s strongest sexual enhancer.” According to its label, Zyrexin is “the one that works.” But does it? Let’s explore what Zyrexin is, how well it works in comparison to the FDA-approved medications Viagra and Cialis, and what else you need to know before using it.

Zyrexin is a men’s health supplement that promises to revive your erections. Unlike other herbal ED supplements, Zyrexin claims to increase the blood flow to the penis, mimicking the action of FDA-approved drugs like Viagra and Cialis.

All you have to do is swallow two pills, and within an hour, you will have the ability to achieve a strong erection with effects that last for 24 hours.

Research suggests that while some ingredients in Zyrexin may benefit erectile health in small ways, there is no good scientific evidence that proves the supplement works as advertised. Worse, some ingredients may be toxic.

What is a Proprietary Blend?

Proprietary blends have a notoriously shady reputation in the supplement industry.

The U.S. Food and Drug Administration (FDA) does not regulate supplements as they do prescription medications. They do, however, require dietary supplement makers to list the ingredients they use in their products by weight and quantity — unless they call their products “proprietary blends.”

If a supplement maker calls its product a proprietary blend, it does not have to list the quantities of the individual ingredients; that information is considered a trade secret. This secretiveness makes it almost impossible to assess the effectiveness of an ingredient or the consistency of a product.

Even if a product proves beneficial initially, supplement makers can reduce the quantity of an effective but expensive ingredient at any time without having to change their labeling. In other words, they can downgrade their formula to upgrade their profits.

So what do we know about what’s in Zyrexin?

Because the manufacturer of Zyrexin, Superbalife International, doesn’t have to list the quantities of the ingredients it uses, there’s no way to know how much of any individual ingredient you’re taking, or even if one batch of the product will be the same as the next one you buy.

Believe it or not, the ingredients in your bottle of Zyrexin may depend on where you bought it.

If you purchased the product from Walgreens, the formula may contain 40 milligrams of niacin, shown as the first ingredient on the label. However, niacin isn’t on the ingredients list of any other labels we investigated, including Zyrexin sold by Walmart, CVS, and Rite Aid.

We tried to visit Superbalife’s website to clear up the mystery, but it turns out they don’t have one. One search led us to www.zyrexin.com, but this brought us to a single page with an image of the product and the names of three retailers who sell it: Walgreens, CVS, and Rite Aid. That’s it.

There was no ingredients list and no links to more information of any kind about this product. We were surprised by this. If this product is “The One That Works” as they claim, wouldn’t they want to prove that claim with testimonials from lots of satisfied customers on their product sales page?

We found it odd that not only are there no testimonials posted for this product, there isn’t even a website.

But back to the niacin. While we can’t explain why niacin shows up only in the Walgreens formula, we can guess why niacin might be included in an ED supplement. A 2021 study found that niacin can improve erectile dysfunction, but the trial only studied men who had elevated cholesterol levels.

More telling still, note that the doses found effective in the study — 500-1500 milligrams — are far greater than the 40 milligrams listed for the Walgreens formulation of Zyrexin.

Although the FDA doesn’t require supplement makers to divulge the quantities of proprietary blend ingredients, they do have to list those ingredients in order from the highest quantity to the lowest.

Here’s the breakdown of Zyrexin’s proprietary ingredients, in the order they appear on the label:

Because epimedium is listed first, it’s likely the main ingredient in Zyrexin (excluding the niacin in the product sold by Walgreens), but again, there’s no way to know that for sure.

Yohimbine is another herbal compound that may impact ED. Various studies looked at doses from a few hundred milligrams per day to 6,000 milligrams. They concluded that yohimbine alone does not improve sexual function, but it may improve the effects of other ED drugs and herbal compounds. However, yohimbe taken orally can be toxic.

Unfortunately, those compounds, called scabrosin esters, may be toxic; they’ve been found to cause cell death in humans. The herb may also contain high levels of heavy metals. Men in New Zealand have been warned by several sources not to use xanthoparmelia to treat their ED.

Ginkgo biloba extract is known as a substance that increases blood circulation to the brain and can help improve memory. The same mechanism may improve erections and sexual function in rats. However, an exhaustive 2021 review of studies found that it had a limited impact on human sexual function and required further research.

A traditional Chinese herbal supplement, Cnidium monnieri may act as a smooth muscle relaxant and PDE5 inhibitor in rabbits. But we know little about how it works, whether it works for humans, and whether it’s safe to take. Since cnidium may slow blood clotting, taking it could be dangerous for some.

Mucuna pruriens may improve sexual function in diabetic rats, but it’s unclear if it can produce similar effects in humans.

The velvet bean quantity in Zyrexin is likely small, given that it’s close to the bottom end of the ingredient list.

The science concerning the effects of Butea superba on erectile function is questionable.

A 2010 study initially found the compound to be as effective as sildenafil citrate (Viagra). However, testing of a second batch showed no effect at all on ED. Researchers later discovered that the manufacturer had laced the first batch of the experimental drug with a PDE5 inhibitor, a common practice with ED supplements. Pure Butea superba extract had proved ineffective.

Worse, high doses of Butea superba may be toxic and may actually reduce testosterone levels.

L-arginine is an amino acid the body needs to produce nitric oxide, which widens and relaxes blood vessels, allowing for the blood flow necessary for healthy erections. L-arginine has long been known to help with this process.

However, the recommended dose of l’arginine for ED is from 1500-5000 mg. Zyrexin contains far less than that; the total of all of Zyrexin’s ingredients is only 1050 milligrams per “serving,” or 2-pill recommended dose.

The Zyrexin reviews available online are a weird mix. On most sites, they appear to be widely split between 1 star and 5 stars with relatively few in between.

User reviews at Walgreens and Walmart paint a clearer picture of users’ experience with the product.

The product fares a little better at Walgreens, with an overall rating of 3.1 stars. Most reviews were split pretty evenly between 5 stars and 1 star.

Among those who rated this product poorly at both sites, here are some common complaints:

Zyrexin versus Viagra and Cialis

Zyrexin’s track record is no match for FDA-approved and scientifically supported ED drugs like Viagra and Cialis.

As discussed above, researchers have found that unethical supplement makers have laced at least two (Butea superba and Xanthoparmelia scabrous) of the Zyrexin ingredients with sildenafil and tadalafil at some point to enhance their performance. That fact alone reflects poorly on the product’s effectiveness.

If you’re going to spend money on a male enhancement product that may work only because it contains sildenafil (Viagra) or tadalafil (Cialis), you’re better off buying Viagra or Cialis in the first place — medicines you can trust that have been proven to work for millions.

Don’t trust your sex life to a dubious and possibly toxic proprietary blend. Instead, choose medications that have been proven to work.

We carry Viagra, Cialis, Levitra, and all other FDA-approved erectile dysfunction medications as well as their generic versions. At eDrugstore, we deliver your orders quickly and discreetly, and virtual health visits and shipping are always free.