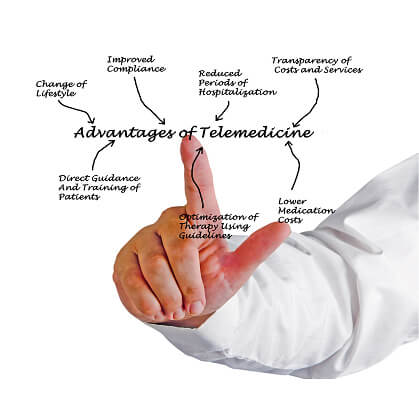 The Future of Health Care: Telemedicine and Robots 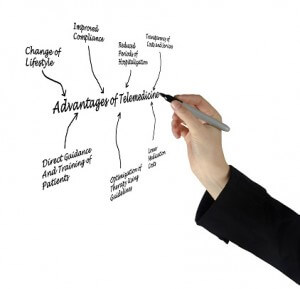 This chart identifies some of telemedicine’s biggest benefits.

While to some it may seem the stuff of science fiction, health care in this country is slowly but surely being revolutionized by the growing use of telemedicine and robotics.

Although the demand for health care is expanding at an ever-accelerating rate, the increase in the number of health professionals to serve these patients simply isn’t keeping pace. As a result, the health care industry is looking to do more with less. And one way to do that is through telemedicine, defined by the World Health Organization as ¨the use of information and communication technologies to improve patient outcomes by increasing access to care and medical information.¨

Based on a number of news reports from around the United States and the world, the marriage of robotics and telemedicine would seem to be a winning combination, particularly in the treatment of stroke. In one of the more recent announcements, as reported by KOTA-TV News, the Emergency Department of Regional West Medical Center in Scottsbluff, Nebraska, said it was expanding its capabilities in stroke treatment by introducing an onsite telemedicine robot.

The robotic device, known as the Collaborative Digital Online Consultant, is a mobile robot that features high-powered video cameras and allows instant access to neurological specialists based in Denver.

Alice Fillingham, clinical coordinator of Regional West’s Emergency Department says that the hospital’s emergency physicians are well acquainted with the telltale signs and symptoms of stroke and thus able to identify patients in need of urgent care. With the new service, the local emergency physicians will be able to instantly get second opinions from neurological specialists at HealthONE’s Swedish Medical Center in Denver, roughly 200 highway miles south-southwest of Scottsbluff.

A Second Set of Eyes

Of this new service, Fillingham said, ¨The collaboration with Swedish gives us one more step, these guys are all stroke certified neurologists, so it’s a second set of eyes to work collaboratively with our Emergency Department physicians to just make our care that much better.¨

As of early March 2015, Regional West had already used the robot in caring for nine patients, according to Alicia Kunz, manager of the hospital’s Emergency Department. She noted that one of those patients had come in barely able to see. After the robot allowed a Denver neurologist to collaborate on the patient’s care, the patient now only has a slight bit of right-hand weakness and no visual problems to speak of. 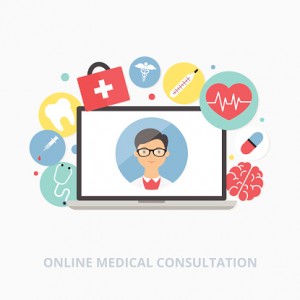 Telemedicine robots make it possible to bring medical expertise to patients who need it.

And Regional West is not the only health care provider to recognize the value of telemedicine robotics for meeting the need for rapid-response care in treating stroke patients. Summa Health System, headquartered in Akron, Ohio, recently announced that beginning in April 2015 it would install two telemedicine robots primarily to address the needs of stroke patients. Summa is partnering with InTouch Health, a California-based company that ¨provides technology-enabled services to health care providers for the delivery of high-quality clinical care virtually anywhere, anytime.¨

The Summa robots ¨allow neurologists to perform live real-time audiovisual consultations with emergency teams to speed the delivery of clot-busting drugs . . . that are proven to halt and reverse stroke damage,¨ according to the company’s press release. One robot will be installed at Summa Akron City Hospital and the other at Summa Barberton Hospital.

According to Susana Bowling, M.D., Summa’s medical director for neurosciences, the ¨robots, in effect, will serve as a portal through which a stroke specialist anywhere can be virtually present at a moment’s notice. Acute stroke care is such a time-sensitive issue, with a small window of treatment and, often, relatively limited access to stroke specialists.¨

Thanks to advances made possible by telemedicine’s high-tech technologies, researchers at the University of Texas Health Science Center in Houston announced recently that they are able to enroll patients at other hospitals into an acute stroke clinical trial.

Tzu-Ching Wu, M.D., director of the telemedicine program at UTHealth Medical School, said that until recently clinical trials for stroke were limited ¨to patients who arrive at large stroke centers that have the expertise to treat stroke quickly to minimize damage to the brain.¨ Telemedicine and robotics now open the doors to such trials to everyone, which represents an important advance in medical science.

The groundwork for the use of telemedicine robots to provide remote care for patients was laid down in late 2012 when the U.S. Food and Drug Administration gave its stamp of approval for hospital use of a remote-presence robot known as RP-VITA. Developed by iRobot, the same company that gave us the Roomba robotic household vacuum cleaner, the RP-VITA allows doctors to monitor patients remotely. Although it was developed by iRobot, the RP-VITA is being marketed by InTouch Health, which also developed some of the software the robot uses. 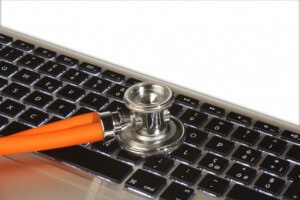 Telemedicine offers the health care industry a way to do more with less.

In a news release published at the time of the FDA approval, iRobot said ¨the robot combines the latest in autonomous navigation and mobility technologies developed by iRobot with state-of-the-art telemedicine and electronic health record integration developed by InTouch Health.¨

FDA approval for the RP-VITA cleared the robot for a wide array of uses, including before, during, and after surgery and for cardiovascular, critical care, examination, neurological, prenatal, and psychological uses. RP-VITA provides for real-time audio/video communication between patients and hospital attendants and a remote physician.

The RP-VITA robot is available with a variety of cameras, display screens, microphones, and speakers, all of which can be custom-fit to the purpose the robot is designed to serve. Also available are a number of accessories, one of which is an integrated electronic stethoscope. Medical professionals can operate the robot remotely by using a joystick or mouse connected to their computer.

Can Navigate on Its Own

Although the RP-VITA robot allows a physician to control it remotely from a computer, it also has the ability to map out its own environment and can sense objects in its path so that it can navigate itself around a busy hospital without getting in anybody else’s way.

Welcoming FDA’s decision to approve the RP-VITA, iRobot CEO Colin Angle said ¨FDA clearance of a robot that can move safely and independently through a fast-paced, chaotic, and demanding hospital environment is a significant technological milestone for the robotics and health care industries.¨

And the bright prospects for telemedicine robots are by no means confined to the United States, although for the last couple of years North America has accounted for the largest share of the global medical robotics market, according to a recent report from MarketsandMarkets, a Dallas-based market research company.

However, over the next few years, the company predicts that Asia will probably witness the most rapid growth for these emerging technologies. The company estimated the total valuation of the global medical robots market in 2013 at $1.78 billion. It is expected to reach a total value of almost $3.8 billion by 2018. That represents a compound annual growth rate of 16.1 percent from 2013 to 2018.