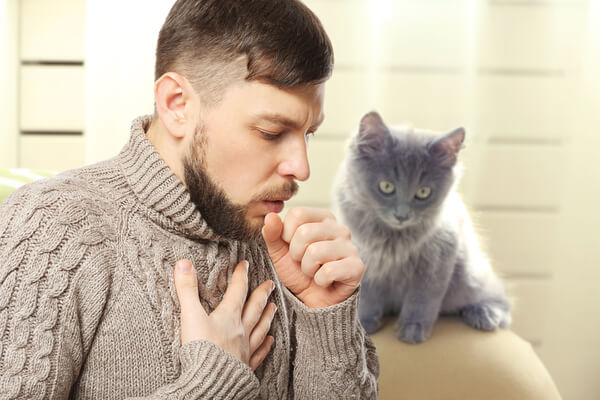 With spring and summer behind us in all but the balmiest of climates in the United States and Canada, the allergies caused by plant pollen and certain mold spores are no longer a major concern. But, sadly, the end of the growing season does not spell a temporary reprieve for allergy sufferers who now must deal with indoor allergens that are even more potent in the absence of ventilation as homes are locked down to keep out the chill of winter.

Many of these indoor allergens are actually present year-round. However, they are less bothersome during warm-weather months when houses are typically better ventilated and inhabitants are more likely to be spending time outdoors or at least somewhere away from home.

What Are Indoor Allergens?

Indoor allergens include animal dander from the pets who are almost family members in their own right, droppings from dust mites and cockroaches (even those that are unseen), and spores from molds that thrive indoors.

The allergy symptoms these indoor allergens cause are little different from those caused by outdoor allergens such as pollen from trees and other plants, as well as spores from molds that are more commonly encountered outside the home. Sneezing, coughing, itchy and/or watery eyes, and a runny or stuffy nose are among the most common of these symptoms.

Of the most bothersome indoor allergens, WebMD offers a bit more detailed information. Microscopic and thus invisible to the naked eye, dust mites flourish in pillows and other bedding. While the dust mites themselves are not allergens, their droppings and remains trigger allergic reactions when they become airborne. So it would not be unseemly to wear an allergy mask when plumping up the pillows or remaking the bed.

Not unlike the dandruff that troubles us humans and is found on and around our hair, pet dander is not the fur that animals shed but a dandruff-like material that affects not just dogs and cats but almost all animals with fur, hair, or feathers. So even pet birds give off dander that could trigger allergy symptoms in those who are sensitive to this type of allergen.

Perhaps the most insidious of all the indoor allergens is mold, which tends to grow in damp, moist areas, such as those found in the hidden recesses of the bathroom or dark corners of the basement. The spores from this mold triggers allergic reactions when they are inhaled.

The discomfort associated with allergies is not caused directly by the allergens themselves, most of which are harmless. However, because they are considered foreign to the human body, just like such infectious agents as viruses and certain bacteria, the immune system reacts to their presence by producing antibodies called Immunoglobulin E, or IgE.

According to the American Academy of Allergy, Asthma, and Immunology, the IgE then travels to mast cells that produce substances such as histamines and cytokines that cause the symptoms we associate with allergies. These, of course, include sneezing, coughing, eye irritation, and a runny nose.

While annoying and uncomfortable, these allergic reactions in almost all cases pose no real threat to life or limb. However, in a few extremely sensitive individuals, certain allergens, particularly those in foods and the stings of certain insects, even ants, can trigger an extreme allergic reaction, known as anaphylaxis. The latter can cause nausea, vomiting, skin rash, and a swelling of the airways, making it difficult, if not impossible, to breathe. Such allergic reactions should be considered medical emergencies.

For the vast majority of allergy sufferers, there are steps that can be taken to minimize exposure to both indoor and outdoor allergens, although eliminating such allergens altogether is virtually impossible. Interviewed for an article posted at MedicalXpress.com, Do-Yeon Cho, M.D., assistant professor of otolaryngology at the University of Alabama-Birmingham, offered a few helpful tips.

A Skin Test Could Be Helpful

To find out what, if any, allergens trigger allergy symptoms, you should visit an allergist or ear, nose, and throat specialist for skin tests and/or blood tests that can pinpoint the substances most likely to cause symptoms. Armed with the information such tests can reveal, you’ll be able to take steps to avoid such substances, at least as much as possible. If you’re an arborist who tests positive for allergies to multiple tree pollens, you might want to consider a new career. On the other hand, if grass pollen is problematic, you might want to hire a lawn care service.

Cho notes that some allergy symptoms, most notably coughing, sneezing, or a runny or stuffy nose, mirror those experienced by people suffering from the flu, which is caused by a virus and not allergens. He points out, however, that flu symptoms tend to be far more severe and also include a headache, a high fever, general achiness, and profound fatigue. If in doubt about whether your problem is allergy or flu, consult your doctor.

To the list of indoor allergens already covered, Cho adds a few that are less widely recognized but can trigger allergy symptoms as well. These include smoke from fireplaces, the wreaths and evergreen trees decorated for Christmas, and certain ingredients in candy.

Speaking of candy and other good (and bad) things to eat, nutritionist Trishna Joshi shared with TheActiveTimes.com some helpful tips about the ways in which diet can help control the symptoms of seasonal allergies.

While the nutrients in certain foods help to relieve allergy symptoms, Joshi notes that others can exacerbate allergic reactions. She suggests that you:

As you’re already seen, allergy symptoms can be extremely bothersome but are rarely a serious threat to your health. Many allergy sufferers get some relief from such symptoms by using over-the-counter antihistamines. However, recent research has shown that those suffering from allergic rhinitis, the most common of allergic reactions, would be best served by using an intranasal corticosteroid, in the form of a nasal spray, rather than oral antihistamines.

Although allergic rhinitis is also known as hay fever, the symptoms it describes can be triggered by indoor allergens as well as those outside. The recommendation that such corticosteroid nasal sprays be used comes from a recent review of relevant scientific literature about allergic rhinitis and the various methods used to treat it.

That review, published in the November 28, 2017, issue of the “Annals of Internal Medicine,” found that optimal relief from the symptoms of allergic rhinitis was observed in patients using nasal sprays. Some such sprays are available over the counter, while others are available by prescription only.

Available by Prescription and OTC

Brand names of over-the-counter nasal sprays include Flonase, Nasacort, and Rhinocort. Available by prescription only are Beconase, Nasonex, Qnasl, and Veramyst.

While the OTC nasal sprays listed above are available at the local drugstore or drugstore department of the big box stores, you will need a prescription, as previously noted, to purchase Beconase, Nasonex, Qnasl, and Veramyst.

Nasonex and Patanol, prescription eye drops for the treatment of allergic conjunctivitis, or pink eye, can both be ordered online from eDrugstore.com, a reliable online supplier of select prescription and OTC medications for nearly two decades. If you have a prescription from your doctor for either of these products, you can fax it or scan and email it along with your order to eDrugstore.

If you don’t yet have a prescription and would prefer to avoid the cost of a visit to the doctor, eDrugstore can set up an online consultation with one of its team of licensed U.S. physicians. If it’s determined that you are an appropriate candidate for the drug, a prescription with being authorized. To get started, click below to access a website where you can learn more about ordering online.