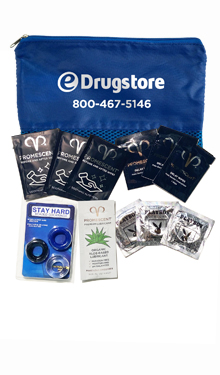 The PE kit will enhance your endurance and your performance with your partner. We designed the PE kit to help you achieve delayed, more reliable, and more intense ejaculations. The Kit allows you to have more control and enjoy the moment.

Desensitizing gels such as Stimula for men numbing lube can help to lower stimulation felt in your penis during sex, allowing you to last longer. The gel will numb the nerves of the penis, making it less sensitive hence delaying climax and preventing PE.

The Stimula gel should be applied to the underside of the penis shaft during an erection, right before sex. The gel should be used together with an ultra-thin condom to eliminate a numbing transfer to your partner.

Condoms reduce the amount of stimulation felt during sex, helping you to last longer and avoid premature Ejaculation.

A penis ring is a circle-like toy made of silicone rubber. It is placed at the base of a penis shaft to limit blood flow out of the penis, which helps you achieve harder, firmer and longer-lasting erections.

What is Premature Ejaculation

PE is one of the most common sexual issues facing men. 50% of men in the world has some issue with climaxing too early. You also need to know that there are methods of getting rid of it too. To fully understand what PE is, its symptoms, causes, and follow the recommended treatment.

Premature Ejaculation is when a man ejaculates sooner during sexual intercourse than he or his partner would like. No set time limit defines an Ejaculation as being "premature," but studies have shown that the normal man ejaculates between two to six minutes of sexual stimulation. If you perform less than two minutes, you might have Premature Ejaculation. PE occurs whenever you are not able to continue long enough to satisfy your partner.

The key symptoms of Premature Ejaculation include:

The exact causes of PE until now cannot be determined. But doctors believe it is a more complex and complicated interaction between psychological and biological factors.