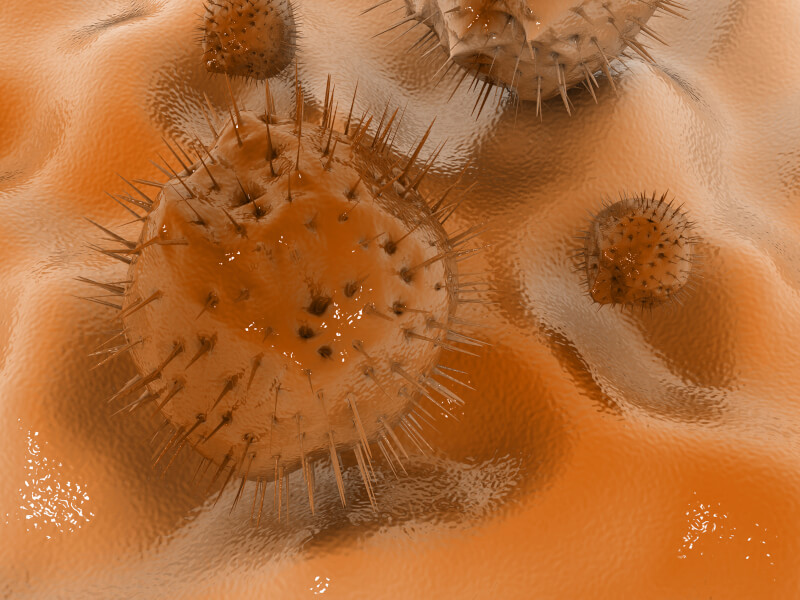 In a truly amazing turn of events, medical scientists are using the much-dreaded sexually transmitted herpes virus  to fight an even more frightening disease, namely cancer.

Herpes simplex, a sexually transmitted viral disease, is incurable and the source of untold pain and suffering for the men and women who are infected. But in this villainous virus, scientists see hope for a new and more successful way to attack cancer cells, which are notoriously hard to kill. It’s pretty much a case of fighting fire with fire, but to the scientists, it’s called virotherapy.

Scientists everywhere have been looking for innovative ways to kill cancer cells without doing irreparable damage to the noncancerous cells around them. Cancer cells seem to have an uncanny ability to shield themselves from the body’s immune system, which has as it primary function the protection of the body from foreign infectious agents, whether they be viruses, bacteria, or other alien microorganisms. As a result, killing cancer cells has proven to be a daunting task.

Interviewed for a recent article posted at Fusion.net, Howard L. Kaufman, M.D., a resident member of the Rutgers Cancer Institute of New Jersey, explains that in its simplest terms virotherapy means “using a virus to kill cancer cells.” Dr. Kaufman, who is also a professor of surgery at Rutgers’ Robert Wood Johnson Medical School, has been a pioneer in the study of virotherapy.

Dr. Kaufman points out that researchers believe that certain viruses “have a natural ability to kill tumor cells.” Perhaps even more importantly, scientists have discovered that introducing a virus into a patient’s body somehow triggers an immune response that is usually not present when the patient has cancer.

Much of what Dr. Kaufman says about the properties of viruses has been known for some time and has been the subject of extensive study. Cancer researchers long ago observed that some cancer patients who contract an unrelated virus tend to go into remission. But taking advantage of this characteristic of viruses has been difficult until relatively recently. Now, however, the full potential of virotherapy in the fight against cancer has been revealed, thanks to the advent of bioengineering.

The key to a viral attack on cancer cells lies in the way that viruses behave when they invade a host organism. The virus attaches itself to one of your cells and then injects its own unique genetic code into that cell. Once that has been accomplished, the virus hijacks your cell’s gene-making mechanism so that it can replicate itself over and over again, overwhelming your body with the virus.

While your body’s healthy cells have developed ways to fight off viruses, cancer cells have not done the same. As Dr. Kaufman explains, “Many normal cells have a complicated network of molecules to help protect against a virus.” However, cancer cells are deficient in these same anti-viral factors, leaving cancer cells vulnerable to viral attack, an approach that researchers like Dr. Kaufman have been hoping to exploit.

Back in the 1950s and 1960s, scientists made some attempts to harness the power of viruses in the fight against cancer. Back then, so-called oncolytic — cancer-killing — viruses were introduced into the systems of cancer patients, but the viruses themselves caused their own problems and in time fell victim to the patients’ immune systems, thus blunting the impact of their attack on the cancer cells.

In the modern era of bioengineering, scientists are now able to genetically modify viruses, such as herpes simplex, so that the virus itself doesn’t harm the patient but retains its ability to seek out and destroy cancer cells. These new capabilities have revived interest in the use of viruses to kill cancer cells. As this article is written, ClinicalTrials.gov, the National Institutes of Health website that follows clinical trials, lists roughly three dozen trials — prospective, active, or completed — to test the cancer-fighting abilities of virotherapy.

Dr. Kaufman was the lead author of a recently published study demonstrating the power of virotherapy when used in patients with late-stage melanoma, a deadly form of skin cancer. Study participants included 436 melanoma patients recruited at more than 60 cancer centers worldwide.

Roughly two-thirds of the test subjects received injections of a virotherapy drug called T-VEC, a genetically modified form of the herpes simplex virus type-1. Developed by Amgen, T-VEC’s full name is talimogene laherparepvec. The T-VEC was injected into the patients’ melanoma lesions. The remainder of the study participants got subcutaneous injections of granulocyte-macrophage colony-stimulating factor, or GM-CSF, which functions as a cytokine to stimulate the growth of white blood cells.

Among patients who got T-VEC, the overall response rate was more than 26 percent. A very impressive 16 percent of the T-VEC patients were still in remission six months after treatment with the drug. In contrast, patients who got GM-CSF had an overall response rate of 5.7 percent, and only 2.1 percent of this group were in remission six months after treatment. Additionally, researchers noted that T-VEC seemed capable of killing off cancer even after it had spread.

So impressive were the results of this study that an advisory panel of the U.S. Food and Drug Administration recommended in late April 2015 that T-VEC be approved. As this is being written, the FDA had not yet acted on the advisory panel’s recommendation, but approval could come at any time.

Although oncolytic virotherapy still awaits a green light from the FDA, a similar form of virotherapy has been in use in Latvia since 2008. Oncologists in the Baltic country use a drug called Rigvir, which is a non-modified virus used to treat melanoma and sarcomas, which are malignant tumors of the connective tissue, such as bone, cartilage, fat, muscles, nerves, and tendons.

Pioneering in the use of Rigvir is Latvia’s International Virotherapy Center, which reports that the drug has chalked up a promising success rate over the last few  years. In an interview with a writer for Fusion.net, Kaspar Losans, the center’s medical director, said, “We already have cases of astounding cure of cancer for patients at stage III and stage IV in our practice with Rigvir. Virotherapy, for sure, is the next step in cancer treatment.”

Virotherapy is not without some side effects, although they are generally mild. The side effects depend to a large degree upon the type of virus that is modified to create the virotherapy drug. Interviewed for the article at Fusion.net, Loren K. Mell, M.D., a virotherapy researcher at the University of California, San Diego, said that side effects are not only mild but also generally short-lived. Dr. Mell was involved in a recent clinical trial in which cancer patients were given a modified vaccinia virus in conjunction with chemotherapy and radiation. “The patients we treated definitely had flu-like symptoms. But it was temporary.”