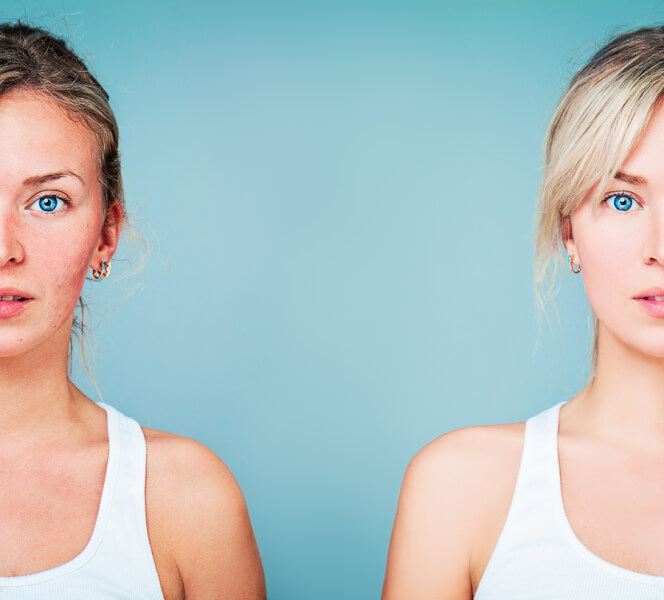 Widespread but poorly understood, rosacea is a disorder of the facial skin that is estimated to affect more than 16 million of Americans. Even more troubling is the fact that most people with rosacea don’t even realize they have it.

The National Rosacea Society, the world’s largest support organization for those with the skin disorder, reports a Gallup survey found that 78 percent of Americans know nothing about rosacea, including how to recognize its symptoms and what to do about them.

Because the precise cause of rosacea is unknown, the disorder has no cure. However, those stricken with the facial redness and bumps characteristic of rosacea outbreaks can control the condition by recognizing — and avoiding — the lifestyle and environmental factors that trigger these outbreaks. Also available are medications that can help minimize the number and severity of rosacea outbreaks.

While the list of such triggering factors is fairly extensive and varies from patient to patient, certain categories of foods and beverages have been identified as frequent triggers. If you think you may be suffering from rosacea, you should see a dermatologist. In the meantime, avoid these trigger foods or at least carefully monitor your skin’s reaction to determine how sensitive you are to them.

Because individual reactions to these so-called trigger foods and beverages vary greatly from one patient to another, you don’t necessarily need to remove all of these from your diet. But you should be aware that they have been associated with outbreaks of rosacea so that you can judge for yourself how they affect you.

In order to make a reasoned judgment about how these trigger foods affect you, you should first know a bit more about rosacea and its tell-tale symptoms.

MayoClinic.com defines rosacea as “a common skin condition that causes redness in your face and often produces small, red, pus-filled bumps.” Although anyone can suffer from the skin disorder, it is most commonly seen in middle-aged women with fair complexions.

The condition usually first appears as a redness on the cheeks, chin, nose, and/or forehead that tends to come and go. Left untreated, the frequency and severity of rosacea outbreaks increase. Eventually, “bumps and pimples often develop, and in severe cases the nose may grow swollen and bumpy from excess tissue,” according to NRS. This disfigurement and discoloration of the nose is known as rhinophyma, the condition that gave the late W.C. Fields the red and bulbous nose that was the screen actor’s trademark.

All of which brings us to what is probably the number one rosacea trigger among foods and beverages. And that is alcohol, for the copious consumption of which W.C. Fields was equally well-known.

In an NRS survey of 353 rosacea patients, 76 percent said that alcohol is a major trigger for their outbreaks. Red wine was the biggest culprit for respondents to the survey, with 72 percent reporting that it caused flare-ups of their condition. Forty-nine percent said white wine triggered outbreaks, and 42 percent cited beer as a significant trigger.

After alcoholic beverages, spicy foods rank the next highest among foods and drinks known to trigger outbreaks of the skin condition. In a separate NRS survey of rosacea patients, 45 percent of the 1,066 patients surveyed said hot and spicy foods such as salsa and Chinese mustard brought on symptoms of rosacea.

NRS recommends avoiding “hot” spices such as black and white pepper, cayenne and red pepper, and paprika. The organization even offers some substitution suggestions for those who want a hint of spice that is less likely to trigger rosacea outbreaks.

Just as sun exposure and hot weather rank near the top of environmental factors that trigger rosacea outbreaks, it appears that heated beverages bring on symptoms in many rosacea patients. In a 2010 survey conducted by NRS, 42 percent of the rosacea patients surveyed said hot beverages triggered signs or symptoms of the skin disorder for them.

For rosacea patients that can’t bring themselves to give up their daily cups of coffee, tea, or hot chocolate, the society suggests that that they serve them at a somewhat less steamy temperature or reduce their intake from three or four cups daily to only one or two.

For some rosacea sufferers, hot soups can act as a trigger as well.

In its survey of 1,066 rosacea patients, the NRS found that 13 percent reported that certain fruits triggered outbreaks, while 9 percent said they found that certain vegetables had a similar effect. The biggest culprits among fruits were avocados, bananas, citrus, figs, raisins, red plums, and tomatoes.

The vegetable offenders most often cited by rosacea patients include broadleaf beans and pods, such as lima beans, navy beans, or peas; eggplants; and spinach.

Eight percent of the respondents to the NRS survey of 1,066 patients reported that dairy products triggered signs or symptoms of rosacea. Among the dairy foods most often cited as problematic were sour cream, yogurt, and a wide array of cheeses, not including cottage cheese.

Histamines are organic compounds that are released as part of your body’s immune response to certain substances. Histamines are also present in certain foods. Among the foods that are either high in histamines or likely to trigger your body to release histamines are fermented alcoholic beverages, as discussed earlier.

Other histamine-rich foods include cured meats, such as bacon, hot dogs, luncheon meats, pepperoni, and salami; fermented foods, including kimchi, kombucha, and sauerkraut; and vinegar-containing foods, such as mayonnaise, olives, and pickles.

Other foods, beverages, and condiments identified as rosacea triggers don’t fall into any of the categories that have been covered up to this point. However, you should be aware that they could cause you problems. These include chocolate, beef liver, soy sauce, vanilla, and vinegar.

Although there is no known cure for rosacea, the U.S. Food and Drug Administration has approved Metrogel as a topical treatment to help control and relieve the symptoms of this common skin disorder. Metrogel is a powerful antibiotic gel that is also approved for the treatment of acne rosacea and chronic acne.

Rosacea patients in search of a reliable online supplier of Metrogel should consider eDrugstore.com, which sources the drugs it sells exclusively from U.S. licensed pharmacies. If you have a prescription for Metrogel, you can fax or scan and email it to eDrugstore with your order. Alternatively, eDrugstore.com can set up an online consultation with one of its contract physicians.