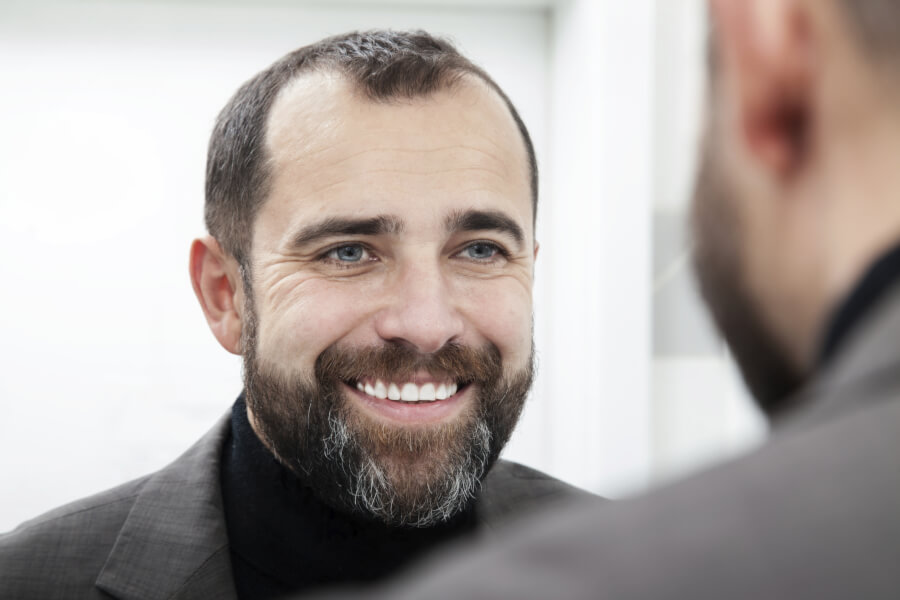 Hair loss is certainly not a new problem. In today’s society, some men decide to embrace the plans nature apparently had. Some shave their heads, and opt for the Yul Brenner look. That style works for a lot of men, but many more simply want hair restoration to regain what’s been lost, and stop the process of losing more hair.

Self-esteem is also connected to hair loss. So for generations as far back as can be remembered, men have experimented with myriad treatments in the hopes of retaining, and regrowing, their hair.

There are a lot of products on the market that claim to regrow hair. Natural supplements get quite a bit of attention, and some may offer a little help. Dr. Andrew Weil recommends dietary changes, such as adding Omega-3 fatty acids, which purportedly support a healthy scalp and hair. But solid evidence to support the use of supplements for reversing hair loss is almost nonexistent.

If you’re dissatisfied with what you see on your hair brush, and in the mirror, there are a few remedies that do help. One prescription is shaking up the industry, though, as its results are widespread and measurable.

Here are 4 of the most talked about solutions for hair loss, and what you can expect from each of them:

Rogaine is a Topical Hair Restoration Solution for Some Men

Rogaine, which is the brand name of Minoxidil, hit the market in the mid-1990s. Rogaine is a lotion that users apply to the scalp to stop hair loss, and sometimes even regrow lost hair.

Minoxidil was initially an ingredient in the prescription high blood pressure medication, Lonetin. This drug was taken in pill form, though. An effect that surprised users and researchers was hair restoration. At first, this side-effect was great. But eventually excess hair began to grow all over the body, so the topical lotion was developed.

In 1995, Rogaine lotion gained FDA approval for treating hair loss. Although it takes weeks, even months, for users to see any results at all, many men, as well as women, report varying degrees of success with the product.

One significant downside is that Rogaine must be applied consistently. If you stop applying the lotion, Minoxidil will stop working. There’s a heavy commitment to applying the product twice a day, every day.

Propecia is Only for Men, and it Works for Most Men

Finasteride, known by its brand name of Propecia, is a new hair loss treatment that’s creating a real sensation. As happens with many other drugs, Finasteride was originally a medication used to treat a completely unrelated condition. In this case, that condition was enlarged prostate.

Once on the treatment, many men noticed hair loss slowing down, and the regrowth of hair in balding areas. And in 1997, Propecia earned its FDA approval for the treatment of androgenetic alopecia — male-pattern hair loss. This was a hair restoration dream come true.

There are a few very significant differences between Rogaine and Propecia. First is that Rogaine is topical, while Propecia is taken as a pill. Next, Rogaine can help some men and women slow down the loss of hair and regrow hair over a period of time. Propecia is only approved for men, but it works for majority of men who try it, according to WebMD.

Women should never take Propecia, as it is neither approved, nor safe for women.

Hair Transplants Can be Painful, but Effective

For men who haven’t had good results with topical preparations, and those who don’t want to take a prescription medication, hair transplants can offer a permanent hair restoration solution. Transplants have come a long way since their inception in the 1930s. But they are still a radical medical procedure, and there can be a lot of pain involved with recovery. The American Hair Loss Association  explains that several treatments may be required.

Typically, a transplant removes individual growing hairs from a donor site on the head, and relocates them to a part of the head where hair is being lost. In men with pattern baldness, this is a good solution. Hair around the sides and on the back of the head is much thicker, with plenty of donor sites from which to choose. In men who are losing hair evenly over the head, finding an appropriate donor site isn’t as easy.

There are many factors involved in transplants. The density of the hair, condition of the scalp, and artistry of the technician all play a role in the hair transplant result. Achieving a natural hairline takes a lot of skill, otherwise the transplant can look fake.

Laser Combs May, or May Not, Work

Although it may seem like something out of a sci-fi movie, a device called a laser comb is getting a lot of attention. But does it work for hair restoration? The answer is a resounding, “Maybe.”

Laser comb manufacturers claim that hair can respond to a particular type of phototherapy treatment by growing in thicker, and with a more vibrant color. The jury is still out on whether it can grow hair where it’s already been lost.

Watch the claims about this device. It is, indeed, FDA approved. But that means it’s safe for men to use, and doesn’t necessarily have any bearing on whether it will regrow hair.

The good news about phototherapy is that more clinical research has been performed since its inception, and more people seem to be responding to the treatment. There’s no pill or lotion to use, but the device comes with a hefty price tag. Expect to pay around $500 for a good quality model.

One thing is sure with hair loss: If you do nothing, it’s going to continue, and probably worsen. There are a number of safe treatments available, and some of them do seem to effect change. Propecia is the standout in this market, though.

It’s not every day that a medication is reported to work for the majority of men who use it. With Propecia, that’s just what you get.

eDrugstore.com sells Propecia, which has been proven effective for hair restoration in the majority of men who use it. We offer the privacy and convenience of online shopping, and your discreetly-packed shipment arrives right at your door. If you’re ready to try something that really works, see what eDrugstore.com has to offer.