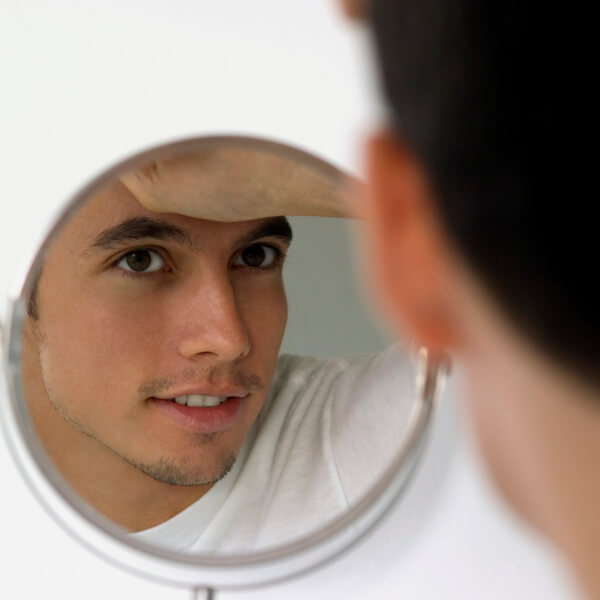 In most people, hair is in a constant state of growth. The average adult has between 100,000 and 150,000 hairs at any given time, but they are all growing toward an end, where they’ll fall out and a new hair will begin growing in its place. WebMD’s article, “Understanding Hair Loss: The Basics” explains that because of this growth cycle, most people are also in a constant state of losing hair. The loss of about 100 hairs a day is considered normal, and nothing to be concerned about. Hair is simply keratin, which is a protein. The process of hair growth happens when a hair follicle produces more and more keratin, which constantly link together. As more keratin is created in the follicle, it bonds with the old keratin and the old is pushed out. This link of keratin cells is the hair that you shampoo, and brush, and cut, and style. When you look in the mirror, every hair that you see is a contiguous string of protein cells that were once inside a hair follicle.

The hair growth cycle happens in stages. First is the anagen stage. This is where hair grows consistently over the course of several years. The growth stage varies from person to person, but the average is about 6 years. Next comes the catagen stage, which WebMd says is a transitional growth stage that can last two or three weeks. After that comes the telogen stage. This is when the hair completes is growth, and goes into a period of rest that lasts between two or three months. At any given time, some of the hair on your head is not growing at all, but preparing to be shed. After the telogen stage, the hair is shed, and a new hair begins to grow in its place. There are numerous reasons why the normal hair growth cycle might not happen in exactly the same way as it does in a textbook explanation. Anything that interrupts the cycle or causes damage to any of the components of it also interrupts the growth of hair.

The U.S. National Library of Medicine  explains that the thyroid is a gland located in the neck. Its shape is similar to that of a butterfly, with part of the gland on one side of the throat above the collarbone, and the other part on the opposite side. This gland is part of your endocrine system. It produces hormones that regulate many body functions, from your metabolism to the growth of hair on your head and all over your body. When there is a thyroid condition, the growth and life cycle of hair may be affected.

For every condition, there seems to be a medication to help remedy it. But some medications can contribute to hair loss. Some drugs might cause hair loss in one person, but not in another. This is partly determined by your sensitivity to that drug. WebMD’s article, “Drug-Induced Hair Loss,” lists a host of medications that could be to blame for thinning hair. One of the most common is the cancer treatment drug generally referred to as chemotherapy. There are different chemo drugs, and many, if not most, can cause total loss of hair. But the hair usually returns after treatment is completed. Some of the chemo medications that cause the loss of hair include:

Other medications that are linked to hair loss include:

Cause #3: Stress or Emotional Shock

A sudden shock to the system does more than rattle your nerves. It can also cause you to lose some or all of your hair. This reaction doesn’t usually happen immediately; it can take weeks for the symptoms to emerge. This condition is known as “acute telogen effluvium.” The American College of Osteopathic Dermatology  says when people sometimes refer to hair coming out in handfuls, this condition is often caused by shock. The shock doesn’t have to be a physical trauma, although it could be. Other reasons may be illness, childbirth, major surgery, crash diets, and severe infections. Because of the normal life cycle of a hair, the shedding from acute telogen effluvium may come in cycles, too, happening several weeks apart.

Alopecia is a general term that refers to hair loss, but there is more than one type of alopecia. Involutional alopecia can be summed up as the normal slowing cycle of growing hair. As people age, the growth, loss, and regrowth of hair doesn’t happen on as quick or regular a schedule as it does in younger people. Hair may become thinner all over, and it might not grow as quickly as it did before. Androgenetic alopecia can affect both men and women. In men, it’s commonly called “male-pattern baldness.” It may begin with a uniformly receding hairline, and progress to create noticeable, defined pattern of hair loss. In women, this condition has the common name, “female pattern baldness,” but it’s usually an evenly distributed loss of hair over the whole head. Alopecia areata can cause patchy or even total baldness in people of any age, but mainly affects younger people. WebMD explains that in most cases, the hair loss reverses on its own in time. Alopecia universalis causes total hair loss on the entire body. The reasons for hair loss are varied, and it’s a longer list than is offered here. Some hair is lost every day, and that’s the natural order of things.

But extreme hair loss is something different. When thinning hair is troublesome, and not caused by a serious medical condition, there is a remedy that’s available to men. Propecia (and its generic equivalent finesteride), is one of the few treatments that is known to work for 90 percent of the men who take it. That’s an impressive record.

In most men, Propecia and the generic finesteride can stop the loss of existing hair, which is a plus. Even better, it can, and often does, promote the regrowth of new hair. This medication isn’t appropriate for every hair loss condition, though. You should talk with your doctor to find out if it’s right for you. eDrugstore.com sells the scientifically proven hair loss treatment, Propecia, as well as the generic equivalent, Finasteride. We offer privacy and convenience of online shopping, and your discreetly-packed shipment arrives right at your door. If you’re ready to try something that works for thinning hair, see what eDrugstore.com has to offer.