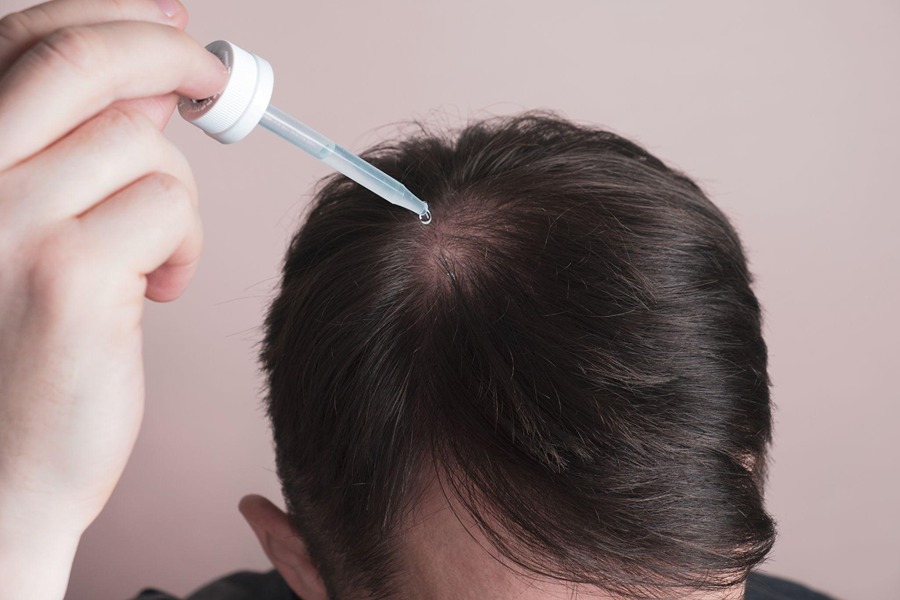 Minoxidil (brand name Rogaine) is the only FDA-approved topical solution for hair loss. But will minoxidil regrow hair? Yes it can — but only in 30-40% of users.

The rest buy the product, use it on their scalps, and are left with nothing to show for their efforts. These are the non-responders. What if there was a test that could tell you if minoxidil can regrow your hair?

Will Minoxidil Regrow Your Hair?

Minoxidil is clinically proven to be an effective treatment for male-pattern baldness. However, the treatment only produces a cosmetically acceptable result in fewer than half of users.

What’s more, minoxidil can take three to six months to work. If you are a non-responder, that’s a significant waste of time and money.

Now, you can perform a minoxidil response test to find out in a few days whether the treatment is likely to work for you.

How Does Minoxidil Work?

Science doesn’t yet understand how minoxidil works to promote hair growth. Doctors discovered its hair-growing effects by accident. They used the drug as a blood pressure medication due to its vasodilating effects and noticed increased hair growth in some patients. Researchers then developed a topical version of the drug.

Doctors suspect that minoxidil may act through multiple pathways to promote hair growth:

Topical minoxidil is available in solution and foam forms. The solution contains inactive ingredients like water, ethanol, or propylene glycol. Due to the irritation PG or alcohol may cause, minoxidil’s foam version is more popular.

In its original form, minoxidil is not active. As the skin absorbs it, it metabolizes it into minoxidil sulfate, the active form of the compound. Minoxidil sulfate is responsible for all hair-growth stimulating effects of the topical compound.

It’s possible to increase topical minoxidil absorption by boosting the formula concentration, increasing the frequency of application, or through derma rolling. Derma rolling is the process of inflicting tiny puncture wounds on the scalp by rolling a small cylinder with titanium spikes over it.

People with high sulfotransferase activity in their scalps respond well to minoxidil treatments. They can turn more of the compound into active minoxidil sulfate.

People with low sulfotransferase levels can’t activate minoxidil in their scalps. They are the non-responders.

How Does The Minoxidil Response Test Work?

If they measure the amount of sulfotransferase in the scalp, doctors can determine if a patient will respond to minoxidil treatment. And it is possible to assess sulfotransferase activity through a method called colorimetric assay.

Colorimetric assays use substances that change their color in the presence of the compound doctors want to detect.

For a minoxidil response test, doctors need a sample. Patients can pluck a few hairs and hand them over for analysis. The roots of these hairs should give doctors an idea about whether they have enough sulfotransferase activity to activate minoxidil.

The accuracy of minoxidil response tests is 95.9%.

What happens if you fail the minoxidil response test? You get to save money and time by not using minoxidil, trying in vain to regrow your hair.

You Are a Non-responder. What Can You Do To Regrow Your Hair?

In case of a negative minoxidil response test, doctors can perform further tests to determine whether your sulfotransferase problem is genetic or environmental.

If the problem is genetic, your body does not produce enough of the enzyme. If it is environmental, another drug may block your normal sulfotransferase production.

Salicylic acid (aspirin) inhibits sulfotransferase activity. By discontinuing salicylic acid treatments, you may regain the ability to activate minoxidil in your hair follicles.

After you eliminate environmental factors like salicylic acid, your doctors can run the test again. If the test reveals that you respond to minoxidil, they may prescribe you the topical treatment. If you’re a nonresponder, they will prescribe alternative solutions like finasteride or Propecia.

To answer the question “will minoxidil regrow hair?,” you need to know whether you are a responder. If you are, it will regrow some of your hair, peaking after about one year of use. It will, however, continue to maintain hair even after five years.

Are you a monidil nonresponder? We can help. We carry alternative hair loss drugs like Propecia and its generic version, finasteride. We provide a free consultation with a U.S.-licensed doctor who can help you determine the best course of treatment fill your prescription.