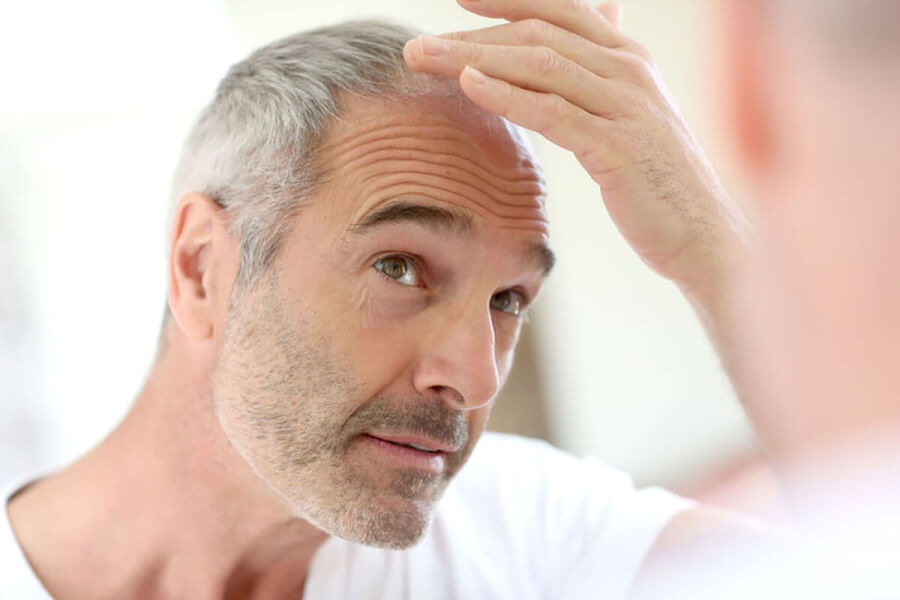 Propecia, an oral medication, begins to work as soon as you take it, reducing levels of a hormone known to impede hair growth. However, it will probably be 3 to 12 months before the drug’s hormone-lowering effects materialize in the form of new hair growth.

Men who experience male pattern hair loss have a limited number of treatment options. Propecia is the brand name of a prescription drug called finasteride, and it is used as a treatment for male pattern baldness, the most common type of hair loss.

Male pattern hair loss happens because hair follicles are susceptible to a process called androgenic miniaturization. Hair follicles shrink and eventually stop producing hair due to the conversion from ordinary testosterone to a form of testosterone called DHT. Some men’s scalp hair follicles respond to increasing levels of DHT by shrinking and producing thinner hair, until sometimes stopping hair production altogether. It affects up to 70 percent of men over their lifetimes.

Propecia works by blocking the conversion of testosterone into DHT, and in many men, this process puts a stop to male pattern hair loss. In fact, 90 percent of men taking Propecia over five years either grow new hair or do not lose more hair, while 75 percent of men taking a placebo continue to lose hair. The following table outlines the effectiveness of five years of treatment with Propecia versus placebo:

Propecia at the standard dosage of 1 mg/day starts having an effect immediately. Ultimately, it can decrease serum DHT levels by around 70 percent. Serum testosterone levels increase slightly, but within the range of what’s considered normal. During the first couple of months taking Propecia, some men experience additional hair shedding, which can be alarming. However, this is normal, and actually indicates that the Propecia is working.

Because hair growth takes time, it generally takes up to 3 months to notice a difference after taking Propecia every day. Thickening and strengthening of hairs that have become miniaturized tend to take 6 to 12 months.

What the Science Says

Due to factors like individual rates of hair growth, doctors typically tell patients taking Propecia for male pattern baldness to give the drug 6 months to a year before deciding whether it’s helping or not. The first three months or so you may not see a change (aside from the possibility of some additional hair shedding, as mentioned above).

Doctors also say that how you respond to Propecia during the first year of taking it is an indicator of how effective your long-term treatment will be. The better the results during the first year, the more likely you’ll have continued positive results over the long term. Additionally, men over 30 tend to have better hair growth long term than younger men taking Propecia.

If you read through discussion forums about Propecia, you’ll find that experiences vary significantly. Some men report that they notice a halt to additional hair loss right away, and others report taking the drug for a couple of years before having a noticeable difference in their hairline. While anecdotes aren’t data, there does seem to be a trend of men with less aggressive hair loss reporting better results while taking Propecia. Additionally, despite studies showing better effectiveness in men over 30, you’ll also have little trouble finding reports from younger men of experiencing excellent results too. Also, some men do not notice extra shedding at first and have reported almost immediate cessation of the level of shedding they had been experiencing.

Propecia’s effects are in general limited to areas of the scalp that are thinning but where there is still hair present. In areas that are completely bald, regrowth is rare. While Propecia can produce regrowth, its main benefit appears to be its ability to slow or stop male pattern hair loss. If you want optimal results, it’s generally best to start taking Propecia as soon as possible after the onset of hair loss. Even delaying for a year can prevent men from “catching up” to the results seen by men who start taking it early.

One study showed that men who took a placebo for a year experienced increased hair loss. When switched over to Propecia, they did increase hair counts but were not able to obtain the level of results seen by men who did not delay taking it. It appears that similarly to having a tooth cavity addressed early, addressing hair loss early with Propecia works better than waiting.

You Must Keep Taking It

It’s important for men to remember that Propecia is not a “cure” for baldness in the sense that you take it, regrow hair, and can then stop taking it. Propecia is a long-term drug. You generally have to take it for several months to a year to learn how well it works for you. Additionally, if you’re pleased with the results, you have to continue taking it to continue experiencing the benefits. If you stop taking the drug, you can expect for your hair loss to resume.

Propecia has worked well for many men. But taking Propecia is a long-term commitment. It takes time for results (or lack thereof) to become apparent, and results can only be maintained by continuing to take the medication. That said, Propecia has plenty of fans who are happy to have a convenient way to address a condition that many men would rather not have.

If you choose to try Propecia, don’t expect an immediate change (though you may notice less hair loss right away), and give the drug time to work based on how fast your hair normally grows, and how long you’ve noticed male pattern hair loss.

At eDrugstore.com, we’re in the business of working with licensed U.S. pharmacists to dispense medications that can make a noticeable difference in the quality of life, including Propecia and generic finasteride. We offer the convenience and discretion of quick shipping right to your door and are committed to the best possible customer experience. eDrugstore.com also uses only the most advanced technology to ensure your online privacy and security when working with us are fully protected.