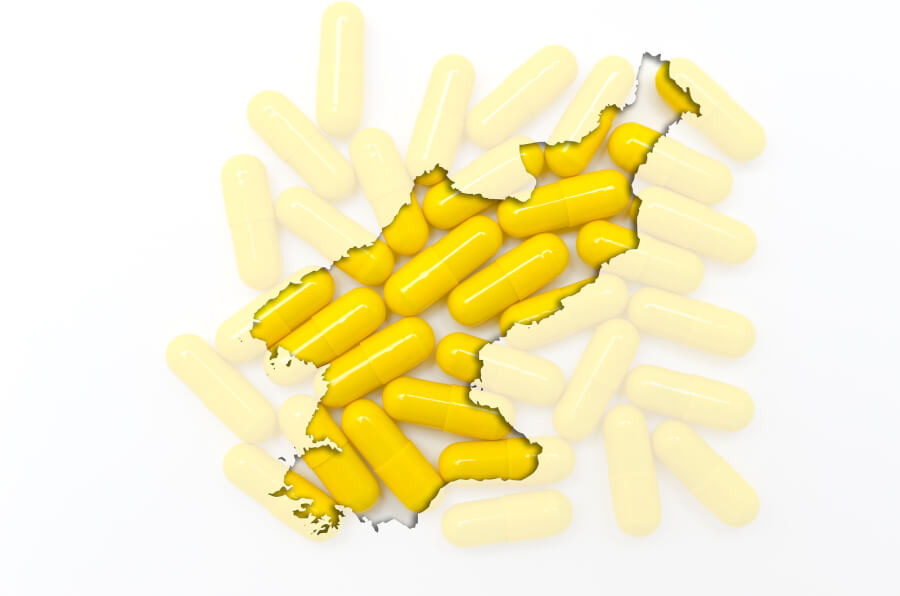 North Korea’s drug industry, symbolized here by capsules filling an outline map of the Hermit Kingdom, has thus far failed to impress the outside world with its products.

Available for at least a decade, NeoViagra-Y.R. is North Korea’s answer to Viagra and the other medications that have revolutionized the treatment of erection problems since they first appeared in the closing years of the 20th century.

As with almost everything developed within the insular confines of North Korea, it is touted as the best of its kind, far superior to Viagra and the other PDE5 inhibitors currently marketed in the West. Although this North Korean wonder drug is not available in U.S. drugstores, it is exported to China and is also marketed online.

So good is North Korea’s version of Viagra, at least according to its manufacturer, that it not only restores erectile function for up to 24 hours but also cures a host of other ills. Among the many other ailments the North Korean drug purportedly treats, according to an article posted at WashingtonPost.com, are arthritis, back pain, and hepatitis.

Before you begin feverishly searching the Internet for a website t the North Korean drug , you might consider for a moment some sage advice you’ve no doubt heard before: If it sounds too good to be true, it probably is (untrue, that is).

The drug’s manufacturer, state-owned Korea Oriental Instant Medicinal Center, is hardly content with claims of curing impotence and assorted other ills, according to an article posted at the website of the Daily Mail. The London-based media giant, which laughingly dubs the North Korean drug “Kim Jong Pill,” notes that its manufacturer also claims that it increases strength and brainpower, while also putting you into a deep sleep. As the Daily Mail quipped, it is to be hoped that the sleep-inducing and erection-boosting properties don’t kick in at the same time.

Even Good for Children?

In addition to its primary purpose of enhancing sexual function, particularly in the elderly, NeoViagra is also said by its manufacturer to build muscle, improve cognitive function, and help relieve anemia, car sickness, and fatigue. On top of all that, NeoViagra suggests that parents give one or two pills to their children each time they snack. Given the multiple claims made for the drug, the end-result of giving it to children is perhaps more than you would care to contemplate.

Informational literature from NeoViagra’s manufacturer claims that the drug takes effect within 20 minutes after it is taken and those effects “can make you last 16-24 hours in bed.” The company also claims that impotent men taking its unique super-pill have a 95 percent likelihood of achieving a successful erection strong and long-lasting enough for sexual intercourse.

A Drug for Superhumans?

Delve a bit more deeply into the claims for NeoViagra’s ability to enhance male sexual function, and you’ll begin to think that this purported wonder drug was created for men of voracious sexual appetite and unlimited staying power. The drug’s label indicates that men can have sexual intercourse three to six times within the first two hours after taking the drug and up to 10 times over the 16 to 24 hours the drug is effective.

Unhappy with the mild side effects you may have experienced after taking Viagra, Cialis, or one of the other popular PDE5 inhibitors? NeoViagra’s manufacturer promises that its drug has no side effects whatsoever.

Works for Women Too

For women who have tired of waiting for the FDA to give its final approval to flibanserin, a drug said to reignite sexual desire, NeoViagra works for women as well as men, according to the North Korean drug company that produces it.

So fantastic are the claims for NeoViagra that one is tempted to wonder whether the company’s advertising copywriter hadn’t sampled a bit of another drug for which The Hermit Kingdom has acquired a certain level of notoriety, namely methamphetamine.

Fueled by demand from methamphetamine users in nearby areas of China, illegal meth factories in North Korea have been turning out large amounts of the illicit and dangerous drug. According to an article posted on the website of International Business Times, a recent Chinese tightening of border controls may dry up one of the key markets for North Korea’s meth factories.

According to an article posted at NKNews.org, a website dedicated to presenting the latest news of North Korea, South Korean observers are somewhat amused by the claims made for NeoViagra. With tongue planted firmly in cheek, Song Jae-kyum of Korea Pharmacy Network said it appears that China’s first emperor, Qin Shi Huang, “was looking in the wrong place for the elixir of youth. If the North’s claim is true, this substance is what Qin Shi Huang was looking for to gain eternal youth.”

Song, a pharmacist by trade, told NKNews.org that there is no way to determine if NeoViagra “is safe or harmful to the body. As you know, North Korean products are not analyzed by the U.S. FDA, so there is no factual data that we can refer to, in order to analyze the substance of this drug.”

Although Song  has never tried NeoViagra, he says that some of his friends claimed to have used it and reported that they experienced longer-lasting erections after taking the drug. However, Song isn’t putting too much confidence in these anecdotal reports about the drug. “I am not entirely sure whether it was really due to the substance in the drug or just a simple placebo effect,” he said.

According to Song, NeoViagra is advertised in North Korea as “sangyaek,” which is translated to mean “herbal medicine” and discloses little to narrow down the ingredients in the North Korean drug. Song points out that almost all herbal remedies have some side effects, no matter how mild, which makes the claims for NeoViagra all the more difficult to believe.

DailyNK.com, a Seoul-based website dedicated to the eventual unification of North and South Korea under a democratically elected government, quotes a Chinese merchant who has regular dealings with North Korea. He says he’s talked to some users of the drug who agree with advertised claims that the drug has no side effects. In fact, he says they tell him the drug has no effects at all.

Almost a decade ago, Chinese merchants who deal regularly with North Korea drew up a list of the North Korean exports they felt were the very worst in quality. NeoViagra shared top honors on the worst export list with another North Korean drug called Tetrodocain. The latter was marketed as an antidote for addiction to a variety of narcotics and other illegal drugs, including opium, morphine, and cocaine. Chinese who experimented with the drug found that beyond a limited amount of pain relief Tetrodocain did nothing to help drug addicts break the habit.

The long and short of it is, buying Viagra “alternatives,” whatever their provenance, is risky. At best you will lose money. At worst, you could cause yourself serious health problems.

eDrugstore.com is a U.S.-based medical facilitator that makes it easy to order Viagra, Cialis, and their FDA-approved generic counterparts online, with outstanding convenience and customer service. Visit eDrugstore.com today if you want to start your order.