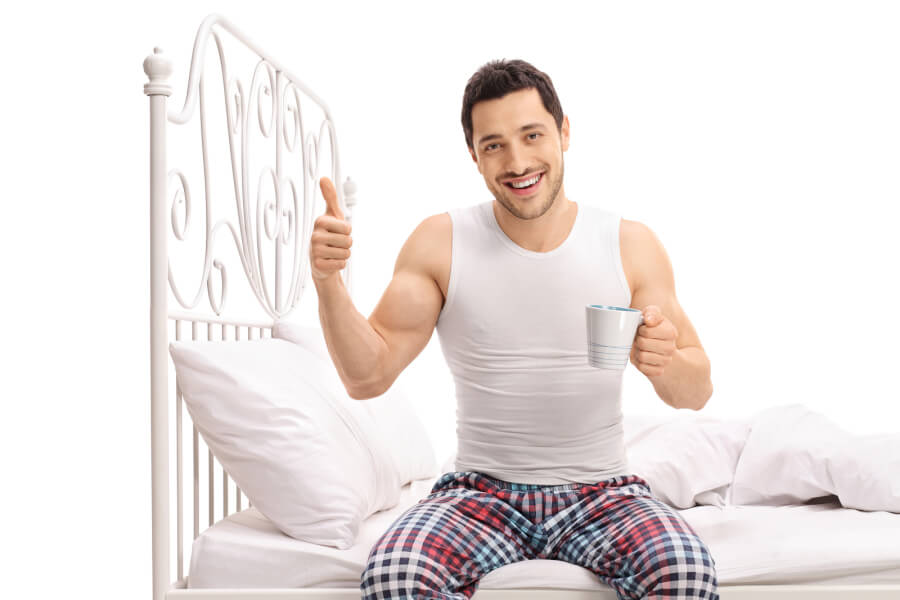 The absence of morning erections, a normal phenomenon in men, is a fairly accurate indicator that erectile dysfunction is caused by insufficient blood flow to the penis. With this information, doctors can then treat the problem appropriately.

Morning erections affect men of all ages, as well as boys, and even male babies in utero.

Absence of erections upon waking in the morning is one indication that a man may have erectile dysfunction (ED). In fact, the presence or absence of morning erections is one way urologists are able to determine the cause of ED. If a man suspects he has ED and does not experience morning erections, it’s more likely his erectile problems are caused by inadequate blood circulation and that he may benefit from Viagra or other ED medications.

Conversely, if a man believes he has ED, yet experiences morning (or nocturnal) erections, it can indicate that his erectile problems may be attributable to psychological rather than circulatory problems. There are actually thin pieces of film (snap gauges) men can attach to their penis at night to determine whether nocturnal erections occur. The film tears under stress, so if a man wakes to find the film torn, he can conclude he experiences nocturnal erections.

Erections present upon waking up in the morning, as well as those that occur during sleep, are associated with rapid eye movement (REM) sleep. During REM sleep, the brain reduces certain neurotransmitters in the brain to stop people from acting out dreams. Norepinephrine is one such neurotransmitter, and it’s also involved with the control of erections. When there’s lots of norepinephrine, blood vessels in the penis constrict, so erections are less likely.

During REM sleep, not only does norepinephrine decrease, but there’s more testosterone activity. This results in increased blood flow to the penis, with the result being an erection. Night-time and morning erections are merely a sign of the body maintaining oxygenation and repair systems. They also have to do with parasympathetic nerves that trigger tissues to become engorged. Since the final REM period tends to happen right before awakening, waking up with an erection is common.

There are any number of reasons why a man may not experience morning erections. Some are perfectly normal, while others indicate the possibility of a physiological problem. Younger boys, whose bodies are not fully capable of producing erections may not have them, but they become increasingly common later in puberty and in adulthood. A man may not wake up with an erection if he’s not awakening from REM sleep. Awakening from lighter sleep stages is less likely to be associated with morning erections.

However, lack of morning erections may be an indicator of ED. If REM sleep is occurring normally, yet a man doesn’t experience morning erections, it could indicate impaired blood flow, which is the leading cause of ED. A diagnosis of ED, however, depends on other considerations, such as difficulty having an erection during sexual activity.

Do Men with ED Get Morning Erections?

Erectile dysfunction is a fairly broad condition. While it is most likely to be associated with a decrease in blood flow to the penis, it also can be caused by other conditions, such as psychological stress or trauma. A man whose ED is caused by psychological issues may still experience morning erections, even though he has difficulty with erections during sexual activity.

Men whose ED is caused by impaired blood flow are less likely to experience morning erections. The presence or absence of them depends somewhat on how severe the ED is and how long a man has experienced it.

Fortunately, doctors know more than ever about the causes of ED and how to treat them, whether the cause is circulatory or psychological. In other words, there’s every reason for a man experiencing erection difficulties to speak with a doctor about it, because many men can be effectively treated for it.

Drugs for ED, such as Viagra, Cialis, Levitra, and others, can have an effect on morning erections. Different ED medications have different half-lives, so they stay around in the body for differing time periods. For example, Viagra’s effects last for around four to six hours, while Cialis can be effective for up to 36 hours. So depending on when the drug is taken, it can result in morning erections. The only way to determine how it will affect you is through experience. Whether or not an ED medication causes morning erections is not necessarily indicative of whether the drugs are effective overall in treating ED.

It’s important to note that simply taking a PDE5 inhibitor in and of itself doesn’t cause erections. Rather, the PDE5 inhibitors make it so that when there is sexual stimulation, blood can flow more readily to the penis and make getting an erection easier. If you think this type of drug could have uses for things other than ED, you’re right. PDE5 inhibitors are being studied for conditions as different as altitude sickness and benign lymphatic tumors in children. PDE5 inhibitors are very effective and proving to be versatile as well.

Erections are affected by a number of bodily systems, including the nervous system, the sleep cycle, hormone levels, and the general circulatory system. Morning erections are common in men of all ages. However, ED caused by impaired circulation can result in a lack of morning erections. If your morning erection pattern has changed, maybe it’s time to talk to your doctor.

If your doctor has prescribed Viagra or another oral ED drug for you and you would like to order it online, longtime online facilitator eDrugstore.com can fill all your needs. In business since the late 1990s, eDrugstore sells only FDA-approved medications sourced exclusively from licensed U.S. pharmacies. If you don’t yet have a prescription, eDrugstore can also set up a complimentary online consultation with a licensed U.S. physician who can authorize a prescription if necessary. To learn more, visit eDrugstore’s Erection Problems page.