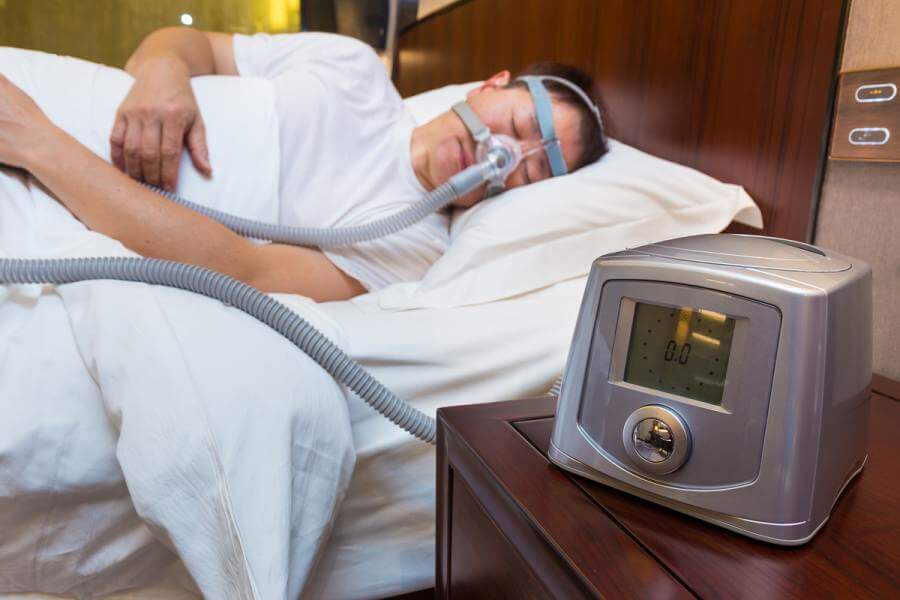 Using Your CPAP Could Help with Erection Health

Taking positive steps to address the adverse effects of sleep apnea can also help to prevent the development of erectile dysfunction. For more extreme cases of apnea, continuous positive airway pressure is the ideal solution.

Among milder cases of sleep apnea, lifestyle changes may be sufficient to blunt the adverse effects of the sleep disorder. However, in more advanced cases, the use of breathing devices that deliver positive airway pressure during sleeping hours is prescribed.

The best known of these therapies is the CPAP device, which, as its acronym suggests, provides continuous positive airway pressure throughout the night. It consists of a mask that covers the apnea patient’s nose and mouth. The mask is connected by tubing to a bedside machine that actually generates the necessary airway pressure. This device provides one continuous level of air pressure to the patient’s upper airway during sleeping hours.

A variation on CPAP is known as BiPAP, so-called because it delivers two varying levels of pressure to the upper airway throughout the night. The BiPAP device sends higher pressure when the sleeping patient inhales and slightly lower pressure when the patient exhales.

What Is Sleep Apnea?

A potentially serious sleep disorder, sleep apnea is characterized by stops and starts in breathing during sleep, according to MayoClinic.org. By far the most common form of sleep apnea is the obstructive form, which occurs when the muscles of the throat periodically relax, thus temporarily obstructing the upper airway. A common symptom of obstructive sleep apnea is snoring.

Although these common symptoms can be alarming enough, some symptoms are serious enough to warrant seeking prompt medical attention. Those include intrusive snoring, loud enough to wake up a patient or others; sudden awakening with extreme gasping or choking; intermittent pauses in breathing during sleep; and falling asleep during the day.

Because apnea is characterized by intermittent pauses in breathing, the body’s blood oxygen levels may drop during such intervals. This can cause a brief increase in blood pressure and put a strain on your overall cardiovascular function. Many with OSA go on to develop permanently high blood pressure, which increases the risk of both heart attack and stroke.

Sleep apnea also increases the risk of arrhythmias, or abnormal heart rhythms. In apnea sufferers who also suffer from heart disease, multiple episodes of arrhythmia can lead to sudden cardiac arrest, which is almost always fatal. 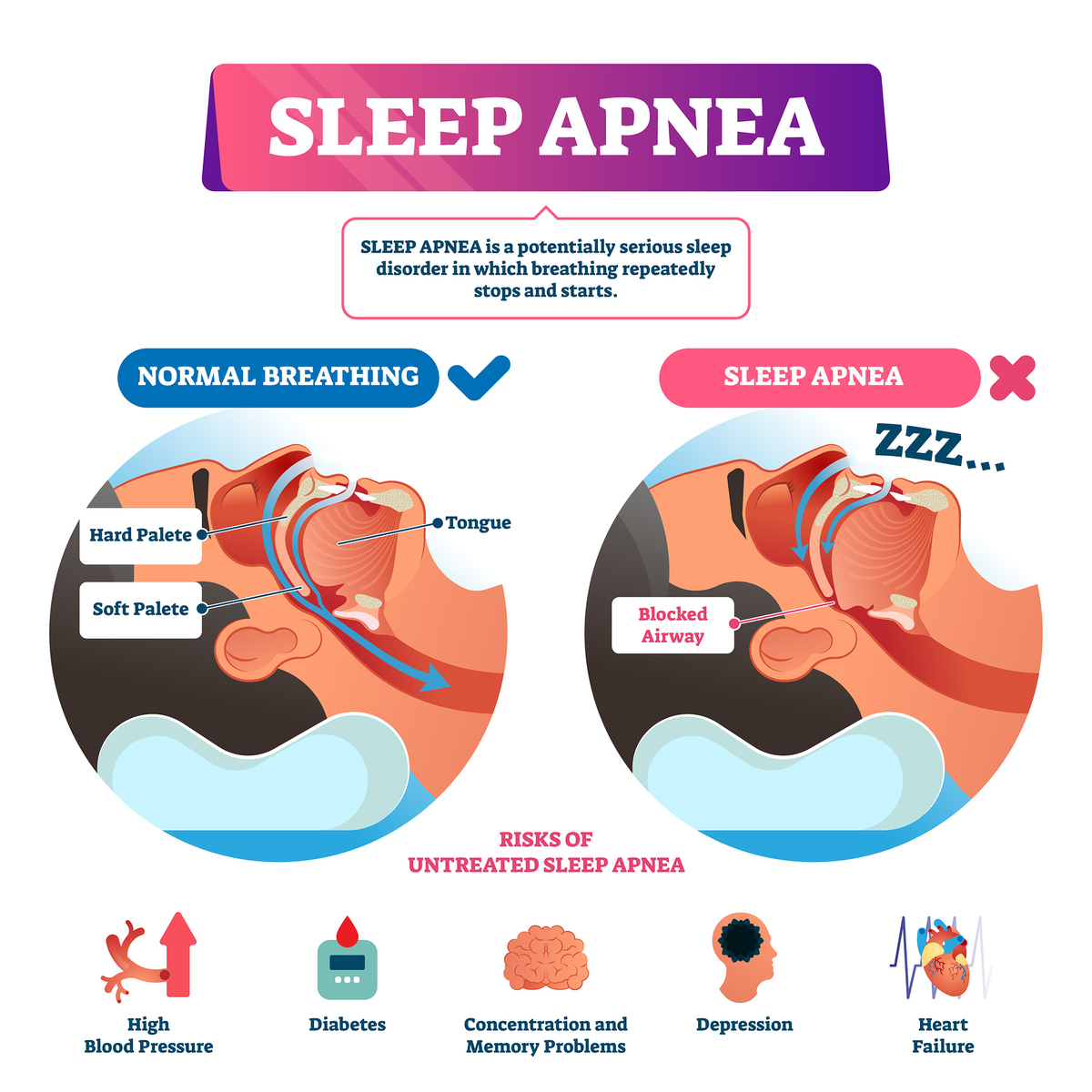 More than just a clever aphorism, the observation that what’s good for the heart is good for the penis, or vice versa, is a view widely held by medical professionals. To ensure normal function, both the heart and the penis depend on a robust flow of oxygen-rich blood. Anything that interferes with blood flow can have seriously adverse effects on cardiac health as well as erectile function.

Because of the potentially damaging effects of sleep apnea on cardiovascular health, failure to address the sleep disorder can also be damaging to male sexual function.

While the use of continuous airway pressure devices is recommended for sleep apnea sufferers with advanced symptoms of sleep disorder, some lifestyle and behavioral changes can help to reverse mild cases of sleep apnea.

Maintaining a healthy weight can go a long way toward minimizing or eliminating mild cases of sleep apnea, according to Cedars-Sinai.org. This can be especially helpful for those who carry some of their extra weight around their jaw and neck. Extra fat in those areas puts extra pressure on the airway and/or the tongue.

Avoiding alcohol is also a good idea for those with persistent symptoms of sleep apnea. Alcohol’s effect on the central nervous system causes the muscles of the upper airway and throat to relax, thus leading to sleep apnea.

For those who are smoking, kicking the habit can lead to significant improvements in respiratory function, which in turn tend to reverse mild symptoms of the sleep disorder. On top of that, smoking takes a heavy toll on blood vessels and lungs. If you quit smoking, the damage that’s been done almost immediately begins to repair itself.

As previously noted, men with sleep apnea face a sharply higher risk of ED than men with no symptoms of the sleep disorder. However, multiple studies have found that the use of positive airway pressure devices can go a long way toward mitigating any damage caused by apnea.

One study, in particular, looked at the effects of positive airway pressure therapy on both apnea and ED caused by sleep disorder. The study, conducted by researchers at Turkey’s Istanbul Education and Research Hospital, was published in the March-April 2010 issue of the International Journal of Impotence Research.

The researchers found that men treated with CPAP therapy showed significant improvements in erectile function, as measured by the self-administered International Index of Erectile Function questionnaire.

CPAP and ED Drugs Together

A team of researchers affiliated with China’s Shandong University explored the effects of treating sleep apnea patients with ED with positive airway pressure therapy, oral ED medications, or a combination of the two. The team’s findings were published in the December 2019 issue of Sleep Medicine Reviews.

While some improvements were observed in patients who were treated with either positive airway pressure therapy or oral ED drugs, combination therapy was found superior to treatment with only one of the two therapies. Researchers based their findings on results from patient-administered IIEF questionnaires.

Men who suspect their ED symptoms may be caused by sleep apnea should consult their doctors to see if treatment specific to the sleep disorder is indicated. However, they can also take steps to overcome their ED symptoms by taking Viagra or another one of the oral ED medications known as PDE5 inhibitors.

Many men have found that ordering their ED drugs online from eDrugstore.com saves them both time and money. The prices at eDrugstore include not just the ED drugs themselves but a handful of other added-value services as well.

By ordering online, you’ll avoid driving to and from the pharmacy to get your prescription filled and waiting while the pharmacist does his job. You don’t yet have a prescription? No problem. The complimentary online consultation service at eDrugstore will match you up with a physician licensed to practice in your state. If you are determined to be an appropriate candidate for the drug, a prescription will be authorized.

Shipping is free, and a complimentary pill-splitter is enclosed with all first orders, which are filled promptly and packaged discreetly. To learn more, visit eDrugstore’s Erectile Dysfunction page.