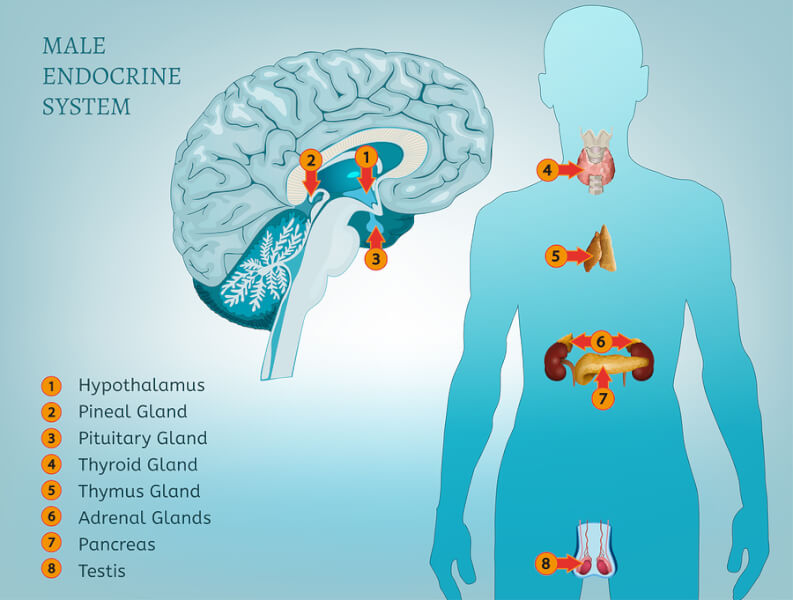 You don’t really hear too much about the endocrine system, which is a bit surprising when one considers the important role its many components play in the function of our bodies. It is only when something goes wrong with one or more parts of the endocrine system that this unsung body system manages to get our full attention.

The endocrine system is responsible for producing chemicals, known as hormones, that govern the growth and development of cells, mood, metabolism, tissue function, reproductive processes, and sexual function. Generally speaking, hormones are responsible for slower developing body processes, such as cell growth. The body’s nervous system takes charge when it comes to more rapid processes such as body movement and breathing.

The endocrine system is made up of 20-some glands, each of which is composed of a collection of cells that secrete the chemicals we know as hormones. These hormones then enter the bloodstream and flow to the part of the body they are responsible for controlling. If any one of the glands begins to malfunction, it can quickly lead to an endocrine disorder, which can also occur if the delicate balance between the body’s levels of hormones should become upset.

When it comes to sexual function, the glands most directly involved are the so-called gonads, reproductive glands that take the form of testes in men and ovaries in women. These reproductive glands produce the hormones that help to define what it is to be a man or a woman. The primary male sex hormone is testosterone. While testosterone may not play a key role in the erectile process itself, it is responsible for feelings of sexual desire, without which the erectile process probably isn’t going to kick into action.

In addition to regulating sexual desire, testosterone is also responsible for the development of male sexual characteristics. The male hormone also plays an important role in bone growth, the maintenance of muscle bulk and adequate levels of red blood cells, and also for creating a sense of well-being.

Although testosterone levels naturally decline with advancing age, usually beginning to fall after age 30, several other factors can accelerate the drop in testosterone levels. These include an injury to, or infection of, the testicles, cancer treatments with radiation or chemotherapy, excessive levels of iron in the blood, dysfunction of the pituitary gland, alcoholism, obesity, chronic illness, and stress.

If, after consultation with your primary physician, it’s determined — or theorized — that low T levels might be hampering your sexual function, the doctor may prescribe a regimen of testosterone replacement therapy that can hopefully get you back to your normal self once again. You’ll need a prescription to get one of the clinically tested drugs proven to increase T levels. Don’t waste your money buying questionable over-the-counter or “all-natural” testosterone replacements, which will do little more than empty your wallet.

Of all the endocrine disorders responsible for erection problems, the one responsible for the highest incidence of impotence is diabetes. However, as MayoClinic.com points out, erectile dysfunction is extremely common in men with diabetes, but it is not inevitable. And there are many steps that can be taken to regain erectile function if diabetes is the root cause of your problem.

While almost everyone knows someone coping with diabetes, not everyone really understands the nature of this endocrine disorder. In this case, the part of the endocrine system involved is the pancreas, the gland responsible for producing insulin, a hormone that regulates levels of sugar or glucose in the blood.

Depending on the type of diabetes involved, something goes badly wrong with the production of insulin or the way the body reacts to the hormone. In type 1 diabetes, the pancreas doesn’t produce insulin at all, and the hormone — or a synthetic equivalent thereof — must be supplied by injection in order to keep blood glucose levels in proper balance.

In type 2 diabetes, the pancreas either fails to produce adequate levels of insulin or the body is unable to effectively use the insulin that’s produced, a condition known as insulin resistance.

Over the long haul, poor blood glucose control damages not only blood vessels but nerves as well. Both nerves and blood vessels are key players in the erectile process, which helps to explain the high incidence of erection problems among diabetics.

As with any serious disease or disorder, you should seek the advice of a medical professional to learn how best to control your diabetes and find out what can be done to regain erectile function if you’ve begun to experience some symptoms of impotence. In any such discussion, be sure to tell the doctor of any other health problems you may be experiencing, the medications — prescription and over-the-counter — you’re taking, and the steps you are currently taking to control your diabetes.

Many diabetics faced with erection problems find that oral medications such as Viagra and Cialis help them to recover erectile function at least temporarily. If such drugs are inadvisable because of other health problems or possible adverse medication interactions, your doctor may suggest penile injection therapy, a vacuum constriction device, or a penile implant.

Thyroid disorders can also lead to sexual dysfunction in men, according to an article posted at WorldHealth.net. A butterfly-shaped gland in the neck, the thyroid produces hormones that help regulate blood pressure, body temperature, heart rate, and the rate at which your body converts the food you eat into the energy the body needs to function.

When the thyroid secretes less than optimal levels of thyroid hormones, it creates a disorder known as hypothyroidism, while the presence of too much thyroid hormone constitutes hyperthyroidism. Based on the findings from a 2006 research study at Italy’s University of Modena, both hypo- and hyperthyroidism increase men’s risk of developing sexual problems.

Although far less common than either diabetes or testosterone deficiency, another endocrine disorder known as hyperprolactinemia can also interfere with normal erectile function.

Located at the base of the brain, the pea-sized pituitary gland produces a hormone known as prolactin. The hormone is responsible for breast development and milk production in pregnant women. If the pituitary gland begins to produce excessive amounts of prolactin, it results in a condition known as hyperprolactinemia.

Although there is no known function for prolactin in men, the pituitary gland also produces the hormone in men, which seems to cause no real problems as long as the levels of the hormone are normal. However, when prolactin levels soar, as they do in hyperprolactinemia, the presence of so much prolactin depresses blood levels of testosterone, which can then lead to problems of sexual dysfunction we’ve already discussed.

If you are interested in ordering popular prescription medications for ED, such as Viagra, we invite you to visit eDrugstore.com.