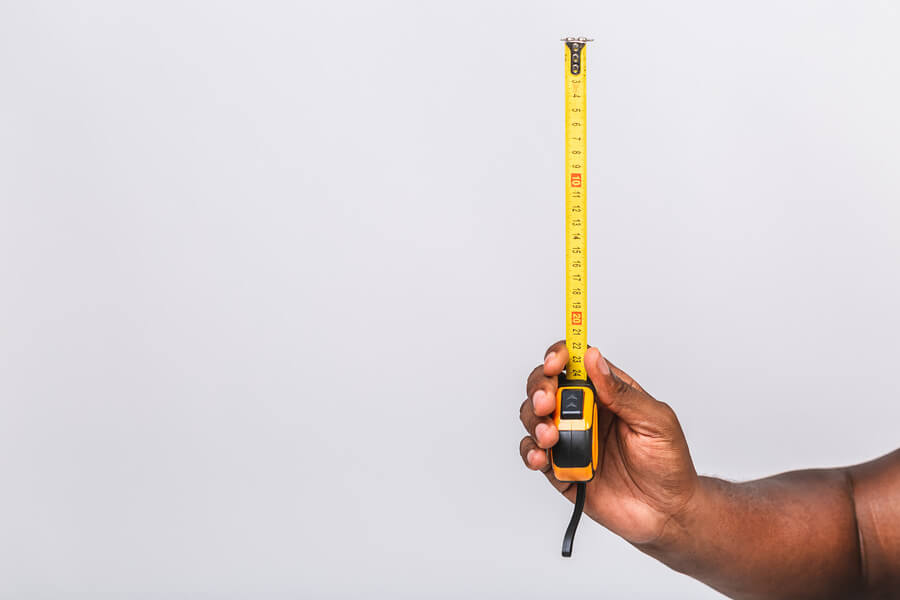 Is It Real, or All In Your Head?

Is your penis too small? If you answered yes to this question, you’re in good company.  Estimates of numbers of men who feel that way are as high as 85%. But how many have a true micropenis (an actual physical diagnosis), and how many just believe their penis is too small (often a psychological issue)? [Spoiler alert: Your penis is probably well within the normal range.]

Let’s dive into the facts.

How to Measure Your Penis

If you’re curious, here’s the correct way to measure your penis:

How Long is the Average Penis?

Despite what you might read on the internet or hear in locker rooms, the average penis is 5.1 to 5.5 inches long when erect, measured by the stretched penis length (SPL) method. Widely reported numbers saying it’s longer tend to be exaggerations based on either flawed measuring methods or self-reported numbers.

This is true of pretty much any claims you’ve heard about penises. No one group of men tends to have larger or smaller penises, statistically speaking.

Statistics are important here, as that’s how doctors generally diagnose concerns such as micropenis. Doctors use a statistical rule called the 68-95-99.7 rule. This rule says that 68% of a given population falls within the average range, that 95% are within one standard deviation of the mean, and 99.7 are within two standard deviations of the mean.

A standard deviation (SD) is just how much variation there is in a data set, where the higher the SD, the rarer it is. If you had a penis that was 5.6 inches long when erect, it would be one standard deviation from the mean, for example. This is usually expressed as a bell curve, where the average is the middle and the more extreme cases get rarer the further out you go.

Doctors expect — and have generally found — that most penises are within two SD of the average mean. Penises outside two SD are incredibly rare, statistically speaking, and that’s borne out in field data. Remember, this applies to both longer and shorter penises. Men with very long penises are just as rare as men with very short ones, a good lesson to keep in mind when we discuss small penis syndrome.

Practically speaking, this means the vast majority of men reading this do not, medically, have an abnormally small penis. The problem, of course, is that there’s a difference between medical reality and how men perceive their bodies. Penis size can be — and often is — a matter of perception.

Which brings us to small penis syndrome.

What Is Small Penis Syndrome?

Small penis syndrome (SPS), sometimes classified with body dysmorphic disorders, is the stubborn belief by the patient that their penis is unusually small compared to other men’s penises.

SPS has a number of causes, ranging from the emotional to the medical. Some men believe their penis is unusually small because of how they present when flaccid, or they experience penile shortening due to weight gain, surgery, injury, or another medical issue.

More often than not, SDS is psychological. Some men experience erectile dysfunction (ED) that’s reflected in a belief their penis is small. It also may manifest as part of a broader mental health concern, such as anxiety or depression.

It’s difficult to convince SPS sufferers that they’re normal because you’re arguing against both their own self-perception and the wider social issues surrounding penis size. There may even be tangible changes to the penis, which make the conversation even more difficult.

How Is Small Penis Syndrome Treated?

SPS has an number of treatment approaches, including:

While learning the facts alone won’t change body self-image, it helps everyone to learn the reality of their bodies. This is especially true when the exaggerations of pop culture are their only yardsticks. Some conversations with your doctor or a urologist can reassure you that your penis is perfectly normal.

Similarly, as a culture we’re often not taught body acceptance, particularly around medical concerns that may change our bodies, or even the simple passage of time. Being taught that everything that happens to our bodies is a problem can wear on our health. Learning to accept your body can help alleviate SPS, among other problems.

SPS can be an expression of a number of emotional health concerns, ranging from body dysmorphia to simple aging. Mental health care can help address these concerns. This may include partner work, work with a sex therapist, or joining a support group.

Short-term and long-term ED approaches, such as using medication and making other changes, can help address one of the underpinnings of some cases of SPS. This often interlocks with other approaches, as ED often has a lifestyle and mental health component as well.

Remember, knowing the facts about your body and being your own best advocate for your health is crucial to everyone, whether they have SPS or just questions about changes in their body over time. Follow our blog to learn more about common male health concerns, such as erectile dysfunction.

If you’re experiencing ED for any reason, we can help. Check out our medication guide, or call 1-800-467-5146 for a free medical consultation with one of our U.S.-licensed physicians. They will help you choose the right ED med for you, issue a prescription, and ship it to your door free of charge.