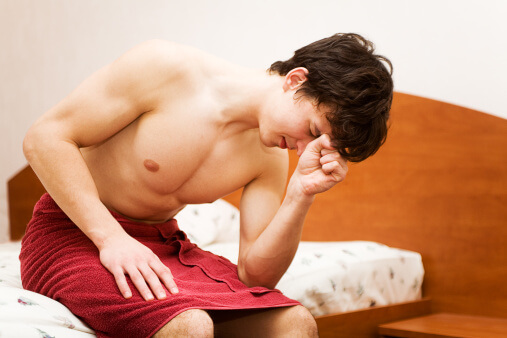 Common forms of inflammatory bowel disease include both Crohn’s disease and ulcerative colitis. An acute attack of IBD is hardly conducive to sexual activity.

Certain diseases and medical conditions carry with them an increased risk of sexual dysfunction. Men with atherosclerosis or diabetes, for instance, are more likely to experience symptoms of impotence than those who are free of those health problems.

A recent study sheds some added light on yet another fairly widespread ailment that is also accompanied by a higher risk of sexual dysfunction, according to an article posted on Healio.com’s Gastroenterology page. Based on the study’s findings, it turns out that men who suffer from inflammatory bowel disease, or IBD, are more likely than their healthy peers to develop some form of sexual dysfunction. Such dysfunction can take on many forms, including erection problems, premature ejaculation, and inability or unwillingness to engage in sexual activity.

In presenting findings from the study at a session of Digestive Disease Week 2015, Aoibhlinn O’Toole, M.D., a co-author of the study, noted that IBD symptoms, complications, and treatments all can have negative effects on sexual function, body image, and intimacy. O’Toole, a clinical fellow in medicine at Beth Israel Deaconess Medical Center in Boston, said that ¨despite the clear significance of these issues, the knowledge and extent of the impact is scant.¨

Participants in the study group researched by O’Toole and her colleagues were 156 adult men who sought services from IBD clinics at either Beth Israel Deaconess Medical Center or Brigham and Women’s Hospital in Boston. Among these test subjects, 57.7 percent had Crohn’s disease and 42.3 percent had ulcerative colitis. The mean age of study participants was 42.

Because no single existing questionnaire touches on all the topics being explored in this study, researchers tailored a customized survey that combined standard questions from the International Index of Erectile Function, or IIEF, with IBD-specific queries. The study’s survey also incorporated the full range of nine questions from the Patient Health Questionnaire, or PHQ-9, which helps to measure the severity of a patient’s depression. The end result was a hybrid questionnaire with a total of 43 queries.

Among the 156 participants in the study, 87 percent reported that they were in relationships that could involve sexual activity, and 70 percent said that they were either married or in a long-term relationship. Another 2 percent of the men in the study group said they had not been sexually active in the year preceding the survey. 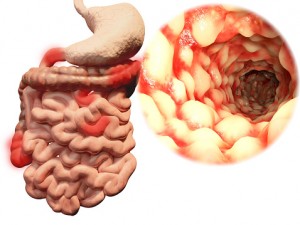 Crohn’s disease is one of the most common forms of inflammatory bowel disease.

Analysis of the data collected through the questionnaires revealed that 20 percent of the men surveyed were hesitant to start a new relationship because of their IBD, and 7.8 percent reported that their disease was in some way responsible for the breakup of a previous relationship.

The survey of IBD patients also revealed that 38 percent of the respondents said their disease affected their desire to engage in sexual activity, and 26 percent said that IBD specifically prevented them from having sex. Twenty percent of the respondents said that their disease made them feel guilty about having sex, and 18 percent reported that IBD actually caused problems during sexual activity.

Sexual problems were particularly acute among the IBD patients who were also found to be suffering from moderate to severe depression. Patients in this group reported lower levels of sexual satisfaction and also had a more difficult time in maintaining their erections.

The survey also showed that patients with Crohn’s disease who also had Harvey-Bradshaw Index scores higher than 5 had low levels of satisfaction with their sex lives, had difficulty getting an erection, and experienced poorer quality erections. Scores of 5-7 indicate mild disease; 8-16 indicates moderate disease; and anything over 16 is considered severe disease.

In an interview published in the January 2014 issue of Gastroenterology & Hepatology, Chicago-based gastroenterologist Britt Christensen, M.D., spoke about some of the unique challenges that IBD patients face regarding sexuality. She opened her remarks by noting that sexual dysfunction is a widely recognized complication of chronic illness and that IBD is one of the most widespread chronic illnesses.

IBD’s impact on sexuality is particularly hurtful, said Christensen, because most patients are diagnosed between the ages of 15 and 40. This, she said, is ¨a time when body image, formation of intimate relationships, exploration of sexual activity, and emotional security are particularly important, so patients are very vulnerable to the impact of their disease on their sexuality.¨

Among the symptoms and complications of IBD are abdominal pain, incontinence, increased frequency of bowel movements, abscesses, perianal fistulas, and skin tags. For IBD patients, said Christensen, these symptoms and complications ¨can lead to embarrassment, decreased confidence, and decreased desire. In addition, treatment of the disease with corticosteroids or surgery can result in mood changes, decreased body image, scars, and possible temporary or permanent stoma.¨ 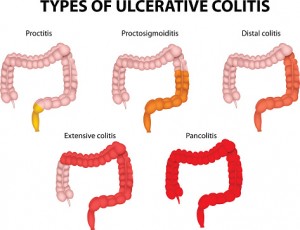 Ulcerative colitis, another common form of IBD, targets various areas of the colon, also known as the large intestine.

Christensen also pointed out that in addition to IBD’s effects on a patient’s gastrointestinal system, the disease also has systemic symptoms for many patients. Roughly 30 percent of IBD patients experience chronic pain, while nearly half of all patients have persistent fatigue, both of which ¨can affect sexual drive and performance.¨ Roughly one in every five IBD patients also suffers from arthritis, said Christensen, which can lead to reduced sexual pleasure.

The challenges facing patients with IBD are both physiologic and psychosocial, said Christensen. On the physiologic side, IBD patients can be troubled by abdominal pain, fatigue, and joint pain, problems that a gastroenterologist can more easily diagnose and treat.

However, the psychosocial challenges can be more difficult to deal with. Christensen noted that ¨depressed mood and anxiety, common in patients with IBD, impair sexual function, with depression, in particular, being the greatest independent risk factor for sexual dysfunction regardless of disease status.¨

Inflammatory bowel disease is a much more serious health condition than irritable bowel syndrome, or IBS, a disorder said to affect roughly 15 percent of all Americans. However, based on the findings from a large-scale Taiwanese study, both IBD and IBS can have negative effects on the sex lives of those who suffer from them. Among the most common symptoms of IBS are abdominal pain, constipation, and diarrhea.

Taiwanese researchers looked at two large groups of men. The first consisted of 17,500 men diagnosed with IBS. The second group included 70,000 IBS-free men in roughly the same age range as those with IBS. The results of the Taiwanese study, published in the August 2013 issue of Andrology, revealed that men with IBS were nearly three times as likely to suffer from erection problems as men who did not have IBS.

The study also noted that impotence was not the only sexual issue faced by men with IBS. Many in the IBS group reported that they experienced increased anxiety during sexual activity because of concerns that pain or an urgent need to go to the bathroom might interrupt sex.

If you have found this information helpful and would like to stay on top of the latest information and news from the consumer health front, follow eDrugstore’s blog on a regular basis.