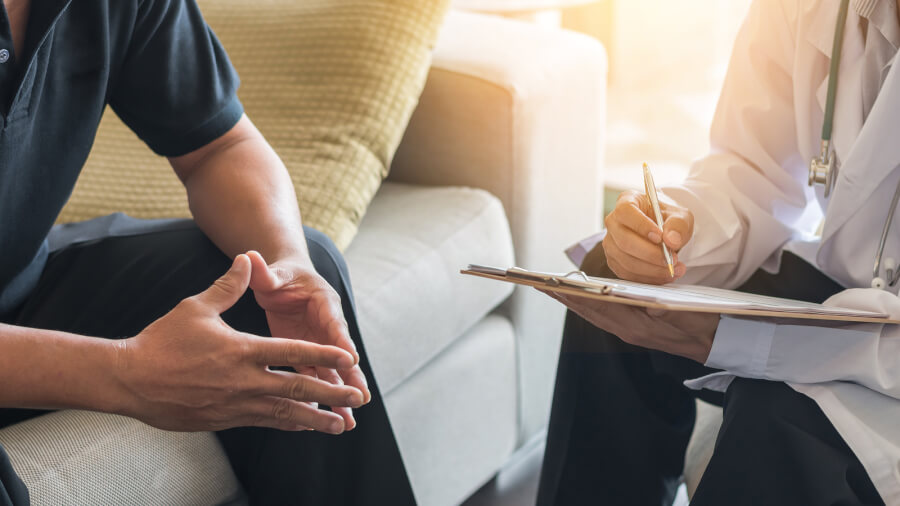 Many men with erectile dysfunction symptoms invest considerable time and energy wondering if their problems are physiological or psychological in origin. Most experts tend to believe that ED is very often a little of each. Here’s what they had to say.

Men who experience erectile dysfunction may compound the problem by overspeculation about the root of the problem. A man with ED may wonder:

Most medical experts believe that ED can have a physiological basis, a psychological basis, or both. Rare are medical experts who definitively state that ED is one or the other. The good news is that there are many excellent treatment options available for ED, so regardless of its cause, help is available. Here are five expert opinions on the physiological and psychological components of ED

1. Barbara Bartlik, MD, clinical assistant professor of psychiatry at Weill Medical College of Cornell University, and Marion Zucker Goldstein, MD, associate professor of psychiatry at the School of Medicine and Biomedical Sciences at the State University of New York at Buffalo,  emphasize that because so many cases of ED occur along with conditions like hypertension, heart disease, and diabetes, men having trouble achieving or maintaining an erection should first contact their physician for a thorough physical exam. While nobody wants to have these medical conditions, in some cases treating them and adopting a healthy lifestyle takes care of the ED as well.

For men who do not have underlying physical problems, Bartlik and Goldstein recommend getting a referral to a trained sex therapist. Sometimes physicians prescribe medications like Viagra, even if they believe the problem with sexual functioning is psychological. Erectile dysfunction can lead to a downward spiral of anxiety that only makes the problem worse, but if a man is able to take an ED drug and enjoy sexual activity once again, the cycle of anxiety can be broken. The ED medication may not be needed long term as long as the man and his partner are able to move past the issues that contribute to his performance anxiety.

Drugs Don’t Work for Everyone

2. Maneet Bhatia and Chris MacKinnon, counseling psychologists at McGill University in Montreal, are experts in male psychology, sexuality, and intimacy, and they point out that some men with ED do not experience relief with drug therapy. “For 25 percent of men with erectile dysfunction, medication can be ineffective, since their difficulties are largely psychological.” For these men, Bhatia and MacKinnon believe that sexual performance problems require that the men and their partners change their perspective on what “good sex” is.

They suggest a three-point plan for breaking the cycle of performance anxiety and restoring sexual satisfaction:

3. Dan Rutherford, the original medical director for the website NetDoctor.co.uk and general medicine practitioner in St. Andrews, Scotland, says that psychological and physical causes often overlap in cases of ED. Rutherford believes that too many doctors first recommend medication for ED and only consider psychological factors if these medications fail.

Erectile dysfunction should not be viewed as an isolated problem that can be fixed once and for all, because there are often relationship issues that go along with ED. Figuring out whether psychological issues led to ED or whether ED led to psychological issues is a “chicken or egg” situation, according to Rutherford. The important thing is that communication between a man and his partner is essential to successful ED treatment. Working with a licensed sex therapy is indicated when a couple’s communication problems compound problems with sexual functioning.

Some Rely Too Much on Drugs

4. Lisa Thomas, licensed marriage and family therapist and certified sex therapist in Greenwood Village, Colorado, believes that too many men put too much faith in medication. She states, “For most men, erectile problems are caused by an anxiety issue, not a medical issue.” Thomas believes that while ED drugs do solve the mechanical problem of attaining an erection, if a man does not address the psychological questions of why he is having the problem in the first place, he cannot take control of his own sexual response.

Thomas acknowledges that men with vascular problems or other medical problems may benefit greatly from ED drugs. But she also believes that in many cases, persistent ED is a result of dodging sexual difficulties and “hiding behind a prescription.” For couples who cannot have sex at least twice a month, Thomas recommends taking the pressure off by regularly spending time intimately without either partner pushing for sexual activity. As sexual activity picks back up, a couple can learn to handle the occasional erection problem without blame, shame, or anxiety.

5. Mehmet Oz, MD, co-creator of Sharecare.com and vice chair and professor of surgery at Columbia University, also directs the Cardiovascular Institute and Complementary Medicine Program at New York Presbyterian Hospital. In addition, Oz is an Emmy-winning host of “The Dr. Oz Show,” a nationally syndicated talk show. Dr. Oz says that physicians and counselors today are moving away from the older conventional wisdom that all ED is psychological.

The view that men have complete control over their ability to maintain an erection psychologically is becoming less popular as more research shows that physical processes unrelated to psychological health are often correlated with ED. He says on Sharecare.com, “We now know that a man can’t will his penis to an erection like a magician levitates an assistant.”

But he doesn’t dismiss psychological causes for ED altogether, pointing out that different chemical reactions in the brain can result in stress, anxiety, and depression, and that these problems are also associated with ED.

Making Sense of It All

So what is a man who is experiencing ED to make of these differing recommendations from medical and psychological experts? Is therapy the answer or is medication the answer? Until someone comes up with a definitive test that can say whether a particular person’s ED is caused primarily by physiology or psychology, men experiencing ED should allow for both possibilities.

If a man, with the help of his doctor, concludes that his ED is based on psychology or relationship issues, he does not necessarily have to forgo medications. On the contrary, many physicians believe that ED drugs can “jump start” a man’s sexual functioning and help him regain confidence while he works with a professional counselor to address psychological issues.

Thousands of men order ED medications online every day for convenience and privacy. If you are interested in trying an FDA-approved medication for ED like Viagra, Cialis, or Levitra, it’s easy to securely and safely order these drugs from the comfort of your home if you deal with a reputable online facilitator such as eDrugstore.com. To learn more, visit eDrugstore’s Erection Problems page. So what are you waiting for?