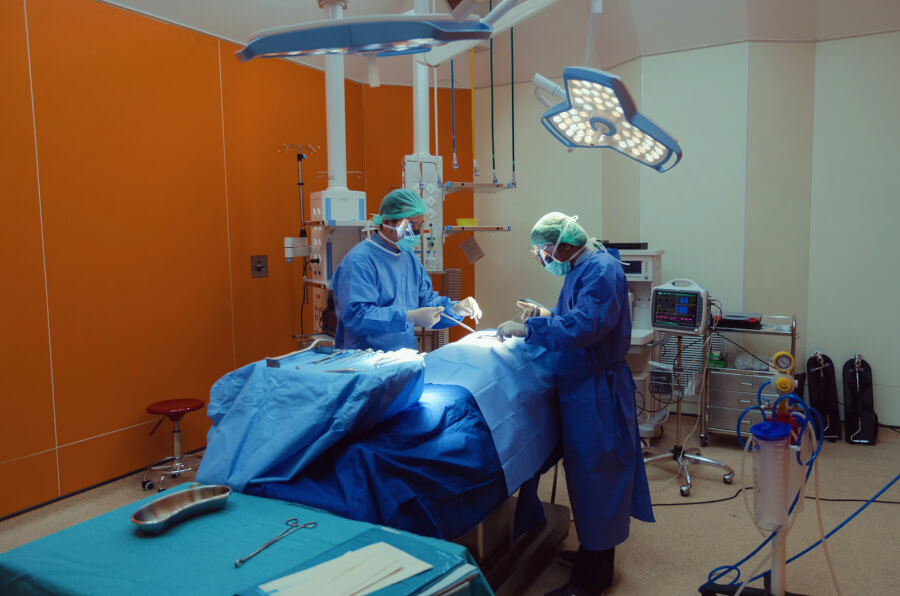 Surgery is usually a last resort for men suffering from erectile dysfunction. It can be used to implant a penile prosthesis that can be deployed or inflated on demand and also to repair vascular damage that impedes normal erectile function.

What can a man with erectile dysfunction do if he can’t take one of the several excellent prescription drugs for ED, and the other available ED therapies (vacuum pumps, injections, hormones) don’t work? If all else fails, there are surgical solutions, such as the implantation of a penile prosthesis or, less commonly, vascular (blood vessel) surgery.

Surgery designed specifically to treat ED has only been widely accepted for a little over half a century. Before 1960, ED was considered chiefly a psychiatric disorder, and urological treatments for the condition were rare. These days, thank goodness (or thank research), medical science has a much better understanding of the physiological factors governing a man’s ability or lack of ability to get an erection.

Let’s take a look at the surgical choices available for guys with ED.

Penile implants are used not only for patients with erectile dysfunction but also for reconstruction of the penis after traumatic injury or cancer surgery. They are also used to construct male genitalia in sex-change operations. Here, of course, we’re going to explore them as a treatment for ED.

The first inflatable penile prostheses were developed in the early 1970s, but even though they became pretty popular as an ED treatment, they had an unacceptable failure rate. Their unreliability necessitated a lot of follow-up surgeries – more pain and expense for countless unfortunate fellows who just wanted a woody. Because of this, some urologists began using simpler and more reliable semi-rigid devices.

Today there are two basic categories of penile implants, or prostheses: those semi-rigid devices that are also sometimes referred to as nonhydraulic; and inflatable, also known as hydraulic. Within each of these two categories there are several different models and, of course, sizes. Here’s the scoop.

Though the semi-rigid implant was not actually the first type of prosthesis to be widely used for ED, it’s the simplest. There are a few varieties, but all of them essentially consist of two matching cylinders that are surgically implanted in the penis. With some models, the penis is basically always erect, and with others, a guy manually adjusts the position of his penis for the task at hand. The implant generally provides sufficient rigidity for penetration during intercourse.

Sometimes the term “malleable implant” is used interchangeably with “semi-rigid implant,” but not all semi-rigid devices are actually considered malleable. Some have a mechanically jointed “spine,” and others have a malleable, or bendable, one that allows a man more control over the position of his penis. Semi-rigid devices are generally recommended for patients who are very obese or have limited manual dexterity, and those who for some reason cannot tolerate abdominal hardware such as reservoir balloons.

A semi-rigid penile implant offers several advantages. The surgery is simple, with relatively few complications. It’s highly effective, with a success rate of about 80 percent. The semi-rigid rod implant is also the least expensive type available. Since there are few moving parts, the risk of mechanical failure is negligible.

That said, there are a few drawbacks, beyond the fact that it’s surgery, and any surgery carries risks. Some of the drawbacks are cosmetic and some are functional. The penis may not be as firm as it would be with a “natural” erection, and penetration can be awkward. In addition, this kind of implant doesn’t increase the width of the penis the way a normal erection does, so the erection may look a little weird.

Then there’s the fact that the mechanical implant can cause a man to have a constant boner, which may be difficult to conceal. However, as noted, some models of the semi-rigid implant are more malleable, and can be bent into proper position to be acceptable to polite society.

Other more serious problems include a risk of infection, bleeding, or excessive scarring. This is also the type of implant most likely to cause pain or even erosion through the skin. Furthermore, these implants permanently alter or may even injure normal erectile tissue, and if they are not successful, they can interfere with other types of ED treatment. Again, however, the complication rates are pretty low, and many men report satisfaction with this type of implant.

Inflatable implants consist of two cylinders that are filled with fluid by pressing a pump to make the implant hard. The cylinders are surgically inserted into the penis, and a pump is placed in the scrotum. There’s also a reservoir of fluid that is contained either within the cylinders or is placed beneath the tissue of the lower abdomen. When a man desires an erection, he squeezes the pump, which moves fluid from the reservoir into the cylinders. The cylinders expand, thus creating the erection.

There are two types of inflatable penile implants: the fully inflatable implant, and the self-contained inflatable unitary implant. Some of the fully inflatable units are two-piece devices and some have three pieces; it all depends on the location of the fluid used for inflation. The fully inflatable implant increases the width of the penis when activated and therefore gives a man a more natural look than either the self-contained inflatable device or the semi-rigid implant. But it is also the most expensive type of implant, and has a relatively high rate of mechanical failure. While today’s models are generally more reliable than their early-1970s predecessors, they are still far from perfect.

The self-contained inflatable unitary device is a paired cylinder with all operating components contained within each device. It is less expensive and the surgery required is simpler than that for the fully inflatable apparatus. However, it is sometimes difficult to activate, and it does not increase the width of the penis. And it too is prone to mechanical breakdowns, though the failure rate is generally lower than that of the fully inflatable implant.

The good news with inflatable implants is that the potentially embarrassing problem of the constant boner isn’t a concern as it is with some of those semi-rigid implants mentioned above. Inflatables of all types are more natural looking and easy to conceal. They give a man control over his state of erection, and they offer as good an imitation as possible of the natural process of penile erection and flaccidity. The success rate is high – about 70-80 percent.

Inflatable implants shouldn’t be considered permanent, but most of them remain functional for 7 to 10 years before a replacement is necessary. The companies that manufacture these implants often have lifetime warranties for the devices and their components.

Is an implant worth the risks and expense? Many men would say yes. But for some guys, another type of surgery may hold the key to solving their ED problem once and for all. Read on.

Erectile dysfunction is most often caused by problems with blood flow to the penis. Very often, these problems can be corrected with drugs that essentially improve that blood flow, such as the popular PDE5 inhibitors (Viagra, Cialis and Cialis for daily use, Levitra, Staxyn, and Stendra). However, when these don’t work, surgery on the blood vessels themselves may be an option.

The most common types of vascular surgery for ED are procedures to reconstruct the arteries within the penis, thus increasing blood flow, and surgery to block off veins within the penis, which keeps blood from leaving the penis. These surgeries can enable some men to achieve or maintain an erection.

There are distinct advantages to vascular surgery for ED, the most notable one being that if it is successful, it restores natural erections that have a normal appearance. No implant is required. And unlike implants, even if vascular surgery is not successful in restoring erectile function, it will not interfere with other ED treatments.

But there are several caveats. To begin with, few men are viable candidates for this type of surgery, and extensive testing is required to determine an individual’s suitability. These are technically difficult procedures, and currently there are very few medical centers with adequate experience in managing this type of surgery.

Moreover, for most patients vascular reconstructive surgery only has a success rate of 40 to 50 percent, and the effects rarely last more than two years. There is a relatively high relapse rate. (Frankly, the patients who have the best outcomes with this surgery are generally younger guys who have ED as a result of trauma to the genitals or pelvic area, and who have only suffered damage to a single blood vessel.) And not only is it very expensive, but vascular reconstructive surgery on the penis is risky as well. Risks include formation of scar tissue that can distort the penis, painful erections, and shortening or numbing of the penis.

Perhaps in the future more advanced and refined surgical procedures will improve the success rate for men of all ages with ED, and will alleviate some of the risks and even bring the cost down. As of now, though, vascular surgery for erectile dysfunction should be considered as a treatment of last resort.

If, after careful evaluation and attempts to try other therapies such as oral meds for your ED, you and your doctor decide that you may be a candidate for ED surgery, it goes without saying that choosing the right surgeon is paramount. If your doctor is not a surgeon, he or she will probably be able to recommend a good one or ideally several from which to choose. If you consult with these surgeons they will interview you, but you need to interview them as well, as if you’re screening them for the most important job in the world (which, from your perspective, is exactly what you’re doing!).

Make sure the surgeon you choose has the proper credentials and is board-certified in an appropriate specialty. Ask how much experience he or she has in the type of surgery you are considering; obviously, you want someone who has performed many of these procedures. Check out the surgeon’s background to see about lawsuits or disciplinary actions.

You may also be able to get more information by writing to an organization such as the American Urological Association:

Needless to say, surgery is not something that should ever be undertaken lightly. It is almost never considered a first-line treatment for erectile dysfunction, but it has been a godsend for some men when all other treatments failed.

The fact remains, however, that most guys with ED will never have to go under the knife to solve their problem. Millions of men have found a solution in one of the prescription drugs for ED. Your doctor can help you determine if one is right for you. As we’ve said before and will say again: If you have ED, do whatever you need to do to take back your power. And be grateful that you are living in a time when there are more choices for ED treatment than ever.

If this article has piqued your interest and you would like to stay abreast of the latest information and news from the consumer health front, follow eDrugstore.com’s blog on a regular basis.