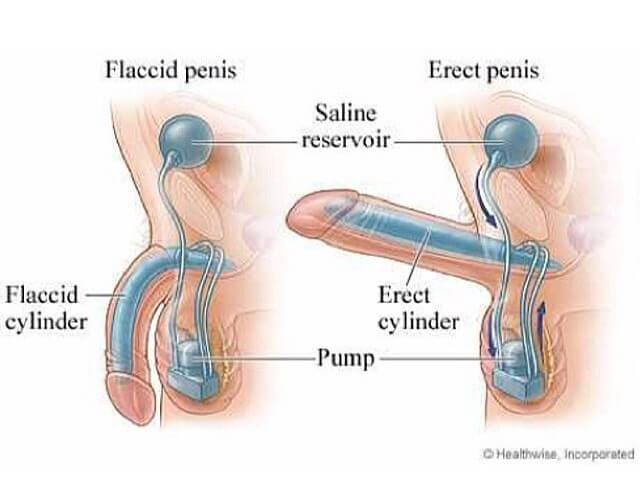 Viagra not  working for you? Don’t give up hope. There are a number of alternative treatments, including surgically implanted penile prostheses.

Since the introduction of Viagra in the late 1990s, most of the conversation about the treatment of erection problems has focused on the little blue pills and other related medications introduced in Viagra’s wake.

However, for men who find the pills don’t work that well for them or cause unpleasant side effects, there are other options available. One such solution, around in one form or another since the mid-20th century, is the penile implant. These surgically implanted devices offer on-demand erections and, according to WebMD.com, come in two basic varieties:  malleable and inflatable.

The malleable or semi-rigid implant is clearly the simpler and less sophisticated of the two types of implants. It consists of semi-rigid rods that are implanted within the twin erectile chambers of the penis, known as the corpora cavernosa. Under normal circumstances, the spongy erectile tissue within these two chambers becomes engorged with blood to create an erection. When the natural ability to achieve erection is lost, these malleable rods can be surgically placed within the corpora cavernosa, and the penis can be kept down or to the side until sexual activity is planned. It can then be lifted into the proper position for sexual intercourse.

An inflatable penile implant consists of multiple parts, including two cylindrical tubes that go into the erectile chambers of the penis. However, attached to the cylinders is a small bulb, usually implanted under the loose skin of the scrotum, and a larger reservoir of saline solution that is usually implanted under the muscles of the groin. All components are connected by thin tubing. When an erection is desired, the process can be set in motion by squeezing the bulb in the scrotum, which begins pumping fluid from the reservoir into the twin cylinders implanted within the penis itself. As these cylinders fill, the penis becomes erect. After sexual activity is completed, squeezing the scrotal bulb begins the process of draining the fluid out of the penis and back into the reservoir.

In a review of Medicare data covering nearly 1.8 million men diagnosed with erectile dysfunction, 3 percent — 53,180 men — opted for penile implants, also known as penile prostheses. The study, published in the July 2015 issue of The Journal of Sexual Medicine, noted that the percentage of men with penile implants had decreased from 4.6 percent in 2002 to 2.3 percent in 2010.

That decline in the use of penile implants was observed across all demographic factors, including age, ethnicity, and geographic location. While the use of penile prostheses underwent an overall decline, as noted above, their use actually increased in men who suffered not only from impotence but other serious illnesses as well.

Although penile implants might be a solution for any man with erection problems, urologist Elizabeth Kavaler, M.D., told HuffingtonPost.com that their use is most common in men who have suffered traumatic pelvic injury or have undergone prostate cancer surgery. Kavaler, who works at Lenox Hill Hospital in New York City, notes that while implants restore penile function to some degree, “it’s a completely mechanical process.” The penis with an implant can no longer respond to stimulation.

In an overview of the evolution of penile prostheses, published in the March 2015 issue of the “Korean Journal of Urology,” urologists Arthur L. Barnett and Brian Le point out that penile implants have been used as an ED treatment since the 1930s. They also represent the oldest effective treatment for impotence. In their earliest forms, these implants were of the malleable or semi-rigid type, although far more primitive in form than those available today.

Russian surgeon Nikolaj Bogoraz gets credit for developing the first such implant, which was fashioned out of rib cartilage to provide rigidity. A little more than a decade later, surgeons R.T. Bergman, H.A. Howard, and R.W. Barnes reported success with a similar implant using a rib graft. Despite these successes, implants made from organic materials were soon discontinued because they tended to break down in the wake of infection, which often occurred after surgery.

Acrylic stents were introduced in the 1950s, silicone and polyethylene rods followed in the 1960s, but the biggest advance came in the early 1970s with the first successful implantation of an inflatable penile implant. Credit for the development of the multi-component inflatable implant goes to F.B. Scott, W.E. Bradley, and G.W. Timm.

The Scott-Bradley-Timm device represented a significant advance in implant design, allowing an impotent man to have an erection only when needed. However, in its earliest forms, it was subject to a high rate of mechanical failure, ranging from 21 to 45 percent within a few years after surgical implantation.

Over the last five decades, science and medicine have worked together to improve on the design and functionality of penile implants. Those available today represent vast improvements over the early implants of the 20th century.

The decline in the popularity of penile implants, documented in The Journal of Sexual Medicine study referenced earlier, is viewed with dismay by some doctors who report that the implants have the highest rate of patient satisfaction among all ED treatments.

Darius Paduch, M.D., director of Sexual Health and Medicine at Weill Cornell Medical College in New York City, commented on the current state of penile implant use. It’s “like starting a car; you just turn it on when you’re ready,” Paduch told CNN. “The guys love it.”

Drogo Montague, M.D., director of the Center for Genitourinary Reconstruction in the Glickman Urological & Kidney Institute at the Cleveland Clinic, told CNN that penile implants and injections are routinely presented as the “second line” of treatment when Viagra or Cialis fails to work. However, he noted, that “penile prosthesis is the only thing that works for almost every man with ED — unlike injections and pills.”

Not for the faint of heart, the injections mentioned by Montague involve the injection into the base or side of the penis of a substance, such as alprostadil, that temporarily increases blood flow into the penis, thus creating an erection. Penile injection therapy usually takes effect very quickly and produces an erection that lasts for about an hour.

An alternative to these injections is the use of a tiny alprostadil suppository that is inserted into the urethral opening at the tip of the penis. Such treatment usually produces an erection within 10 minutes, and the erection lasts from 30 to 60 minutes.

If Viagra or one of the other oral ED drugs works well for you, the convenience of ordering your medications online may appeal to you. If so, you should check out the services offered by longtime online facilitator eDrugstore.com, in business since the late 1990s. To learn more, visit eDrugstore’s Erection Problems page.