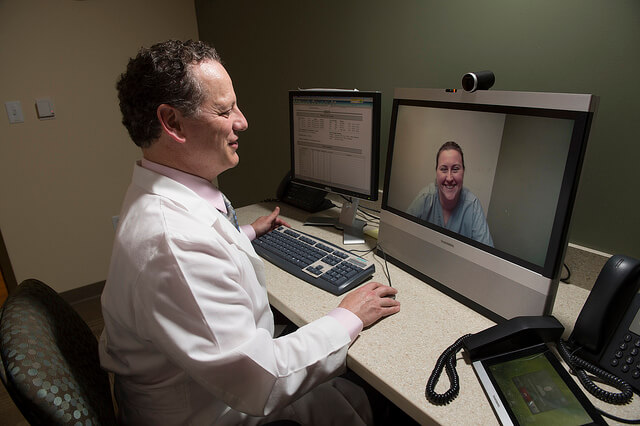 Expanding rapidly and reshaping the face of health care delivery as it grows, telemedicine offers a number of widely touted benefits. Such benefits include improved access to health care, higher quality care, and cost efficiencies that might help to rein in the runaway cost of health care.

Among its many other benefits, telemedicine now makes it possible to bring together the best in medical expertise and desperately ill or injured patients whose lives and limbs depend on getting specialized care in emergency situations.

While most reports about telemedicine focus on the larger picture, the technologies that underpin its practice are making possible small miracles for people in need across the country. In one of the more recent stories, an Arkansas man credits telemedicine for saving his hand after his home improvement project went terribly wrong.

In December 2014, Tommy Watts of Batesville severely injured his hand while using a table saw to cut a board he needed to put up his mailbox. Immediately recognizing the seriousness of his injury, he wrapped his mangled hand in a towel and had his wife drive him to the nearest hospital. Doctors there saw that Watts’ injury demanded the immediate care of a hand specialist, but none was available at the local hospital.

In fact, Arkansas has only a limited number of hand specialists, seven of whom are on call 24 hours a day under a telemedicine-enabled hand trauma app that was launched only months before Watts’ unfortunate mishap. The application, developed by the Arkansas Trauma Communications Center, allows specialists to evaluate severe hand injuries remotely using iPads and video conferencing technology.

iPads at the Ready

The seven hand specialists — four in Little Rock and three in Fayetteville — participating in the Arkansas program keep iPads with them at all times, allowing them to visually evaluate hand injuries and also review X-rays and CT scans of the injuries.

In injuries such as those sustained by Watts, time is of the essence to salvage as much as possible of the damaged blood vessels, nerves, bones, tendons, and soft tissue. The emergency doctors who were looking after Watts in Batesville put in a call to the state Trauma Communications Center, which then paged Theresa Wyrick, M.D., one of the seven hand specialists taking part in the hand trauma program.

Based in Little Rock, roughly 100 miles southwest of Batesville, Dr. Wyrick is an associate professor of hand surgery and vice chairman of the Department of Orthopedic Surgery at the University of Arkansas for Medical Sciences.

Interviewed by Alexis Rogers, a reporter for KATV in Little Rock, Dr. Wyrick said she averages six to seven telemedicine calls a month. Of her initial reaction to Watts’ injuries, she said that he had a ¨pretty significant¨ injury to the back side of his hand. She noted that he had multiple tendon injuries, some bone loss, and fractures. However, working with local doctors via the videoconferencing link, ¨we were able to repair tendons, fractures, broken bones, nail bud injuries, and those sorts of things to allow everything to still be there.¨

For Watts, having Dr. Wyrick available to evaluate his injuries and advise on the steps necessary to stabilize his injured hand was nothing short of miraculous. He told the KATV reporter: ¨I think God sent me to her that day. It gave me hope. She was like an angel because . . . I was laying there wondering what was going to happen. She felt confident and sounded confident.¨

According to Dr. Wyrick, once she’s been called in to consult remotely on a case such as that of Watts, it takes roughly 30 minutes to figure out exactly what needs to be done, a vast improvement over the way things used to be. ¨Before this system was in place,¨ said Dr. Wyrick, ¨it would take two or three hours to get in touch with the right person to figure out where they need[ed] to go.¨

For Arkansans, telemedicine is revolutionizing the delivery of health care across the state, Dr. Wyrick said. Using the new systems enabled by telemedicine, specialists can reach out to patients remotely and provide the kind of care that is not otherwise available to those patients at the local level.

For Tommy Watts, the experience has been life changing. As he told the KATV reporter, ¨Thanks to Dr. Wyrick, I’ve got my hand.¨

Watts’ story is just one of the many cases in which telemedicine has provided specialized care to patients in remote or rural settings. In some cases, telemedicine has literally saved lives.

One such example is the case of MaLea Fox, a 7-month-old who woke up one morning in June 2011 with a fever of 102.4. Unable to get in touch with MaLea’s pediatrician, the infant’s mother rushed her to a hospital in Seaside, Oregon. After conducting a series of tests and blood work, doctors there determined that MaLea had a fever. The child was released to her mother who took her home for a nap.

Four hours later, MaLea’s mother had a hard time waking the infant from her nap. She also noted a bruise-like rash on MaLea’s lower abdomen, so she took the child to yet another nearby hospital. Sensing the gravity of the child’s illness, the attending ER physician at Columbia Memorial Hospital in Astoria called for a telemedicine consultation with Oregon Health & Science University in Portland, 95 miles to the southeast of Astoria.

Jennifer Needle, M.D., a pediatric intensivist at OHSU, got the call to examine MaLea via a two-way communications system that consists of a computer-like workstation at Dr. Needle’s end and a robot-like device at the patient’s end. Using the multiple capabilities of the robot-like device to examine MaLea and evaluate her symptoms, Dr. Needle determined that the infant was suffering from meningococcemia, a life-threatening bacterial infection. She persuaded MaLea’s mother to approve the insertion of a breathing tube into the child before the infant was airlifted by helicopter to Portland.

Because of the delays experienced in getting MaLea to Portland, that breathing tube very likely saved her life. Fog forced the helicopter pilot to turn back midway through the flight. Returning to Astoria, MaLea was transferred to a fixed-wing aircraft and was finally able to reach OHSU in Portland six hours after she originally set out.

Desperately ill with a fast-moving infection, MaLea spent the next 111 days at the hospital in Portland. Although both of the infant’s legs had to be amputated above the knee and she also suffered extensive nerve and muscle damage to her right arm, she survived this devastating illness and is alive today, largely thanks to the OHSU telemedicine system.

Despite everything her child has been through, MaLea’s mother has nothing but praise for telemedicine. ¨I think it’s the greatest thing ever invented. I don’t think she’d be alive if not for that.¨