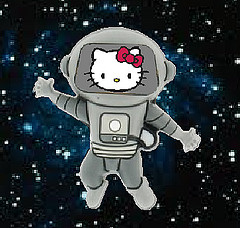 Photographs of Lauren’s exploits were released along with a YouTube video.

A Hello Kitty doll has become the first ever adorable cat mascot to reach the stratosphere.

Lauren Rojas, a seventh grader in Antioch, California used a balloon kit to send Hello Kitty into near-space for her school’s science fair. The kit was equipped with instruments to test the effects of altitude on air pressure and temperature.

The feline flying machine was also outfitted with several cameras, to chronicle the doll’s journey. The video of Hello Kitty’s dizzying voyage was eventually uploaded to Youtube, where it has racked up over 560,000 views, and become something of a viral hit.

Lauren and her father, Rod Rojas, reached out to a company out of Colorado called High Altitude Science to help them pull off Hello Kitty’s space adventure. The company helped Lauren to equip her balloon with a flight computer, so the doll’s progress could be accurately tracked.

After preparing the balloon, Lauren and her father decided to attach a small camera to the ship so they could watch Hello Kitty’s journey. Ultimately, the balloon reached an altitude of 93,625 feet (17.73 miles), before the balloon expanded to 53 times it’s original size and popped, sending Hello Kitty plummeting back down to Earth. The ship landed in a tree fifty feet up 47 miles from the launch site, and Hello Kitty was still on one piece.

The experiment was a rousing success, and has made Lauren something of a local celebrity 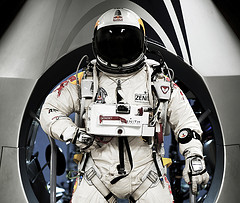 Although no one needed a spacesuit for Lauren’s doll flight, it was quite advanced for a school science fair.

around her small school. But her project will still have to compete against her peers, and if she wins, she will head on to the regional science fair later this year.

Lauren isn’t the only one getting accolades for the experiment. Lauren’s brave Hello Kitty doll joins the prestigious league of toys that have been in space, along with a Lego figure launched by two teenagers that reached 80,000 feet, and bobbleheads of Barack Obama and Mitt Romney launched by a group of school children before the 2012 election.