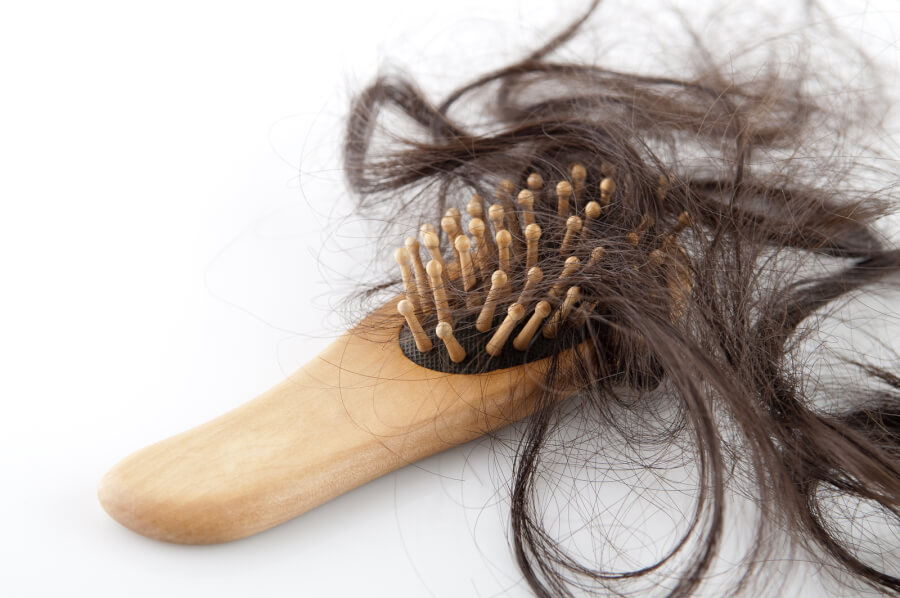 As unwelcome as signs of balding are to most men, hair loss for women can truly be devastating. While some men still manage to look quite attractive with the bald look, it’s unlikely that it’s ever going to catch on as a trendy look for the fair sex.

All of which raises the question of what causes hair loss among women, who somewhat surprisingly account for about 40 percent of all hair loss in America, according to the American Hair Loss Association.

Despite the widespread incidence of female hair loss, the medical community devotes little attention — or sympathy — to the issue, according to AHLA, essentially telling female patients that it’s a problem they will simply have to live with.

As to the causes of female hair loss, by far the most common form of hair loss among both men and women is androgenetic alopecia, which is also called male and female pattern balding. The primary culprit in this form of hair loss is a substance called dihydrotestosterone, or DHT, a derivative of testosterone, the primary male sex hormone, which is present in widely varying amounts in both men and women.

While DHT is the proximate cause of hair loss, conversion of testosterone into the dreaded DHT is facilitated by the Type II 5-alpha reductase enzyme that dwells in the oil glands of hair follicles. According to AHLA, science has determined that “it’s not the amount of circulating testosterone that’s the problem but the level of DHT binding to receptors in scalp follicles.”

Once DHT makes it to the hair follicle, it begins to shrink the follicle until eventually the follicle can no longer support hair growth. Although women have far less testosterone in their bodies than men, the conversion of the male sex hormone into DHT happens in both sexes. As testosterone levels rise, DHT becomes even more of a problem, causing the loss of even more hair. Depending on an individual’s body chemistry, she or he may be super-sensitive to DHT, which can also accelerate the hair loss process in the presence of only minimal DHT.

Whether you fall victim to androgenetic alopecia or not depends to a large extent on your genetic makeup. Contrary to popular belief, the balding or hair loss gene can come from either the maternal or paternal side of your family. What is actually inherited is a genetic predisposition to the sort of hormonal imbalances that can accelerate DHT production and eventually cause hair loss.

Among the multiple causes of female hair loss, second only to genetics is stress, including the extreme form of stress induced by trauma. Stress tends to increase testosterone levels, which in turn ramp up DHT production. In addition to its effects on DHT production, stress can significantly reduce blood flow to the capillaries, the small blood vessels that carry nutrients and oxygen to the hair follicles. And hair follicles that aren’t being adequately supplied with these essential needs soon become unhealthy and unable to sustain hair growth.

Good Nutrition a Must

As with most aspects of your health, eating a healthy diet is essential to the maintenance of optimal hair health. Some of the nutritional pitfalls that can lead to hair loss include sudden and rapid weight loss, high consumption of animal fats, and inadequate intake of foods containing biotin, iron, protein, and zinc, nutrients essential to hair health.

Women suffering from certain thyroid disorders are likely to experience hair loss, which can also be caused by some of the drugs used to treat thyroid diseases. And a variety of other drugs can cause hair loss as well. Medications known to cause temporary or permanent hair loss include chemotherapeutic drugs, steroids, some birth control pills, and some drugs used to treat diabetes, heart disease, and high blood pressure.

Pollutants in the air and water, along with exposure to chlorine, can trigger hormonal imbalances that cause an uptick in DHT production. Additionally, overexposure to ultraviolet light can accelerate the aging process of scalp cells, ultimately causing damage to hair shafts.

Certain life events, including the unavoidable aging process, can cause hair loss in women. Other life events that have a negative effect on hair include pregnancy and menopause, both of which cause hormonal changes that can lead to temporary hair loss.

In light of these many potential causes of hair loss, the question of what can be done to combat hair loss inevitably arises. Sadly, there’s less help available for women than there is for men.

Obviously, where certain lifestyle decisions appear to be contributing to hair loss, steps can be taken to reduce those risks. Cutting down on your time in the sun, switching to medications less likely to cause hair loss, and eating a healthy diet are all positive measures that can help you hold on to the hair you have.

If, however, your hair loss is caused primarily by genetic factors, you’ll need to do more than make some lifestyle changes. Of the two main drugs — minoxidil and finasteride — prescribed to combat men’s hair loss, only the former is recommended for use by women. It should be noted, however, that some physicians do prescribe finasteride, although it must be considered an off-label use.

Minoxidil, also marketed under the brand names of Rogaine and Ronoxidil, is a topical solution to be applied directly to the scalp. Paradi Mirmirani, M.D., with Permanente Medical Group in Vallejo, California, tells WebMD.com that minoxidil not only stops individual hairs from growing thinner but can also help women regrow hair on the top of their heads. “Very good studies show that it’s effective and gets the hair root or follicle to become larger,” says Dr. Mirmirani.

Despite encouraging reports of minoxidil’s positive results for some women, it doesn’t work for everyone. According to Dr. Mirmirani, about half the women using it experience eventual hair regrowth, while another 40 percent manage only to slow or halt hair loss. The only way to find out how well it works is to try it. The topical solution is to be applied to the scalp twice daily. It can take 12 weeks or so before hair regrowth is achieved.

Finasteride, also sold under the brand names Propecia and Proscar, is an oral medication designed primarily for use by men but sometimes prescribed for women by their doctors. Women who are pregnant or may become pregnant should not use finasteride because it can cause birth defects in male children. For this reason, most doctors won’t prescribe it for women who have not yet undergone menopause.

Finasteride works its magic by blocking the effects of the Type II 5-alpha reductase, which facilitates the conversion of testosterone into DHT, which in turn leads to the miniaturization of hair follicles and eventual hair loss.