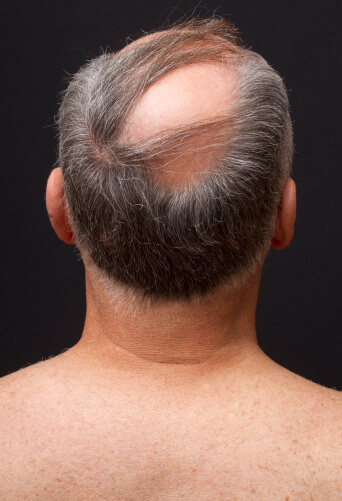 For many men, hair loss is a devastating part of growing older. A lucky minority, blessed with good hair genes, seem able to hang on to a fairly full head of hair well into their golden years. A relatively recent procedure known as scalp micropigmentation offers balding men yet another tool to help conceal the effects of hair loss.

In most of these men, the culprit is alopecia androgenetica, more commonly known as male pattern hair loss (MPHL), which usually manifests itself as hairline recession at the temples — the so-called receding hairline — coupled with a thinning of hair at the vertex or crown of the head. Eventually, MPHL will affect up to 70 percent of all men sometime during their lives.

Most men are willing to go to great lengths to either stop the hair loss or find ways to minimize the appearance of balding. Spray-on hair from a can is just one of the more outlandish ways in which men fight back against hair loss.

For some men and women as well, scalp micropigmentation, or SMP, has been the answer to a dream. It actually is an elaborate form of tattooing, although unlike the typical tattoo, in which pigment is injected five layers deep in the skin, in SMP pigment generally goes only into the two outermost layers of skin.

During the SMP procedure, which is usually performed in the offices of a cosmetic surgeon or a specialty hair salon, small dots of pigment matching your natural hair color are injected into your scalp in a hair-like pattern. The end-result is a scalp that appears at a glance to be covered by extremely close-cropped hair, a look that many men with relatively full heads of hair have already adopted. The illusion, of course, vanishes when someone touches the scalp and realizes that the appearance is purely cosmetic and that no hair stubble is actually there.

Proponents of SMP argue that it offers a solution for men who have lost all their hair and thus are no longer candidates for hair transplantation. It can also help fill in the gaps for men who are having hair transplanted from other parts of their head to balding areas.

Although the SMP procedure varies somewhat from practitioner to practitioner, Scalp Aesthetics, an international chain with nearly 30 offices worldwide, says that it uses a small single-use needle made to precisely replicate the size and shape of a patient’s hair follicle.

Bryce Cleveland, CEO and founder of Scalp Aesthetics, goes on to explain that his company uses a high-speed rotary machine modified to deliver a longer rotary stroke and implant, ¨which gives us the ability to implant more ink per second.¨ This technique allows Scalp Aesthetics technicians to inject more ink into the epidermis without going into the dermis, where the ink can bleed out and create a larger impression than desirable. Depending on a patient’s individual skin type, level of fat cells in the skin, suppleness, collagen structure, oil level, and follicle size, Scalp Aesthetics can vary the depth to which the ink or pigment is implanted.

The mechanism behind male pattern balding is fairly straightforward. Dihydrotestosterone, or DHT, a byproduct of testosterone, the primary male sex hormone, miniaturizes hair follicles, particularly in men and women who have a genetic sensitivity to DHT. Helping to facilitate the conversion of testosterone into DHT is an enzyme known as type II 5-alpha-reductase, which resides in the oil glands of hair follicles.

Follicles Shrink to Point of No Return

As hair follicles shrink smaller and smaller because of DHT, they eventually reach a point where they no longer can support hair growth, and hair loss results.

Another option open to men who are trying to hold the line against hair loss is a drug called finasteride, perhaps best known under the brand name Propecia. It short-circuits the hair loss process by blunting the effects of the type II 5-alpha-reductase enzyme, thus reducing the amount of DHT on the scalp. Less DHT means follicles stop shrinking, reducing hair loss drastically.

Because it is a hormonal drug, finasteride is available for use by men only. In clinical trials, finasteride has been shown to lower scalp levels of DHT by as much as 60 percent. In one such study, finasteride successfully halted hair loss in about 85 percent of the study’s male participants. Finasteride also stimulated some degree of hair regrowth in 65 percent of the men studied.

To maintain the hair saved by using finasteride, men using the drug must commit to using it daily for the rest of their lives. Once a man stops taking the medication, DHT levels return to normal, setting back in motion the hair loss process. Men who are either unwilling or unable financially to make a lifetime commitment to finasteride may want to look for an alternative option.

One such option is hair transplantation, a surgical procedure that has been around for roughly 60 years but has improved its technology and success rate significantly in recent years. The concept is fairly simple. The surgeon harvests hair from parts of the head where growth remains strong and transplants it into areas of hair loss. In the early days of hair transplantation, surgeons favored a technique that used plugs, skin grafts that contained anywhere from 15 to 20 hair follicles. These plugs were transplanted into areas of hair loss, creating an artificial look that was not unlike rows of corn planted in a field.

Today, most hair transplant surgeons harvest strips of hair-bearing scalp three to five inches in length. Each such strip is then broken down into hundreds of so-called micrografts, each containing one to five hair follicles.

These tiny grafts are then transplanted into areas of significant hair loss or areas that no longer sustain hair growth at all. Within three weeks after surgery, the visible hair attached to the transplanted follicles will fall out, but new hair growth can be expected in those areas within a few months of transplantation. The result is a much more natural look than that produced back in the days of hair plugs.

As previously explained, scalp micropigmentation can work together with these other forms of hair restoration to create a fuller look and to make areas of thin hair growth on the scalp less noticeable.