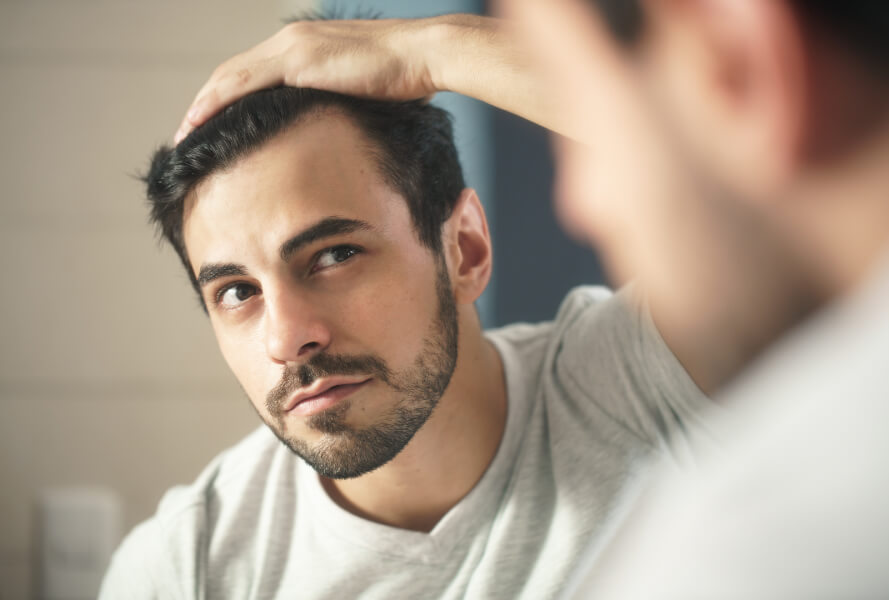 American Hair Loss Association says finasteride, also sold under the brand name Propecia, is the treatment of choice for male pattern baldness. But Rogaine (minoxidil) might be useful if you don’t respond to finasteride.

If you’re losing the battle to keep your hair, you’re probably in the market for a product that can turn the tide in your favor, allowing you to keep the hair that you’ve still got and promoting the growth of new hair to replace some or all of that you’ve lost.

You no doubt have heard of the two FDA-approved medications — Propecia and Rogaine — that are designed to help combat hereditary hair loss, but you don’t know which one is the more effective or better suited for you.

The American Hair Loss Association, a California-based organization dedicated to improving the lives of all those affected by hair loss, confidently proclaims finasteride — the active ingredient in Propecia — the first line of attack for all men interested in treating their male pattern baldness.

However, the AHLA believes that minoxidil, Rogaine’s active ingredient, still has an important role to play, particularly for those who have not had satisfactory results from Propecia or would like to add another product to their treatment regimen.

While Propecia appears to have a definite edge over Rogaine in the views of many hair loss specialists, you owe it to yourself to learn more about how each works, its side effects, and the long-term commitment that’s involved in using either or both of these products. To help you in that endeavor, what follows is a profile of both drugs.

Originally marketed as an oral drug to treat high blood pressure, minoxidil — the active ingredient in Rogaine — first attracted the attention of hair loss researchers because of one of its distinctive side effects: hair growth, often in unexpected places. Many users of the antihypertensive drug experienced increased growth and/or darkening of fine body hairs, as well as the growth of hair in such unlikely places as cheeks and foreheads. This prompted researchers to study the drug’s effect on hair growth when applied topically to the scalp.

In studying the hereditary hair loss process, scientists have discovered that age, heredity, and hormones work in combination to cause a shrinking, or miniaturization, of your hair follicles that eventually results in a shortening of the hair’s growing cycle.

Although the precise mechanism of minoxidil’s hair-growing properties is not fully understood, Rogaine’s website indicates that topical minoxidil enlarges hair follicles and reduces the miniaturization process. This, in turn, lengthens the hair cycle’s growth phase, allowing your hair to become longer and thicker.

With Rogaine, users may have to wait up to four months before they can detect visible hair regrowth. Once the product is in use and hair regrowth has been established, the user must continue to use Rogaine regularly or risk the loss of all new hair.

Rogaine’s side effects are generally mild and tend to disappear after a short time. They include burning, stinging, or redness at the application site. Users who experience rare but more serious side effects such as chest pain, dizziness, fast or irregular heartbeat, fainting, swelling of hands or feet, and difficulty breathing should immediately stop using the medication and contact their doctor.

Like minoxidil’s beginnings as an oral blood pressure medication, finasteride, the active ingredient in Propecia, was first introduced as an oral medication for the treatment of enlarged prostate, a condition known as benign prostatic hyperplasia, or BPH. As with minoxidil, men who participated in early drug trials of the BPH drug experienced unexpected hair growth, which prompted the drug’s manufacturer to study the possibility of marketing finasteride as an oral medication to combat hair loss.

While Rogaine targets the hair follicle itself, Propecia works at the hormonal level to combat hair loss. Propecia’s 1-milligram dose of finasteride inhibits 5-alpha-reductase, an enzyme that converts testosterone into a powerful androgen known as dihydrotestosterone, or DHT. Men who take Propecia regularly reduce their scalp levels of DHT by up to 60 percent. In terms of hair loss, this is significant because DHT is the culprit responsible for shrinking or miniaturizing the hair follicle, a process that eventually leads to baldness.

As with Rogaine, hair regrowth experienced while taking Propecia is likely to disappear once regular use of the drug is discontinued.

Side effects of Propecia may include a decline in sexual desire and/or ability. However, only a small percentage of users have reported experiencing this unwelcome side effect. Men who experience breast enlargement or tenderness, nipple discharge, a lump in the breast, pain in the testicles, or an inability to urinate should immediately discontinue use of the drug and contact their doctor.

So there in capsule form are the basic facts and figures about these two hair regrowth medications. Which still leaves you with the question about which one is likely to work better for you.

If you are going to use only one of these drugs, as you’ve already seen, the preponderance of the evidence seems weighted in favor of Propecia.

AHLA Views on Both Drugs

Propecia has received the AHLA’s stamp of approval as the more effective of the two drugs, a view it bases on its conviction that the only truly effective medically proven way to arrest hair loss is to lower DHT levels. Previous studies have indicated that regular use of Propecia can reduce DHT levels by up to 60 percent.

AHLA notes that because minoxidil has no effect on the hormonal process of hair loss, its results tend to be temporary and disappointing over the long run. However, the organization still recommends minoxidil for those who would like to add another product to their regimen as well as for those who have had no luck with finasteride. AHLA acknowledges that minoxidil is an effective treatment for a small percentage of its users, presumably some of whom are women who cannot take finasteride.

A Turkish study, published in a 2004 issue of Dermatology, also found that finasteride was slightly more effective than minoxidil in treating male pattern baldness, also known as androgenetic alopecia. However, researchers in that 12-month study concluded that both drugs were safe and effective in the treatment of mild to severe male pattern baldness.

Both Propecia and its generic equivalent, finasteride, can be ordered online from longtime facilitator eDrugstore.com. In business since the late 1990s, eDrugstore offers a limited selected of sought-after lifestyle medications from its headquarters in Tempe, Arizona. To learn more about Propecia and finasteride, visit eDrugstore’s Hair Loss page.