Propecia vs. Hair Transplants: What’s Right for You? 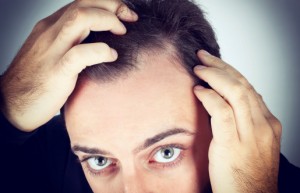 Propecia and hair transplant surgery are among the most popular options available to men fighting hair loss.

For men fighting the battle against hair loss, two of the most popular options available are drug therapy with an oral medication called Propecia (known generically as finasteride) and hair transplant surgery. Each option has its own advantages and disadvantages, and depending on where you stand in the fight against baldness and what you are hoping to achieve, one may be more appropriate than the other for you.

In fact, for some men looking to achieve just the right degree of hair restoration, both options are used in combination and work synergistically to produce the desired results. While the transplant returns hair to areas that are balding, the oral medication halts or slows further hair loss and may encourage new hair growth in thinning areas.

The primary culprit behind hair loss in both men and women is androgenetic alopecia, also known as male pattern balding — something of a misnomer considering that it affects women as well as men. While it is responsible for 95 percent of hair loss in men, it takes a somewhat more modest toll on women — estimated at up to 50 percent of all female hair loss.

Researchers have identified dihydrotestosterone, or DHT, as the primary trigger for the hair loss associated with androgenetic alopecia. DHT is a byproduct of testosterone, which is the primary sex hormone in men but is also present in lesser amounts in women. The conversion of testosterone into DHT is accomplished with the aid of the type II 5-alpha-reductase enzyme, which is found primarily in the oil glands of hair follicles.

DHT gradually miniaturizes hair follicles until they’ve become so small that they can no longer sustain hair growth. Reducing DHT levels has been shown to slow hair loss and in some cases promote new hair growth.

Propecia is the brand name for a prescription medication called finasteride, which helps to preserve the hair you have by blocking the effects of the type II 5-alpha-reductase enzyme, thus reducing DHT levels on the scalp. Without high levels of DHT to interfere with their natural function, hair follicles continue to thrive.

Not for Women or Children

Propecia should be taken by adult males only. Women and children should avoid all contact with the drug. Pregnant woman who accidentally touch or ingest the medication should consult a medical professional immediately, as the drug can cause birth defects in male fetuses. 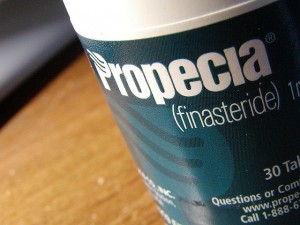 Propecia is an oral medication that has been clinically shown to slow or even stop hair loss.

If your hair loss is fairly minimal and occurring primarily at the crown of your head, Propecia or generic finasteride can significantly slow or even halt hair loss. Clinical trials have shown that a 1-milligram tablet taken daily can lower scalp levels of DHT by as much as 60 percent. For roughly 85 percent of those taking the drug in clinical trials, this sharp reduction in DHT levels was enough to halt hair loss. For 65 percent of trial participants, this reduction in DHT was sufficient to allow some hair regrowth.

Propecia might not be the ideal choice for you if you are concerned primarily about a receding hairline, as clinical trials have indicated that the drug is not very effective in stopping hair loss or promoting new hair growth in the temporal area.

Propecia also requires a lifetime commitment, because as soon as you stop taking the drug, the type II alpha-5a-reductase enzyme will be once again be free to convert testosterone into DHT, thus setting the hair-loss scenario back in motion.

On the upside, Propecia and its generic equivalent are much less expensive than hair transplant surgery, at least in the short run. For this reason, treatment with Propecia is within the financial reach of almost every man trying to hold back the hair-loss process. Of course, because the drug must be taken daily for the rest of your life in order to maintain the hair restoration it achieves, the total cost of this drug therapy may in the long run far outstrip the cost of transplant surgery.

As with most drugs, Propecia can cause side effects, most of which are mild and may disappear altogether as you continue to take the drug. However, for some men the side effects may be more severe and less tolerable when weighed against the drug’s benefits. The most common side effects include chills, cold sweats, confusion, dizziness, fainting, and lightheadedness. Among Propecia’s less common side effects are bloating; breast enlargement; hives; itchy skin; rapid weight gain; redness of the skin; skin rash; swelling of the face, lips, arms, hands, feet, and lower legs; and tingling of the hands or feet.

The up-front cost of hair transplant surgery runs from $4,000 to $15,000, according to WebMD.com. The cost obviously depends on the amount of hair to be transplanted and the area of the country in which the procedure will be done. Available since the 1950s, this form of surgery has become more sophisticated and more widely successful over the past 60-plus years. 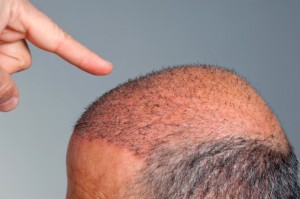 New hair growth can be seen in this area of the scalp into which micrografts were implanted.

Gone are the days of the larger skin grafts known as plugs, each of which contained 15 to 20 hair follicles. When implanted, these so-called plugs produced an artificial look that made it easy to spot a transplant recipient. Today, surgeons harvest a three- to four-inch strip of hair-bearing scalp from an area of your head that still has robust hair growth.

This strip of scalp is then broken down into hundreds of tiny grafts, each of which contains one to five hair follicles. These micrografts are then transplanted into areas where hair has thinned or is absent altogether. While the hairs in these grafts will fall out in two to three weeks after surgery, new hair growth can be expected to begin in these areas within a few months of your surgery.

Most hair transplant surgery is done in the doctor’s office under local anesthetic to numb the areas of the scalp from which hair is being harvested and into which grafts are being implanted. For the first several days after transplant, your scalp is likely to be extremely tender, and you probably will need to take pain medication to reduce the discomfort. Your surgeon may also prescribe antibiotics to reduce the risk of infection at both harvesting and transplant sites.

If you decide that Propecia or finasteride is the answer for you, eDrugstore.com is a reliable supplier of both the brand name and generic formulations of this drug. Based in Tempe, Arizona, eDrugstore is a member of the Secure Medical family of online drugstores and offers a wide array of FDA-approved medications.

All drugs sold by eDrugstore are sourced from licensed U.S. pharmacies. If you have a doctor’s prescription for Propecia or finasteride, you can fax or scan and email it to eDrugstore with your order. If you don’t have a prescription, eDrugstore can arrange an online consultation with one of its contract physicians, who will write a prescription if he or she decides it is appropriate based on your overall medical history and health.