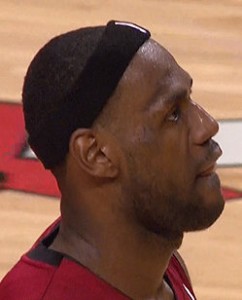 Lebron James has been known for killer basketball skills for years now, but as time has gone by, he’s also become known for something else, his receding hairline.
It’s become the butt of a few jokes here and there, but the star has taken it all with a sense of humor.

Lebron’s Tweet
The King’s even been cracking a few jokes about it himself, posting a tweet that poked fun at his own balding head.

Had a dream my hairline was back! Woke up and went to bathroom, turned on light slowly. Same ol story. Damn! Lol #wishfulthinking

That’s what he posted on Twitter, which goes to show the man has more than some of the world’s greatest basketball skills. He’s also a good sport.

The Timeline of Regression
People can even check out the progression of his receding hairline through a humorous “scientific” timeline that can be found on the Internet.

This one really shows the stages he’s gone through since 2003. At one point he wore his headband like normal athletes. But he keeps pushing it back to follow his hairline, and now it’s more like a halo, barely on top of his head.

Barkley and Shaq have both been encouraging him to “come home,” meaning they want him to join the bald-guy group they apparently think they’ve started..

LeBron refuses, however, and he’ll continue sporting his hair and headband combination for as long as he wants. Chuck and Shaq, he says, are just jealous he has some hair left.

Conclusion
Now we can all see that these jokes are in good fun, and Lebron takes it with a winner’s attitude, but it’s not something we all want to have to deal with.

Isn’t there something LeBron James can do about it? Many people have asked, why doesn’t the King just shave it all off? Surely a bald head is more desirable than a “retreating” hairline at 27, as one columnist put it.

There’s no shame in going bald, but he could also go with a remedy like Propecia, which will target the harmful DHT that is often overproduced in balding men, as a result of higher testosterone levels.

Hey though, at least the bald guys are the manliest, right?