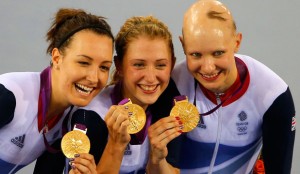 This year in the London Games, we were treated to a variety of inspiring moments and wondrous spectacles. From the opening ceremonies to the most heroic moments on a victor’s podium, there has been a lot to see and remember.

But Joanna Rowsell’s particular story is worth telling on its own, especially for all the men and women who might come to eDrugstore looking for hair-loss treatments. We all go through tough times, but sometimes the very source of our present travails can be the source of our future strength. Joanna Rowsell’s story is the tale of just such an event.

A Childhood with Alopecia
When she was just 10 years old, Joanna noticed that her right eyebrow was disappearing. The hair was simply falling out. Next thing she knew, both eyebrows were thinning, and she was losing hair on the back of her scalp.

Just months later, Joanna was completely bald. As her teenage years approached, she began to be more afraid of others’ comments, but she says that surprisingly, everyone was polite. She was still shy, though, and kept mostly to her books and school work.

Her friends were supportive, but when they started talking about boys and dating, she didn’t follow along. Instead she separated herself, fearing rejection and not having the confidence to embrace her femininity.

Although her teenage years were hard, Joanna says her study habits helped build the work ethic that would eventually take her to gold at the London Games.

The Beginnings of Joanna’s Bicycling Career
Joanna hadn’t really raced a bike before she was 15. In fact, though she knew how to ride a bike, she was a complete novice when it came to racing.

But a British team of talent scouts came to her school, and when they saw her in 2003, they decided she had talent. She enjoyed biking, and she wanted to learn to race, so she joined up at 15. Just a few seasons later, she was pursuing national titles.

Biking, she says, improved her confidence because it doesn’t matter what’s underneath her helmet. On the track, all that matters is winning.

Joanna was able to ride out this newfound boost of confidence, applying the work ethic she’d learned already from her studies. By 2008, just five years after starting to race, she’d won a World Championship title in the team pursuit. 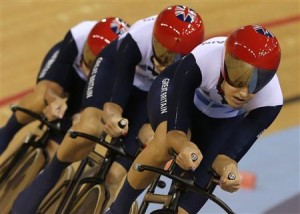 The London Games
By this year, Joanna Rowsell had made it to the Olympic Games, where she would be competing with her teammates and friends, Laura Trott and Dani King.

And in a story of triumph, this trio of young women pushed through to victory over the US team by a remarkable gap of six seconds.

Following her victory, Joanna ran onto the stage with “barely enough time to wipe off her sweat” to receive her medal. She hadn’t thought about putting on her wig, as she’s much more comfortable than she used to be.

Without even thinking about it, she’d become an inspiring icon for alopecia sufferers everywhere, especially those who are young women.