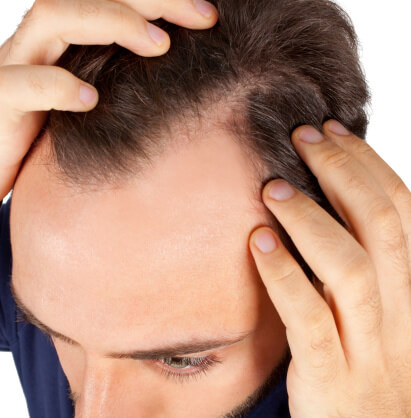 Fighting a losing battle against hair loss? For whatever consolation it might offer, you’re not alone. According to the American Hair Loss Association, roughly two-thirds of American men have experienced an appreciable loss of hair by the age of 35. That percentage jumps to 85 percent among men who are 50 and older.

If you’re among that hearty minority that is barely fazed by hair loss, more power to you. However, if you’re like most men faced with hair loss, your options today are far more varied than they were only a few decades ago.

If you tackle the problem early, it’s possible that you can significantly slow the hair loss process or even stop it dead in its tracks. If your hair loss is already extensive, you still have a few options available to you that can help you to make the most of what hair you have left.

Also on the horizon — and holding out hope for men who have not yet begun to lose their hair — are some experimental treatments using stem cells that in time may provide still other options for the follically challenged.

Fundamental to any discussion of how to fight male pattern baldness is a basic understanding of just how it does its dirty work. Heredity plays a significant role in the process, giving some of us a genetic sensitivity to dihydrotestosterone, or DHT, a derivative of testosterone, the primary male sex hormone.

The conversion of testosterone into DHT is facilitated by the Type II 5-alpha-reductase enzyme, which resides in the oil glands of the hair follicle. Although the process is not fully understood, scientists do recognize that those sensitive to DHT experience a gradual miniaturization of the hair follicle to the point that it can no longer support the growth of hair. According to AHLA, scientists do know that DHT shrinks hair follicles, particularly in those sensitive to the hormone, and that hair follicles generally continue to thrive when DHT is suppressed.

For those who are only beginning to experience hair loss, the more quickly you take action the more hair you’ll likely be able to hold onto for awhile.

Diet: One of the first and most readily available means of defense against hair loss is good nutrition, according to MensFitness.com. While diet alone won’t stop hair loss, it can slow the process at the same time that it helps to keep the hair you do have looking its best. You can do your hair a favor by following an overall diet that is rich in protein and healthy fats. Make sure you’re getting a full complement of B vitamins, which support the formation of hair cells and thus promote hair growth. Foods rich in both protein and B-complex vitamins include fish, poultry, eggs, pork, and leafy greens, such as kale and spinach.

Medications: After decades of so-called baldness cures that turned out to be little more than snake oil treatments, medical science developed some medications that really produced results. Minoxidil and finasteride are the generic names for two hair-loss medications that have been clinically shown to fight hair loss. Of the two, finasteride is by far the most effective, according to the AHLA.

A topical solution, minoxidil debuted first under the brand name Rogaine. Clinical studies have demonstrated that minoxidil slows the loss of hair and in some cases may regrow hair. Although it is not as effective as finasteride, the AHLA recommends minoxidil’s use in patients who don’t respond favorably to finasteride. Minoxidil is a vasodilator, which means it increases blood flow — and thus oxygen supply — to hair follicles, thus creating optimal conditions for hair growth.

An oral medication, finasteride, sold under the brand name Propecia, works by inhibiting the effects of the Type II 5-alpha-reductase enzyme, which triggers the conversion of testosterone to DHT. A 1-milligram tablet of finasteride taken daily has been clinically shown to lower DHT levels up to 60 percent. More than 85 percent of men taking Propecia have been able to stop the progression of hair loss, and about 65 percent have experienced a significant increase in hair growth.

Hair Replacement Surgery: This option has become much more acceptable as the surgeons who perform it have come up with new techniques that are far superior to the original transplantation of hair plugs, which produced a result far from natural in appearance.

Today, you can opt to have strips of hair harvested from the back of your head. From that strip, your surgeon ¨dissects every hair graft under a microscope, and then plants the individual grafts onto hair-thin areas of your scalp with tiny incisions,¨ according to MensFitness.com.

Yet another option is known as follicular unit extraction, or FUE. The surgeon uses a tiny punch to harvest Individual grafts, which are then transplanted into areas of thin hair growth. Healing time is accelerated by using the FUE approach.

Laser Combs: The verdict on laser-comb technology, still relatively new, is not yet in, but some say it has at least helped them to hold onto the hair they have. The only treatment of this type to win FDA approval thus far is the HairMax Laser Comb, which uses laser phototherapy to energize hair follicles and thus lengthen their lifespan.

Hair Replacement Strategies: Still doing brisk business are the purveyors of hairpieces, toupees, and wigs. For men who have already lost most or all of their hair, this represents pretty much the last option currently available. This also appeals to men who for whatever reason don’t want to pursue some of the other modes of treatment.

In an interview with ABC News, Robert Bernstein, M.D., clinical professor of dermatology at Columbia University, said: ¨Hairpieces and wigs remain an important option for patients who either can’t tolerate the medications, don’t want to take something systemically, don’t want the hair transplant surgery, [or] don’t have enough hair for transplantation.¨

Stem Cell Therapy: New advances in stem cell research have prompted some knowledgeable observers to predict that a viable therapy using stem cells to regrow hair may become available within the next few years. Among the most promising developments on this front was a 2014 announcement from Spanish researchers that they’d found a way to manipulate macrophages — a type of white blood cell — to reactivate stem cells in hair follicles, stimulating hair regrowth.