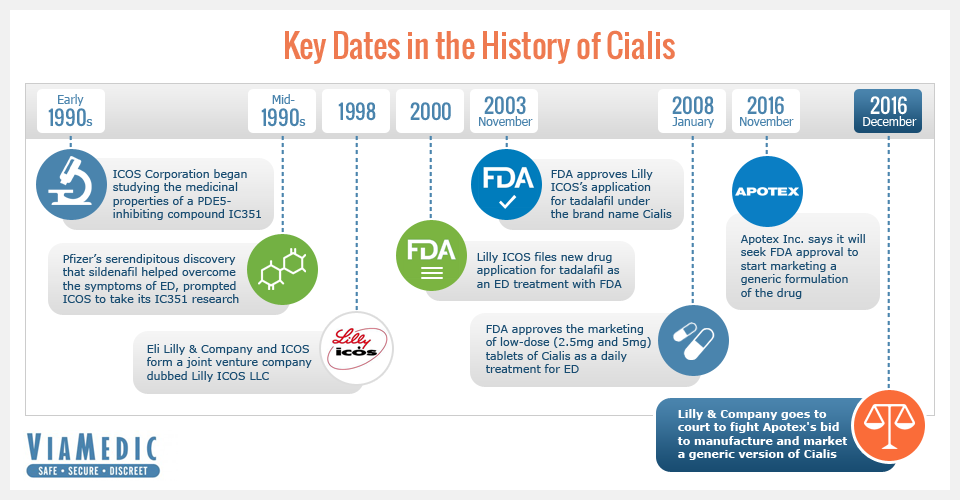 Q: How does Cialis differ from the other PDE5 inhibitors on the market?

A: Cialis is the only oral ED medication available in two distinct formulations, both of which have tadalafil as their active ingredient. First approved by the FDA in late 2003, Cialis for use as needed is available in 5-, 10-, and 20-milligram tablets. A daily version of the drug, available in 2.5- and 5-milligram tablets, won FDA approval in 2008.

Q: What sets Cialis for use as needed apart from all other PDE5 inhibitors?

A: Nicknamed the “weekend drug,” Cialis for use as needed is the longest-lasting ED drug currently on the market. Its effects last up to 36 hours after the drug has been taken. By contrast, most other PDE5 inhibitors only last four to six hours.

Q: Will the arrival of generic Viagra have any effect on Cialis prices?

A: Until the late-2017 introduction of a generic formulation of Viagra, American consumers will have had only brand-name PDE5 inhibitors to choose from. Although Viagra is not as long-lasting as Cialis, the lower price of its generic version might lure some Cialis customers away from their preferred drug. The new entry in the market should start a gradual downtrend in prices for oral ED drugs.

Q: When will a generic version of Cialis be introduced?

A: This question is currently before the courts. Lilly contends that an ICOS patent on tadalafil gives it market exclusivity until April 2020. Several generic drug manufacturers contend that patent is invalid and unenforceable. Ultimately, the courts will decide or broker a mediated agreement between all parties, as happened in the Viagra generic case.

The wait for a generic version of Cialis — originally expected to arrive either late in 2017 or early 2018 — appears likely to be delayed at least for a while. Eli Lilly & Company, which holds the patent on the popular ED drug, is digging in for a legal fight that could protect its market exclusivity until 2020.

Cialis comes in two different formulations — one longer-lasting version for use as needed and another to be taken daily — both of which have the same active ingredient — tadalafil. The on-demand formulation was approved by the U.S. Food and Drug Administration in late 2003, while daily Cialis won FDA approval in early 2008.

In early December 2016, Lilly told a federal court in Virginia that a bid by Apotex Inc. to market a generic version of Cialis infringed on a patent held by Lilly subsidiary ICOS Corporation. That patent doesn’t expire until April 2020. Apotex had informed Lilly on November 22, 2016, that it considered the ICOS patent invalid and unenforceable and thus had filed an abbreviated new drug application with FDA to market generic Cialis.

Lilly also announced that it was in the process of filing legal challenges to potential Cialis generics proposed by nine other generic drug manufacturers. Lilly’s legal battle to protect its Cialis market exclusivity until April 2020 calls into question predictions that a generic version of the drug would soon be brought to market. Until the court case is settled, the outlook for a generic formulation of the popular ED drug is uncertain.

Regardless of whether a generic version of Cialis comes to market anytime soon, it’s clear that the overall market for the oral ED drugs known as PDE5 inhibitors will be shaken up soon by the arrival of a generic formulation of Viagra in late 2017. That medication, which will be marketed by Teva Pharmaceuticals U.S.A., will put downward pressure on the prices of all PDE5 inhibitors, not just brand-name Viagra.

Most PDE5 Inhibitors Work the Same

The individual brand-name PDE5 inhibitors — Viagra, Levitra, Cialis, Staxyn, and Stendra — vary slightly from one another in chemical makeup, but they all work pretty much the same. They all have similar — although not identical — side effects as well.

The arrival of Teva’s generic version of Viagra (sildenafil citrate) will give all ED drug users a new and less expensive option. This very likely could attract buyers who previously were using Cialis, Levitra, or one of the other PDE5 inhibitors.

Such changes are already being seen in a number of markets outside the United States where Pfizer’s patent for Viagra, the first of these medications to hit the market, has long since expired. Such markets include much of the European Union, China, and Canada.

With Pfizer’s patent on the little blue pill having expired in those markets, generic formulations of sildenafil citrate, Viagra’s active ingredient, have become available at much lower prices than those for which the brand-name drug was previously sold.

This added competition affects not only Viagra but also its brand-name competitors, such as Cialis. The availability of less expensive generic alternatives to any of these medications is almost certain to lure many customers away from the brand-name drug of their choice.

After all, the drugs in this category work very much the same way, although each has its own unique chemical structure. Many men get satisfactory results from any of these drugs and may have settled on a particular brand pretty much by chance. For such customers, the switch to a cheaper alternative is a no-brainer.

Even for customers who selected a particular PDE5 inhibitor because it worked faster, lasted longer, or had fewer side effects, the availability of a less expensive alternative could be enough to get them to switch.

To prepare for this coming period of increased competition — much of it from generics — Eli Lilly & Company, the patent-holder for Cialis, has taken steps to protect its interests and hang on to whatever profits it can extract from its Cialis franchise.

In May 2014, Lilly announced a licensing agreement with Sanofi S.A., the French-based pharmaceuticals giant. Under the terms of that accord, Sanofi would sell an over-the-counter formulation of Cialis in the United States, Europe, Canada, and Australia after certain patents expire. Obviously, Sanofi will need to obtain authority from the relevant regulatory agencies in each country before an OTC version of Cialis can be marketed.

If such approvals can be obtained, and that is by no means certain, Lilly’s agreement with Sanofi would allow the U.S. drugmaker to continue profiting from its interests in Cialis through the licensing fees it would receive from Sanofi. As of mid-2017, the Cialis OTC venture had not yet materialized.

Lilly’s gambit with the Sanofi licensing deal is not the first such move by the manufacturers of PDE5 inhibitors to take one of their drugs off prescription. However, if it goes through, it will be the first one to find success. In November 2008, Pfizer withdrew an application to switch Viagra from a prescription to a nonprescription drug in the European Union. It did so in response to some misgivings expressed by the regulatory authority that governs the sale of all medications within the European Union.

Ironically, Pfizer’s U.S. patent for Viagra doesn’t expire until April 2020, despite the fact that the little blue pill was the first of this new wave of impotence drugs to hit the market, arriving on U.S. pharmacy shelves in 1998. But Pfizer, like Lilly, is hedging its bets in an effort to continue to profit from Viagra for as long as possible.

In December 2013, Pfizer struck a deal with Israeli-based Teva Pharmaceuticals that will allow the latter to begin marketing a generic formulation of Viagra (sildenafil citrate) in December 2017 or even earlier under certain circumstances. The generic agreement came out of a larger agreement settling litigation against a move by Teva that raised a legal challenge to Pfizer’s patents on Viagra.

Because Pfizer’s Viagra patent will not expire until 2020, Teva will be required to pay Pfizer a royalty for the license to produce the generic version of the drug as long as Pfizer’s patent remains in force.

Levitra, the second of the PDE5 inhibitors to be introduced on the U.S. market, is co-marketed in the United States by Bayer HealthCare Pharmaceuticals and GlaxoSmithKline. The drug’s active ingredient is vardenafil hydrochloride. The U.S. patent on Levitra will expire in 2018, but the patent expiration covers only the Levitra brand-name formulation of the drug. To get more profit out of its investment in the vardenafil-based drug, Bayer and GSK in 2011 introduced an orally soluble version of the drug that is marketed in the United States and elsewhere under the brand name of Staxyn. Because it was introduced several years after Levitra, Staxyn will retain patent protection long after the Levitra patent has expired.

As previously noted, Cialis, which has edged past Viagra in U.S. sales, also tweaked its product line to maximize its profits from its considerable research and development investment in the drug. As originally introduced, Cialis was marketed as a longer-lasting drug with a potential duration of effectiveness up to 36 hours, far longer than the four to five hours’ duration of action offered by Viagra and Levitra.

For those who preferred the luxury of a longer-lasting pill, Cialis became the obvious choice. However, not content to rest on its laurels, the pharmaceutical scientists behind Cialis five years later introduced a lower-strength version of the drug to be taken daily. In exchange for a commitment to taking the drug daily, Lilly promised users of Cialis for daily use that they would be ready for action whenever the time for romance was right.

In late 2014, Lilly struck an agreement with Sandoz that allowed the latter to begin marketing a generic version of Cialis a few months in advance of the expiration of Lilly’s patent on the drug in Brazil. Already included in Sandoz’s line of products in Brazil was a generic formulation of sildenafil citrate, the active ingredient in Viagra.

Until the introduction of a generic version of Cialis, men who find that one of its formulations works best for them will have to purchase the ED drug from a local brick-and-mortar pharmacy or through a reputable online drugstore, such as eDrugstore.com. Based in Arizona, eDrugstore is a member of the Secure Medical family of online drugstores and sells only FDA-approved medications that are sourced from licensed U.S. pharmacies. If you would like to learn more about the prescription medications available through eDrugstore, click here to get started.